John Brant escapes prison after authorities jailed him for a murder he did not commit. He ends up out west where, after giving the local lawmen the slip, he joins up with an outlaw gang. Brant learns that one of the outlaws, a man named Bob Jones, committed the murder that Brant was sent up for. 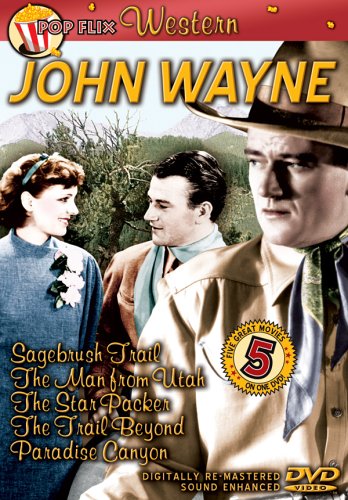 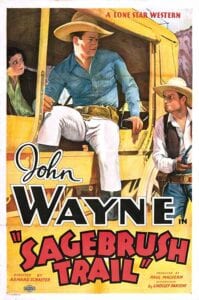 Sagebrush Trail, or if you are from the United Kingdom, An Innocent Man, begins with the police hunting for an escaped prisoner. Inmate John Brant (John Wayne), who was imprisoned for murder, has escaped. We see Brant attempting to flee from the police so that he can find the true killer for the crime he has been convicted for. When he is knocked from his horse in a pond, he attempts to outwit the pursuing law men by breathing under water through a reed.

When the police get wise to his plan, they shoot at the reed until it floats to the top. Once it does so, the lawmen believe they have killed their man and leave. In reality, Brant has held his breath and when he comes to the surface, he is greeted by another outlaw Joseph Conlon, who goes by the name of Jones.

Jones invites Brant to come and live at his outlaw gang’s hide out in an abandoned mine. Once there, Brant is put to work as the cook and immediately begins to rub some of the other outlaws in the group the wrong way. During a trip into town for supplies, Brant meets Sally Blake, the local girl that Jones is sweet on. Brant writes a secret note to Sally, warning her that the gang intends to rob her family’s store that night.

Sally finds the note and warns the authorities, who prepare to stop the robbery. When Brant and Jones arrive that night to rob the place, Brant is shot by the police before he and Jones make their escape without getting what they came for.

After recovering from his gun shot wound, Brant continues to subvert the gang’s attempts to rob and steal, usually using Sally to return the stolen money and goods. Several members of the gang begin to get suspicious of Brant, including Jones. Worse, Jones begins to get jealous of Sally and Brant, and hints that jealousy could cause him to kill. During one of his conversations with Brant, Jones confesses to killing the man that Brant has been convicted of killing. Brant is able to control his desire for vengeance due to his friendship with Jones and the fact that Jones didn’t even know that an innocent man was sent to prison for his crime.

The law starts to become suspicious of Sally, and after she refuses to identify either Brant or Jones from their wanted posters, they begin to follow her to see if she leads them to the outlaws. When Brant seeks to have a secret rendezvous with Sally, Brant is followed by Jones and Sally is followed by the law. They all arrive at a saloon. Sally helps Brant and Jones escape, but Jones directs Brant into an ambush by the other gang members.

When Jones tells Sally what he has done, Sally tells Jones that Brant was the man sent to prison for the murder that Jones committed and that only Brant’s friendship with Jones has prevented Brant from doing something about it. Jones is struck by his conscience and rides off to save Brant from the ambush. Meanwhile, Sally tells the law where the ambush is to save potentially both men.

Jones arrives in time to save Brant, and they escape in a covered wagon from the outlaws, who begin a chase. The law shows up and chases the outlaws. There is a lot of chasing. In the end, the outlaws are defeated, Jones is mortally wounded, and the law catches up with both Brant and Jones. Before dying, Jones tells the law that he is the actual killer and Brant is innocent. That appears to be good enough for the law because they let Sally and Brant walk off together, presumedly to live happily ever after.