Tony Manero is a 19 year old Brooklyn native who lives for Saturday nights at the local disco where he’s king of the club. However, outside of that, his life isn’t all that great. At home, Tony fights constantly with his father while also competing with the pedestal family placed his brother on when he became a priest. To make matters worse, he’s in an unsatisfying dead-end job at a small paint store. Things begin to look up for the big lug when he spots Stephanie Mangano in the disco, and starts training with her for the club’s dance competition. While Stephanie dreams of a world beyond Brooklyn, her plans to move to Manhattan will change Tony’s life forever. 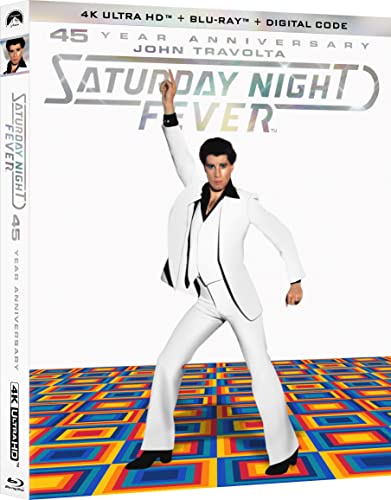 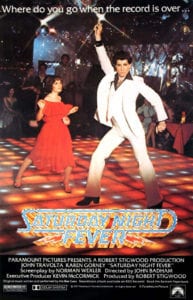 In Saturday Night Fever, we meet Tony Manero. He’s an Uber-arrogant 19-year-old Italian kid from Brooklyn. He’s got a walk that makes women swoon, a perfectly blow-dried head of hair, and a dead end job at a hardware store selling paint to old ladies.

On weekends, he and his buddies dance it up at 2001 Odyssey, the local disco watering hole and strip club. While Tony may not have a penny to his name, he’s the sexiest dancer on the Christmas-lit dance floor. All the ladies want to dance and have sex with him, but not necessarily in that order.

In between dance practices and showing off at the club, Tony and buddies fight rival gangs (although his buddy, Bobby, pusses out). However, they do bang loose women in the back of Bobby’s car, but only for ten minutes at a time. Going longer wouldn’t be fair to the other guys when it’s their turn; women’s feelings be damned!

Tony’s big brother, who’s a lousy actor, brought shame on the entire family when he quit the priesthood. Although his brother’s big speech telling us why he quit was cut from the movie, you don’t miss anything because that actor can’t act his way out of a paper bag.

Tony asks his on-again/mostly off-again girlfriend, Annette, to practice for the upcoming dance contest. But during one of the practice sessions, he spots the sexy, equally arrogant and uglier Manhattan-wannabe, Stephanie, and decides she’s a better partner…and we’re not just talking dance partner.

So, the horn dog pulls out all the stops to woo Stephanie to dance with him. It’s then he learns she’s slightly more sophisticated than he is too. Eventually, Tony realizes what a loser he really is, and that he’s headed down the wrong path in life.

The big dance contest arrives, and Tony wins in his iconic all-white dancing suit, but he thinks the club management fixed the event. While Tony may be a dancing king, he also realizes he’s the king of a bunch of douchebags.

He leaves angry, and nearly rapes his dance partner, because, you know, she deserves it. She kicks him in that little head that thinks more than the one on top of his shoulders, and runs away. Tony’s friends arrive with Annette, and they proceed to pull a train on her in the back seat while Bobby and Tony drive to the middle of the Brooklyn Bridge.

Bobby decides he’s done being a wuss so he starts doing his best Nadia Comenici on the bridge girders. He falls off it, mercifully, to his death. Tony decides to leave his buddies after talking to the police about the accident. He walks all the way to Manhattan in the middle of the night because his buddies would never actually drive him there.

Tony apologizes to Stephanie, so of course she invites her would-be rapist into her apartment. A mere eight hours after the assault, she forgets the whole traumatizing event because rape victims really do that. Tony decides to move to Manhattan, and start a different path in life with the classic Sylvester Stallone-directed sequel, Staying Alive. In that one, Tony is an even more arrogant ass, but dances to the same story; only this time, he’s on Broadway, and with way sexier and more beautiful actresses.