Seen through the eyes of a squad of U.S. soldiers, the story begins with World War II’s historic D- Day invasion, then moves beyond the beach as the men embark on a dangerous special mission. Captain John Miller must take his men behind enemy lines to find Private James Ryan, whose three brothers have been killed in combat. Faced with impossible odds, the men question their orders. Why are eight men risking their lives to save just one? Surrounded by the brutal realities of war, each man searches for his own answer – and the strength to triumph over an uncertain future with honor, decency and courage. 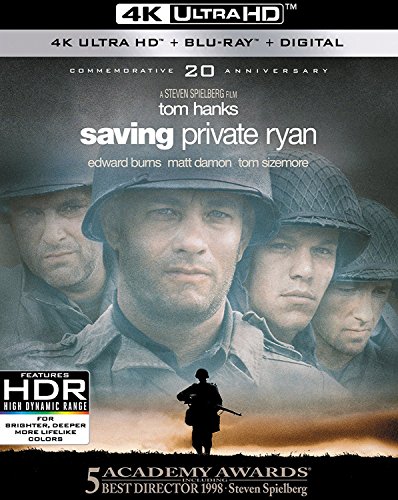 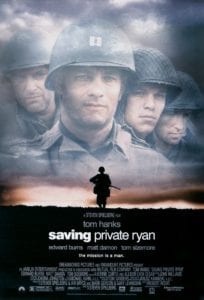 Saving Private Ryan begins with an old veteran falls to his knees weeping during a visit with his family to the Normandy American Cemetery and Memorial. The movies flashes back to the morning of June 6, 1944. American soldiers nervously approach Omaha Beach as part of the Normandy Invasion.

The American troops suffer heavy losses as the fortified German defenses on the cliffs above the beach easily mow down many with their machine guns. The 2nd Ranger Battalion’s Captain Miller manages to get a group of men to breakout from the beach towards its cliffs. Eventually, they take control of the beach from the Germans, but face down among the dead lies a man with the name Ryan, S written on his backpack.

Back in Washington, D.C., the War Department learns that three of four brothers died in the battle. The remaining one, James, is somewhere in the chaos with the 101st Airborne Division. General George Marshall reads Abraham Lincoln’s Bixby letter to the men in the room, and then orders the remaining Ryan son home.

The head to Neuville, and meet up with a some of the 101st which is currently fighting some of enemy. A sniper kills Private Caparzo, and Private Jackson returns the favor taking him out. They find a Private James Ryan, but he’s not the man they are looking for. Miller learns that the Ryan they are looking for is in Ramelle guarding a strategically important bridge.

Outside the town, Miller orders his men to take out a German machine gun position at a derelict radar station. The Germans kill Wade in the onslaught. Upham convinces Miller not to kill the lone German survivor, and let him go.

Private Reiben no longer has confidence in Captain Miller’s leadership, and decides to desert the remaining men. He gets into it with Sergeant Horvath over the statement. To ease everyone’s tensions, Miller reveals he’s a high school English teacher back home. This revelation settles a friendly bet his men have going. Reiben stays.

Once they arrive in Ramelle, they find Ryan with some paratroopers preparing to defend the bridge against an incoming German attack. Miller informs Private Ryan that his brothers are dead, and he has orders to bring him back home safe. While Ryan is saddened over his brother’s deaths, he refuses to leave his position.

Miller and his men join the paratroopers to defend the bridge. They decide to ambush the entering Germans with improvised materials along with their remaining ammo. The 2nd SS Panzer Division soon approach the bridge with many soldiers and two tanks and two tank destroyers.

Many men on both sides are killed including Privates Jackson, Mellish and Sergeant Horvath. Fear overcomes Upham, and he does nothing to help. As Captain Miller attempts to blow up the bridge, the German soldier Miller freed at the radar station shows up and shoots Miller; leaving him mortally wounded.

Miller uses his last energy to grab the bridge detonator, and fire his pistol at the approaching tank. The tank reaches the bridge, but an American P-51 Mustang flies overhead, and stops it in its tracks. More American units arrive to the scene, and help rout the Germans.

Now that the Germans are in retreat, Upham seizes the German soldier who shot Miller and some other of his comrades. He kills the German in revenge, and lets the others go free.

Privates Reiben and Ryan approach Captain Miller as he speaks his last words to Ryan, “James…earn this. Earn it.”

Ryan stands over the dead Captain’s body, and the film switches back to the present day. Ryan is the old man from the beginning of the film. He asks his wife if he was a good man. She replies that he is. Ryan salutes Captain Miller’s grave before leaving with his family.