Saw begins when two men, Adam and Dr. Lawrence Gordon wake up in a bathroom. They discover the infamous Jigsaw Killer has taken them prisoner. The men must escape before time runs out, otherwise, they will face the deadly consequences. 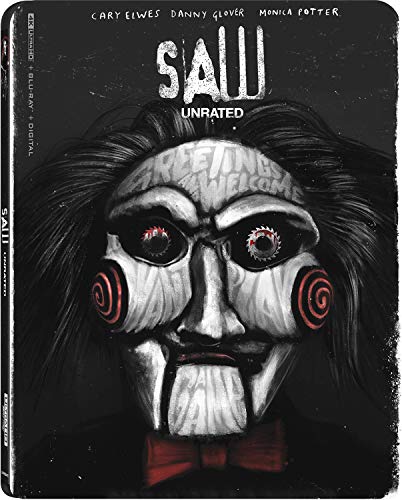 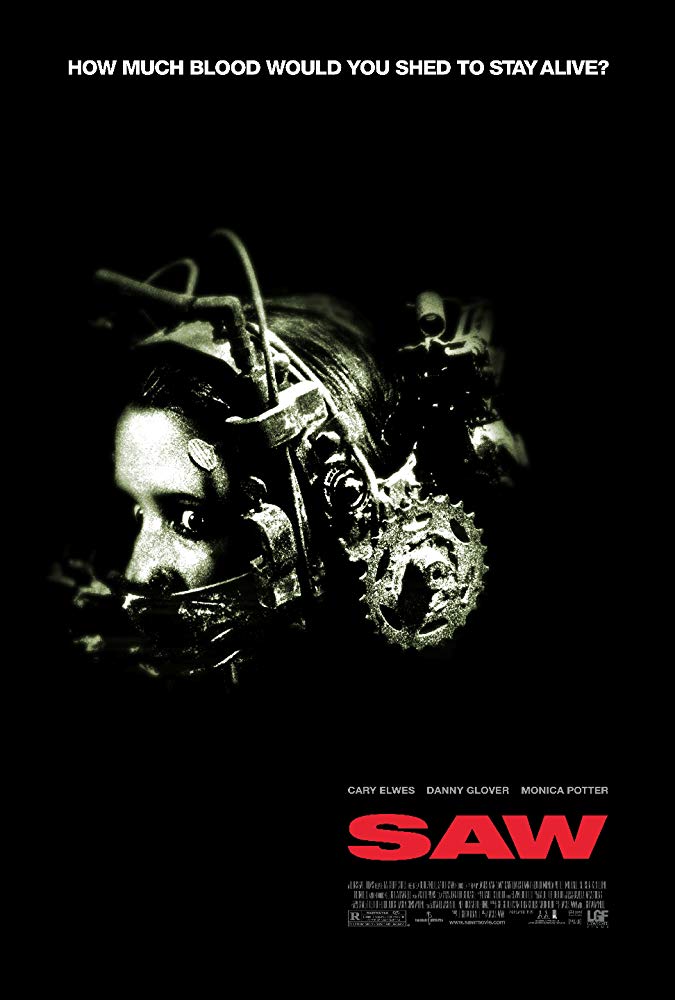 Saw begins with photographer Adam (Leigh Whannell) waking up in a bathtub with his ankle chained to a pipe. Across the room from him, Dr. Lawrence Gordon (Cary Elwes) is also chained by the ankle. In between the two men lies a dead body holding a revolver and a microcassette recorder. Both men find a microcassette in their pockets, and Adam retrieves the recorder. The tape tells Adam to escape the room while Lawrence’s tape tells him to kill Adam by six o’clock or his wife and daughter will be killed and he will be left to die in the room. Adam searches the room and finds a bag containing two hacksaws inside the toilet, which they both use to try to cut through their chains. Adam’s saw breaks, and Lawrence realizes that the saws are actually meant for their ankles, not the chains. Lawrence reveals their captor is likely the Jigsaw Killer, whom Lawrence was once accused of being.

The film then flashbacks to Lawrence being approached by two detectives, David Tapp (Danny Glover) and Steven Sing (Ken Leung), while he is treating a cancer patient, John Kramer (Tobin Bell). The detectives explain that Lawrence’s penlight was found at one of Jigsaw’s crime scenes. Lawrence provides an alibi that clears him, but he is asked by the police to watch the testimony of Amanda Young (Shawnee Smith), a heroin addict who is the only known survivor of one of Jigsaw’s traps. Amanda believes that Jigsaw helped her escape the killer’s trap.

The film jumps back to the present as Lawrence’s wife Alison (Monica Potter) and daughter Diana (Makenzie Vega) are being held captive at their home. Their captor watches Adam and Lawrence through a hidden camera. At the same time, the Gordon house is being watched by Tapp from the outside. Tapp has been fired from the police department and has become obsessed with the Jigsaw investigation. In the time since Lawrence’s detention, Tapp used the videotape of Amanda’s “game” to find Jigsaw’s warehouse. He and Sing went to the warehouse and were able to apprehend Jigsaw as he was about to kill another man with a drill trap. However, Jigsaw was able to escape the detectives by slashing Tapp’s throat and killing Sing with a shotgun trap. Tapp is convinced that Lawrence is Jigsaw and continues to stalk him in his own personal investigation.

Back in the bathroom, Lawrence finds a box containing two cigarettes, a lighter, and a one-way cellphone. The discovery causes him to recall his abduction in a parking garage by an individual with a pig mask. Lawrence and Adam decide to stage Adam’s “death” using a cigarette dipped in the corpse’s poisoned blood. However, the plan fails when Adam is electrically shocked through his ankle chain revealing that he is still alive. While lying in pain, Adam recalls his own abduction which occurred in his photo development room. Adam found a mysterious puppet and was attacked by a man wearing the same pig mask that attacked Lawrence.

Back at the Gordon house, Allison is forced to call Lawrence at gunpoint. Alison tells Lawrence not to trust Adam. Adam reveals to Lawrence that he was hired to take pictures of Lawrence by someone who believed that the doctor was having an affair with one of his medical students. In fact, Lawrence was visiting the student the night he was abducted. Adam describes the man who hired him, and Lawrence realizes it is the obsessed former detective Tapp. Some of the photos that Adam took were in the bag containing the hacksaws. While looking at the photos, he realizes that there is photo that he did not take in the bag of a man staring out of a window of the Gordon house. Upon looking at the man, Lawrence identifies the man as Zep (Michael Emerson), an orderly that works at Lawrence’s hospital.

Back at the Gordon house, the clock strikes six, and Zep moves to kill both Alison and Diana. After Zep calls Lawrence in the dingy bathroom, Alison is able to free herself and fights with Zep for his gun. The struggle attracts Tapp’s attention outside. He rushes into the house and saves Alison and Diana and chases Zep into the sewer. Tapp and Zep get into a struggle which results in Tapp being shot in the chest.

Back in the bathroom, Lawrence is aware of only the gunshots and screaming from the phone. In his panic, he loses hold of the phone and drops it, unable to retrieve it. In his desperation, he saws off his own foot and shoots Adam with the corpse’s revolver. Zep enters the bathroom to kill Lawrence according to the rules he has been given by Jigsaw. However, Adam is still alive and bludgeons Zep to death with the toilet tank lid. Lawrence slowly crawls out of the room, leaving Adam behind.

Adam searches Zep’s body for a key and finds yet another tape. The tape reveals that Zep was a Jigsaw victim himself, who had ingested some poison. He too was following Jigsaw’s rules to obtain an antidote for the slow-acting poison. As the tape ends, the corpse in the middle of the room stirs. The corpse reveals himself as John Kramer, the cancer patient from earlier in the film. Kramer is the real Jigsaw Killer. He reveals that the key to Adam’s chain went down the bathtub drain when Adam first woke up. Adam attempts to shoot Jigsaw with Zep’s gun, but Jigsaw shocks him with a remote. Jigsaw turns to leave and turns off the lights. He yells “Game Over” before sealing the door and leaving a screaming Adam to die.