We learn Jigsaw is back in Saw II after a new murder victim is discovered with all the signs of his handy work. Detective Eric Matthews begins a full investigation before apprehending the killer with little effort. However, for Jigsaw, getting caught is just another part of his plan. Eight more of his victims are already fighting for their lives, and now it’s time for Matthews to join his sadistic game. 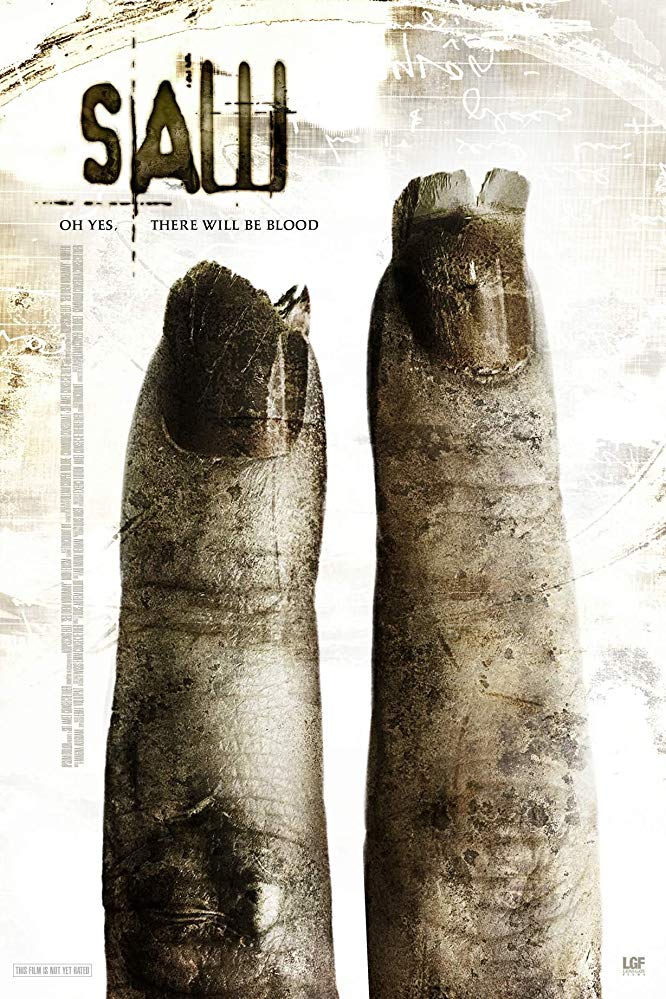 Saw II begins with Michael Marks (Noam Jenkins) awakening with a spike-filled mask locked around his neck. A videotape left by Jigsaw (Tobin Bell) informs the informant that to unlock the device, he must cut into his own eye to get to the key. A timer begins a countdown of sixty seconds, and Michael finds the scalpel, but cannot bring himself to cut into his eye to get the key. When the timer reaches zero, the mask closes killing him.

Shortly thereafter, Detective Allison Kerry (Dina Meyer) is assigned to investigate Michael’s murder. While at the scene, she finds a message from her former partner Detective Eric Matthews (Donnie Wahlberg) and calls him. Matthews reluctantly agrees to join the investigation with Kerry and Officer Daniel Rigg (Lyriq Bent). The three lead a SWAT team into the factory which produced the lock from Michael’s trap. Once there, they find and arrest John Kramer, the Jigsaw Killer. Kramer is weak from the cancer that is spreading throughout his body.

In Jigsaw’s lair, the officers find several computer monitors which are showing eight people trapped in an unknown house. Jigsaw’s latest victims are Xavier (Franky G), Jonas (Glenn Plummer), Obi (Timothy Burd), Gus (Tony Nappo), Laura (Beverly Mitchell), Addison (Emmanuelle), Jigsaw’s only known survivor Amanda Young (Shawnee Smith), and Matthews’ estranged son Daniel (Erik Knudsen). Jigsaw informs the officers that a nerve agent that is currently filling the house will kill all eight of the victims within two hours but assures Detective Matthews that if he follows the rules of his own game, by simply talking with Jigsaw, his son will survive. Kerry urges Matthews to play the game to buy time for the computer tech team to arrive and trace the video signal.

In the house, the victims are informed by a microcassette recorder that antidotes to the nerve agent are hidden throughout the house. He informs them that one is in the room’s safe, and they have the combination with the “numbers in the back of their mind.” Xavier ignores a warning note and tries to use provided with the cassette on the door. A bullet is fired though the peephole on the door which kills Gus. The remaining seven victims go through the now open door and search the house for more antidotes but have little success.

The group discovers another door that leads to the basement. Once there, Obi is forced into a crematory oven to obtain two antidotes. During the game, it is revealed that Obi assisted in their abductions. While in the oven, Obi accidentally activates one of the traps and is burned alive which also destroys the antidotes.

During their search of the house, the victims discuss the various connections between them and eventually determine that they have all been to jail, with the exception of Daniel. In another room, Jigsaw’s test for Xavier is to go into a pit full of hypodermic needles and retrieve a key to a door in two minutes. Xavier refuses and pushes Amanda into the pit, forcing her to do it. She finds the key, which she gives to Xavier, but he runs out of time to unlock the door containing the antidote.

Meanwhile, Matthews converses with Jigsaw. The killer reveals that it was his unsuccessful suicide after his cancer diagnosis that inspired his death games. Matthews is frustrated by the conversation and begins to destroy several of Jigsaw’s things to provoke the killer, but he fails to incite any reaction from Jigsaw. When the computer tech team arrives, Jigsaw finally reveals the connection between the victims – Matthews has framed each of them for various crimes in the past.

Back in the house, Xavier has abandoned the other members of the group and returns to the safe room. Once there, he discovers a colored number on the back of the neck of Gus’ body. Realizing the answer to Jigsaw’s first clue, Xavier kills Jonas with a spiked bat for his number. After he acquires that number, he begins to hunt the other victims in the house.

The nerve agent overtakes Laura and she dies, but not before she finds the clue revealing Daniel’s identity. Addison and Amanda abandon him, but Amanda eventually returns after she finds Jonas’ body. Addison finds a glass box that contains an antidote. To reach it, she must place her arms into arm holes which are lined with blades. When she does so, her arms become trapped. Xavier enters the room, but instead of killing her, he simply reads her number and leaves her to die with the trap.

Amanda and Daniel find a tunnel in the safe room, which leads to the bathroom from the first film. Daniel collapses in the bathroom, and Xavier catches up to both of them. Xavier moves to kill them, when Amanda points out that he won’t be able to the read the number on the back of his own neck. Xavier slices a piece of skin off the back of his neck. Afterwards, he moves in to kill Amanda, and Daniel jumps between them and kills Xavier by slashing his throat with a hacksaw.

Back in Jigsaw’s lair, Matthews begins to assault the killer when he sees his son being chased by Xavier on the video. He forces Jigsaw to lead him to the house where his son is being held. Jigsaw’s sitting area is revealed to be a working elevator, which he and Matthews use to leave the factory. The tech team tracks the video’s source, and Officer Rigg leads his team to a house, where they find a serious of VCR’s playing previously recorded images.

Kerry realizes that their victims’ games have all occurred before they found Jigsaw. When the two-hour timer runs out, a large safe opens, revealing a bound Daniel with an oxygen mask. Meanwhile, Matthews enters the house that Jigsaw led him to alone and eventually finds the bathroom. Once in there, he is attacked by a person wearing a pig mask and knocked unconscious. When he wakes, he finds himself shackled to a pipe. A tape recorder plays a message from Amanda that reveals that she is Jigsaw’s accomplice and that she intends to continue the killer’s work after he eventually dies from cancer. As the tape ends, Amanda appears in the doorway and says “Game Over” before sealing the door, leaving Matthews to die.