Jigsaw is back and ready to play his games with damaged person. This time, Jigsaw has kidnapped a doctor, Lynn, whose game is to keep Jigsaw alive until another man completes his game. That other man, Jeff, is a despondent father who has lost his son in a drunk driving accident. When Jeff is given a chance to seek revenge against all those people who were involved in the death of his son and the injustice that followed, what will Jeff do? Kill or forgive? 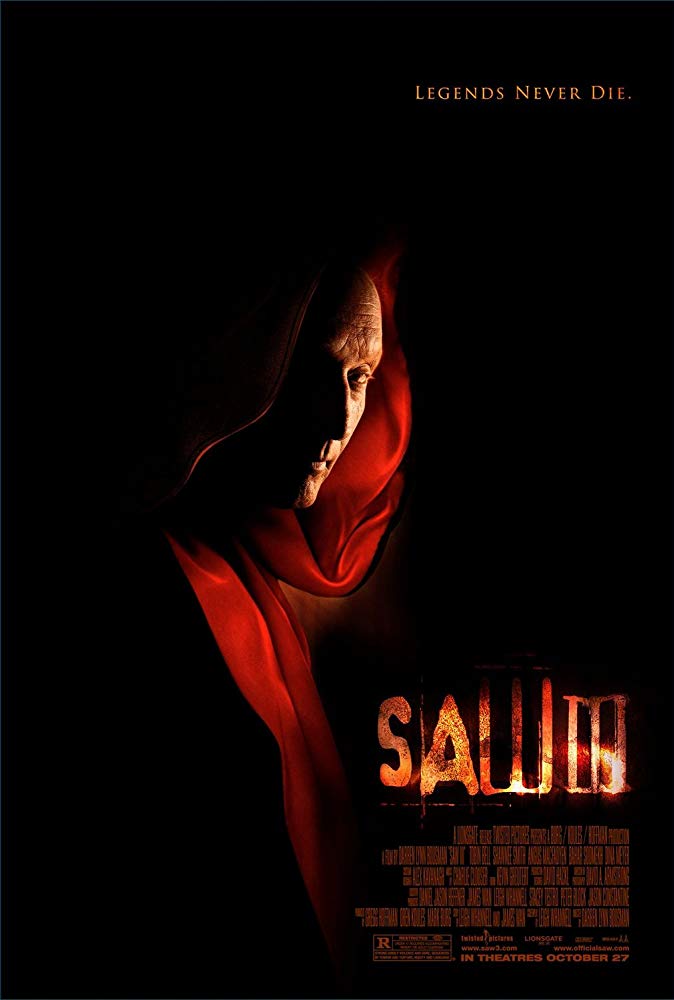 Saw III begins with Detective Eric Matthews (Donnie Wahlberg) still shackled in the bathroom where Amanda Young (Shawnee Smith) left him at the end of the film. Matthews breaks his foot with a toilet lid to escape his shackle.

Six months later, a SWAT team discovers what they believe to be a Jigsaw game. The victim, identified as Troy (J. Larose), was forced to rip chains from his body to escape from a bomb. Detective Allison Kerry (Dina Meyer) is assigned to the case. Once on the scene, she notices that the exit door was welded shut, which goes against Jigsaw’s pattern of giving his victims a chance to survive the game. She watches a videotape of the game and is abducted by an unknown person. Kerry wakes to find a harness hooked into her ribs. She figures out that she needs to retrieve a key from a beaker of acid to unlock the harness. The detective reaches in and gets the key but can’t remove it from the beaker. Time runs out and Kerry is killed.

Next, Dr. Lynn Denlon (Bahar Soomekh) is kidnapped from the hospital that she works at. She is brought to a bedridden John Kramer (Tobin Bell), the Jigsaw killer. His apprentice, Amanda, is present and locks a shotgun collar around Lynn’s neck. The collar is connected to Kramer’s heart rate monitor and is set to fire the gun if either Jigsaw dies or the doctor moves out of range. Lynn is instructed by Amanda to keep Kramer alive until another victim has completed his game. The other victim, Jeff Denlon (Angus Macfadyen), wakes up in a box and is instructed to complete some tests that will lead him to the person who killed his son, Dylan (Stefan Georgiou), in a drunk driving accident. It is revealed that after his son’s death, Jeff became a shell of a man and neglected his daughter, Corbett (Niamh Wilson).

The first leads Jeff into a meat freezer. In the freezer he finds Danica Scott (Debra Lynne McCabe) naked and chained at the wrists between two poles. Danica was the only witness to the accident but refused to testify in court. While Jeff attempts to reach a key to free Danica, she is sprayed by ice-cold water from the poles. The key is behind some frozen bars, but before Jeff can reach it, Danica freezes to death. The next test involves Judge Halden (Barry Flatman), the man who gave Dylan’s killer only six months in jail.

The judge is chained at the neck to the bottom of a pit. Rotted pig corpses are dropped into a rack of circular saws and slowly fill the pit when Jeff enters the room. The judge convinces Jeff to help him, and Jeff sets fire to a furnace full of his son’s toys to retrieve a key. Jeff saves the judge before he drowns in the pig remains. Jeff’s third test involves Dylan’s killer, Timothy Young (Mpho Koaho), who is strapped to a machine called “The Rack”. The torture device is designed to twist his limbs and neck until they break. The key to release Timothy is tied to the trigger of an enclosed shotgun. Jeff retrieves the key, but the shotgun fires killing the judge. Jeff attempts to stop the machine, but he is too late, and Timothy’s neck is broken, killing him.

Back at Jigsaw’s bedside, Lynn performs an emergency surgery to relieve the increased pressure on Kramer’s brain. She uses a standard ordinary drill to perform the unsanitary surgery. Amanda watches and begins to grow jealous of the interactions between Lynn and Kramer. However, when Kramer begins to have a seizure, Amanda helps Lynn. While the two women perform the surgery, Kramer dreams about another woman and declares his love for her. This declaration upsets the unstable Amanda and she leaves the room. She finds a letter that further upsets her. When Amanda returns to the Jigsaw’s bedside, she informs Lynn that Jeff has completed all his tests but refuses to remove Lynn’s collar. Amanda pronounces that she no longer believes in Jigsaw’s philosophy and is the one who has been creating inescapable traps for her victims. She also reveals that she fought with Detective Matthews after he escaped his game in the bathroom and left him for dead.

Amanda refuses to listen to Jigsaw’s warnings and shoots Lynn. Jeff arrives at that moment and it is revealed that Lynn and Jeff are husband and wife. Jeff shoots Amanda with a gun that Jeff recovered after the tests. Jigsaw reveals to a dying Amanda that Lynn’s test was actually Amanda’s test. He reveals that he was always aware of her death traps with no hope for escape and was unwilling to let a murderer continue his legacy.

Jigsaw then turns to Jeff and offers to call an ambulance for his bleeding wife if Jeff will agree to take one last test. Jeff agrees, and Jigsaw tells him that he can either kill Kramer or forgive him. Jeff tells the dying man that he forgives him, but then slashes his throat with a power saw. The door to the room seals shut and a tape of Jigsaw begins to play. The tape reveals that Jeff has failed his final test by killing Jigsaw, who is the only person who knew the whereabouts of Jeff’s kidnapped daughter. Jeff was also unaware of the heart rate monitor on Lynn’s collar, so as Jigsaw dies, his wife’s collar fires, killing her.