Jigsaw and his apprentice Amanda are dead. Now, upon the news of Detective Kerry’s murder, two seasoned FBI profilers, Agent Strahm and Agent Perez, arrive in the terrified community to assist the veteran Detective Hoffman in sifting through Jigsaw’s latest grisly remains and piecing together the puzzle. However, when SWAT Commander Rigg is abducted and thrust into a game, the last officer untouched by Jigsaw has but ninety minutes to overcome a series of demented traps and save an old friend or face the deadly consequences. 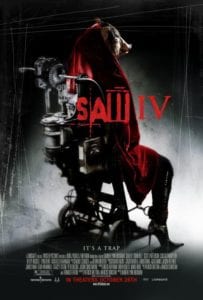 Saw IV begins during the autopsy of John Kramer (Tobin Bell). A wax-coated microcassette is found in his stomach by the medical examiner. The tape is turned over to Detective Mark Hoffman (Costas Mandylor) who believes that Jigsaw intends to continue his games from beyond the grave. The film then jumps to two men awakening in a dungeon chained at the neck to a winch. One man has his eyes sewn shut and the other has his mouth sewn shut. The blinded men panics and accidentally activates the winch. The blind man swings wildly at the other man, who is forced to kill the blind man to get a key from around his collar to free himself.

Four days after the death of Detective Allison Kerry (Dina Meyer) in the last film, a SWAT team led by Hoffman and Officer Daniel Rigg (Lyriq Bent) find her body in dark basement. Hoffman is afraid of a Jigsaw bobby trap, but Rigg rushes in through an unsecured door when he sees Kerry’s body on the surveillance robot’s camera. FBI Agents Peter Strahm (Scott Patterson) and Lindsey Perez (Athena Karkanis) also arrive to investigate the scene after they receive a message and a key from Kerry prior to her death.

Strahm speculates that there is a third Jigsaw accomplice after noting the physical limitations of Kramer and the deceased Amanda Young (Shawnee Smith) in hoisting Kerry’s body into the air. He focuses his attention on Rigg who has developed an obsession with saving people in the six months since the disappearance of Detective Eric Matthews (Donnie Wahlberg).

That night, Rigg is attacked in his home after his wife leaves him. When he awakens, he receives a recording from Jigsaw that informs him that Hoffman has been abducted and Matthews is still alive. The recording goes on to state that both men have ninety minutes to save themselves, and Rigg’s part of the game is too learn to let go and overcome his obsession to save people. Rigg finds a woman named Brenda (Sarain Boylan) strapped in a chair in his living room. He accidentally activates a trap then begins to slowly pull her scalp off. Rigg manages to free her, but she attacks him after she is released forcing Rigg to kill her. A recording informed her that she needed to kill Rigg in order to avoid being arrested for her crimes.

Jigsaw’s next recording leads Rigg to a motel where he is directed to abduct the owner, Ivan Landsness (Marty Adams). Rigg discovers that Landsness is a serial rapist and forces the man into one of Jigsaw’s traps. Landsness can release himself from the trap as long as he blinds himself with metal rods to both of his eyes. Ivan only activates one of the rods, so when the timer runs out, he is dismembered by the other portions of the trap.

Rigg is next led to a school where he once investigated the abuse of a young student by her father, Rex (Ron Lea). The child eventually recanted her statements, and her mother Morgan (Janet Land) supported her husband through the process. Rigg finds both parents impaled back to back by several arrows. Rigg plays a recording by Jigsaw that instructs Morgan to free herself from the violence of her husband by pulling the arrows out of her body, allowing her husband to bleed out from his mortal wounds. Morgan pulls the arrows out one by one as her husband pleads with her to stop. After Rex dies, Rigg gives her the key to free herself and pulls the fire alarm for the building, notifying authorities to respond to the area.

Strahm continues to investigate and responds to Rigg’s apartment after Brenda is killed. He finds a clue that points him in the direction of Kramer’s ex-wife, Jill Tuck (Betsy Russell). Strahm believes that she has information concerning Jigsaw’s third accomplice. Jill reveals that Kramer worked in civil engineering and property development prior to his turn to murder. Jill informs Strahm that Kramer lost his way after she had a miscarriage when she was attacked by the drug addict Cecil Adams (Billy Otis) at her rehab clinic. Jill informs Strahm that the loss of the child destroyed their marriage and drove Kramer to begin making his Jigsaw life tests. A flashback reveals that the first victim of the Jigsaw contraptions was Adams who forced his way out of a trap by slicing his face with knives. Adams killed himself by trying to attack Kramer and falling into another trap.

Strahm is next led to the Landsness’ motel where he learns that the room that the rapist was killed in was rented out to a lawyer named Art Blank (Justin Louis). Blank is Kramer’s former business partner and the man who survived the winch trap with his mouth sewn shut. It is revealed that Blank disappeared two weeks prior, and he is currently monitoring Jigsaw’s game involving Matthews and Hoffman. At the school, Strahm learns that all of the victims, along with Jill, were former clients of Blank. Strahm and Perez find a Jigsaw puppet and a tape recorder in another classroom at the school. The puppet plays a cryptic message for Perez that foretells that Strahm will kill an innocent person. The puppet then explodes and sends shrapnel into Perez’ face. She is hospitalized, leaving Strahm to continue his investigation alone.

Strahm returns to the holding cell where Jill is held and furiously questions her. He connects her information to a prior clue about the Gideon Meatpacking Plant, the location of Rigg’s final test. Strahm arrives at the plant after Rigg, but ends up following Jeff Denlon (Angus Macfadyen), one of the victims of the previous film. Strahm discovers him in the sickroom with the dead bodies of Kramer, Young, and Denlon’s wife Lynn (Bahar Soomekh). Denlon demands his daughter back and tries to attack Strahm. Strahm kills him in self-defense. It is revealed to the audience that this happened moments after the events in Saw III.

Meanwhile, Blank pulls out a device that will free himself, Matthews, and Hoffman when the ninety minute clock expires. Matthews is able to see that Blank has a device attached to the back of his neck that has a pair of pincers that will sever his spine if it is used before the ninety minutes is up. Matthews is given a gun with one bullet by Blank. When Rigg arrives at the door to the room before the ninety minutes is up, Matthews uses the bullet to shoot Rigg through the door to prevent him from entering. Wounded, Rigg enters anyways, releasing two overhead ice blocks that swing down and crush Matthews’ head. Rigg shoots and kills Blank believing he is responsible for the traps.

Blank’s tape recorder reveals that the men would have all survived if Rigg would have overcome his obsession to save everyone. It is then revealed that the third Jigsaw accomplice is Hoffman who unstraps himself from his electric chair and walks to the door to the room. He leaves Rigg to bleed to death and seals Strahm in the sickroom of the plant. The film then cuts to Hoffman at the morgue, revealing that Kramer’s autopsy took place after the events of the film.