John Kramer, the notorious serial killer Jigsaw is dead. Detective Mark Hoffman is deemed a hero after he saves a young girl and “escapes” one of Jigsaw’s games, or so it seems. FBI Special Agent Peter Strahm also survives one of Jigsaw’s traps but is suspicious of Hoffman after an injured Agent Lindsay Perez says the detective’s name. While Strahm investigates Detective Hoffman’s past, five people, who helped burn down a building which was supposedly abandoned, face a series of tests set up by Jigsaw. 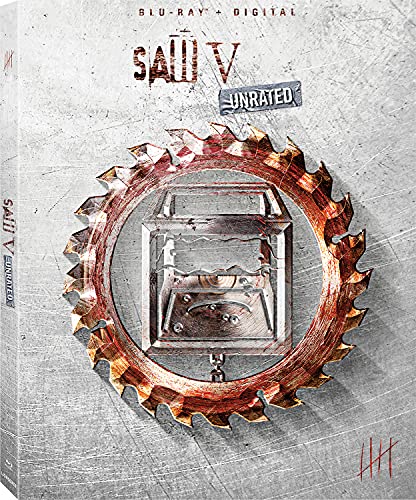 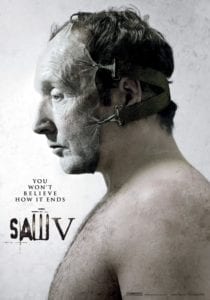 Seth Baxter (Joris Jarsky), a convicted murderer, wakes up chained to a table underneath a pendulum blade. A videotape plays nearby that informs him that he can release himself by crushing his hands between two machine presses. As the pendulum begins to lower and sway, Seth inserts his hands into the presses. However, the blade still swings down and cuts him in half as someone watches through a hole in the wall.

Sometime later, FBI Agent Peter Strahm (Scott Patterson) escapes from being locked in the sickroom at the meatpacking plant at the end of Saw IV. He crawls through a hidden doorway but is attacked in the tunnel by Detective Mark Hoffman (Costas Mandylor) in a pig mask. Strahm wakes up with his head sealed in a box being filled with water.

Strahm survives by performing a tracheotomy with his own pen from his pocket. A short time later, Hoffman delivers Corbett Denlon (Niamh Wilson), the kidnapped daughter of Jeff and Lynn Denlon (Angus Macfadyen and Bahar Soomekh) from the previous film. Hoffman tells police that he and Corbett are the only survivors and is surprised when paramedics bring out Strahm alive.

Shortly after, Hoffman is promoted to detective lieutenant and credited with closing the Jigsaw cases during a press conference. He finds a note in his office that reads “I know who you are” and learns of the death of Strahm’s partner Lindsey Perez (Athena Karkanis) while taking Strahm’s phone.

A short time later, Strahm tells Hoffman that Perez’s last words were Hoffman’s name. Strahm also questions how Hoffman escaped from the plant and appears to be unsatisfied with the detective’s explantion. Strahm is also visited by his boss, Dan Erickson (Mark Rolston), who puts him on medical leave to recover from his near-death experience. Strahm is suspicious of Hoffman and takes the Jigsaw case files of past victims and begins researching them on his own.

Meanwhile, five people awaken in an underground sewer level with collars connected to mounted blades locked around their necks. The keys to unlock the collars are in individual glass boxes across the room. A Jigsaw videotape begins to play and tells the participants that they are all connected and implores them to not follow their instincts and to work together during the game.

They are also told that they need to solve the puzzles in each room and leave before the timer runs out, otherwise a jar of explosives will detonate in the corner of each room. The arsonist Mallick (Greg Bryk) activates the timer and everyone rushes to get their respective key. However, the wires tied to their necks are all connected so only one participant may go at a time. Everyone manages to reach their keys except for Ashley (Laura Gordon), a former fire inspector, who is decapitated when the collars retract.

In the next room, the four survivors learn that the overhead jars contain keys to three bomb shelters. The investigative journalist Charles (Carlo Rota) strikes Mallick and begins smashing the jars one by one. The real estate vice president Brit (Julie Benz) and the city planner Luba Gibbs (Meagan Good) each find a key and Charles finds the last key. Luba strikes Charles and Mallick takes his key, leaving the journalist to die in the explosion.

In the third room, the three survivors discover five short electrical cables that need to be connected to a bathtub full of water to unlock the next door. Luba attacks Mallick to use his body to close the circuits, but Brit stabs her and Mallick and Brit use her body to complete the circuit and open the door.

In the fourth room, Mallick and Brit find a machine with five circular saws and a beaker requiring ten pints of blood to open the door. Brit tries to use the keys from the first room to open the door and realizes that all five keys are the same. Mallick notes the five holes and saws and realizes that the group of five were meant to work together to survive the game and if they had, they would have survived each of the games as a group. Brit also realizes that all five of them were involved with a building fire that killed eight people. Resigned to their fate, Brit and Mallick place their arms into the traps and allow the saws to cut them to provide enough blood for the jar. They are successful, and the door opens.

Meanwhile, Strahm learns that Baxter killed Hoffman’s sister and was released from prison on a legal technicality. In an act of revenge, Hoffman abducted and killed Baxter, using the pendulum trap to frame Jigsaw (Tobin Bell). In a flashback, Jigsaw learns of Hoffman’s ploy and abducts the detective. Jigsaw blackmails Hoffman into working with him and they set up several games together while Jigsaw was alive.

Strahm realizes that he was not meant to survive his Jigsaw trap and only Corbett and Hoffman were meant to “escape” the plant from the previous film. As Strahm begins to fixate on Hoffman, his obsession draws the attention and concern of Erickson. Erickson’s concerns are further fueled when Jill Tuck (Betsy Russell), Jigsaw’s ex-wife, reports to Erickson that she believes Strahm has been stalking her. Jill also receives a box and a videotape from Jigsaw’s lawyer as part of his will. What is in the box is unknown.

Hoffman reaches out to Erickson and shares Strahm’s theory that Jigsaw had a second accomplice besides Amanda Young (Shawnee Smith). Erickson tries to call Strahm, but Hoffman, having Strahm’s cellphone, turns it off. Erickson decides to put a tracker on Strahm’s cellphone which leads him to the observation room of the game involving the five participants. Erickson discovers Strahm’s cellphone and his own personnel file, which have both been planted by Hoffman. Erickson finds a bleeding Brit on the floor. Erickson calls for an ambulance and puts out an all-points bulletin on Strahm, suspecting that he is the Jigsaw accomplice.

Meanwhile, Strahm follows Hoffman into an abandoned building. He finds a room with an underground room containing a clear box filled with shards of broken glass. Strahm finds a tape that urges Strahm to enter the box, but he doesn’t listen to the tape completely and ambushes Hoffman when he enters the room. The two men struggle and Strahm throws Hoffman into the box and closes the lid, which triggers the room doors to seal shut.

In the glass box, Hoffman points to the tape, which warns Strahm that if he does not enter the box he will die, and Jigsaw’s legacy will become his. The box then slowly lowers into the floor as the walls of the room begin to close in on Strahm. Strahm unsuccessfully attempts to escape through the ceiling but is ultimately is crushed to death as Hoffman watches safely from the box in the floor.