In Scarface, Tony Camonte is a violent and ambitious gangster on the rise in the Chicago underworld. Once he kills his boss, Big Louie, on behalf of the South Side mobster, Johnny Lovo, Tony becomes his second in command. However, Lovo warns Tony to stay from North Side boss named O’Hara. Tony is pretty aggressive when it comes to getting rid of any opposition in his path. Soon, he takes a fancy to Lovo’s girlfriend, and gets her under his thumb too. Eventually, Tony takes control of the South Side away from Lovo, and sets his sites on the North side. The beginning of the end comes for him when he finds best friend, Guino Rinaldo, with his sister in her apartment. That leads to a fatal mistake Tony will regret. 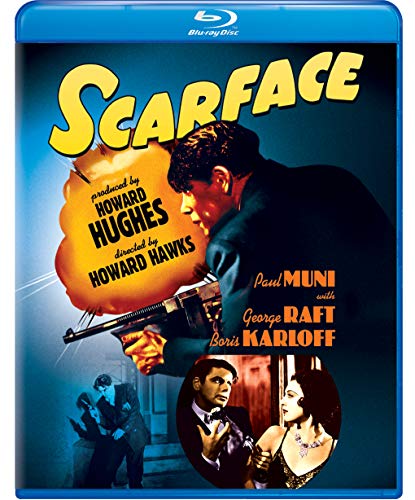 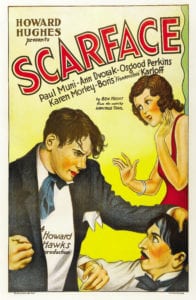 Tony Camonte is an Italian immigrant in 1920’s Chicago, working for mafioso Johnny Lovo. Johnny orders Tony to kill Louis Costillo, the city’s boss on the south side of town. This allows Johnny to take control of the area with Tony as his right-hand man.

Tony has free reign as Johnny’s second in command, but Johnny warns Tony not to mess with the north side of town which Irish gangs control. However, Tony doesn’t heed the warnings. He starts leaning on bars belonging to the gangster O’Hara. This causes him to run afoul of the thugs there, and it sparks the interest of the police too.

Johnny knows Tony’s ambitious, and might try to take him over too, but for now, he still feels he’s in control. At the same time, Tony begins to set his sites on Johnny’s girlfriend, Poppy. She only pays attention to him as his reputation grows in the city. Eventually, Poppy comes calling to Tony at his apartment which she considers gaudy, but he takes it as a compliment. Through his window, you can see a neon billboard for Cook’s Tours with the slogan: “The World is Yours,” and Tony takes this to heart by looking to take control of the North Side.

Tony orders his right-hand man, Guino Rinaldo, to kill Irish mob boss O’Hara at the florist’s shop that he runs his racket out of. This murder brings out the wrath of the other North Side gangs, and they come for Tony in force with Thompson submachine guns.

Tony is not only NOT frightened from the attacks, but he falls in love with their guns they use on him. He picks one up with wonder, and starts using them for his own mayhem. Tony takes his men (and a bunch of these guns) to the North Side to kill his remaining rivals; even impersonating police officers if need be. Eventually, Tony kills the last boss up north, Tom Gaffney at a bowling alley; solidifying his control of the North Side.

He and his men head back south victoriously to celebrate at a club where Johnny and Poppy sit at a table for two. Tony interrupts them, and sits down with them. It’s perfectly clear to Johnny that Poppy chose Tony over him, and he knows that’s not all that Tony is looking to take of his. So, Johnny orders a hit on Tony, but the attempt on his life fails.

Tony escapes from a car chase when he crashes his car into his attacker’s vehicle, and they all roll off the road. Tony calls up Guino, and the two head to Johnny’s place, and quickly kill him. With no more rivals, Tony is now Sausage King of Chicago. However, Tony still leaves town for a bit with Poppy while things cool down.

Unfortunately, for our anti-hero, Tony’s actions have not gone unnoticed. The public’s outcry after his Valentine’s Day massacre has increased pressure on the police to do something. Eventually, Tony makes a mistake that allows the police to nab him. In a fit of jealous rage (due to a possible incestuous relationship with his 18-year-old sister, Cesca), Tony kills Guino after he finds Guino and Cesca alone together. Unbeknownst to Tony, the two were secretly married sometime earlier, but that probably wouldn’t matter to him anyhow.

The police issue a warrant for Tony’s arrest in the murder of Guino Rinaldo, and surround him at his apartment. As Tony’s mental state breaks down, Cesca shows up to kill Tony to avenge Guino, but she can not bring herself to kill him.

Instead, she decides to help Tony fight off the police in a last stand together. As the police move in to arrest him, a gun battle breaks out, and a bullet hits Cesca; killing her. The police shoot tear gar into the apartment, and Tony flees. At the base of the stairs, he begs for his life just long enough to get the jump on Inspector Ben Guarino, and run past him.

An officer waits outside, and guns Tony down where he dies in a gutter. As he falls to the ground, onlookers run up, and cheer his death. We see one final glimpse of the neon sign above: “The World is Yours!”