Scooby-Doo is the hero of his own story in “SCOOB!,” the first full-length, theatrical animated Scooby-Doo adventure. The film reveals how Scooby and his best friend Shaggy first met each other and became two of the world’s most beloved crime busters. The story takes us back to where it all began, when a young Scooby and Shaggy first meet, and team up with Velma, Daphne, and Fred to launch Mystery Incorporated. Along the way they encounter the famed crime fighting duo Dynomutt and the Blue Falcon as they all take on the evil Dick Dastardly. 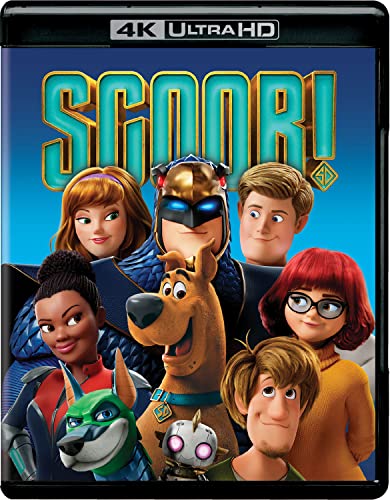 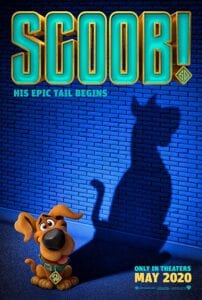 Norville “Shaggy” Rogers (Iain Armitage) is a lonely boy who has no friends. He befriends and adopts a talking stray dog, whom he names Scooby Dooby-Doo (Frank Welker). Scooby is a dog on the run from a police officer for stealing some sandwich meat. Soon after, Shaggy and Scooby meet Fred Jones (Pierce Gagnon), Daphne Blake (Mckenna Grace), and Velma Dinkley (Ariana Greenblatt) on Halloween after some bullies throw Shaggy’s candy into a nearby haunted house. The five some venture into the house together to retrieve the candy and encounter a ghost. However, the four kids and a dog capture and unmask the ghost revealing him to be Mr. Rigby (Tony Cervone), a local thief who responsible for stealing many items from local stores.

Ten years later, Mystery Inc. is exploring going into business with entrepreneur Simon Cowell (Simon Cowell) as their investor. However, Cowell refuses to do business with the group if Shaggy (Will Forte) and Scooby are involved, stating that talent is forefront and friendship is useless. Insulted, Shaggy and Scooby leave the meeting and go to a local bowling alley, where they are attacked by small robots called Rottens. The pair are saved by Dee Dee Skyes (Kiersey Clemons), Dynomutt (Ken Jeong), and the new Blue Falcon (Mark Wahlberg). The new Blue Falcon is Brian, the son of the original Blue Falcon. The heroic trio reveal to Shaggy and Scooby that the Rottens belong to super criminal Dick Dastardly (Jason Isaacs), who wants to capture Scooby as part of a plan involving the three skulls of Cerberus.

Meanwhile, Fred (Zac Efron), Daphne (Amanda Seyfried), and Velma (Gina Rodriguez) discover that Shaggy and Scooby are with Blue Falcon through social media. Dastardly captures them after failing to capture Scooby himself. The trio later escape with the help of a vacuum-headed Rotten and make contact with Dee Dee by hacking into Dynomutt’s on board computer. Velma explains that she and the others are being taken to Messick Mountain, where the last skull is located. Velma ascertains that Dastardly plans to open the gates to the Underworld. Dastardly captures the trio again and explains he wants to rescue Muttley (Billy West), his best dog friend, after he was trapped in the Underworld. Muttley became trapped after he and Dastardly attempted to steal the Underworld’s riches. Dastardly needs Scooby in particular because he is the last descendant of Peritas, Alexander the Great’s dog. Only Scooby can unlock the gates and open the Underworld.

Shortly afterwards, Blue Falcon, Scooby, Dee Dee, and Dynomutt arrive at Messick Mountain and head underground until they reach a hidden Mesozoic island. Shaggy stays on the Falcon Fury after he feels he is rejected by Scooby. The heroic group finds the last skull being guarded by Captain Caveman (Tracy Morgan). Meanwhile, Fred shows up with the Mystery Machine and convinces Shaggy to help him find Scooby in order to save him. At the same time, Captain Caveman explains that they only way that Scooby and Blue Falcon can take the skull is to defeat him in battle. After a short battle, Dynomutt defeats Caveman. Fred and Shaggy arrive, but Fred is revealed to be Dastardly in disguise as he steals the last skull and abducts Scooby. Dastardly’s robots drop the real Fred, Velma, and Daphne into the battle arena and then destroys the Falcon Fury before flying off to Athens. The remaining heroes fight amongst themselves before pulling together to reconstruct the Mystery Machine.

Meanwhile, Dastardly reunites with Muttley in the Underworld, and the evil pair escape with some of the treasure. Blue Falcon hides from the battle and attempts to call his dad to come and save the day. Dynomutt reminds him what it means to be a hero again, and he rejoins the battle. Blue Falcon saves Scooby from being eaten by Cerebus. Shaggy convinces the Rottens to join in the battle. Velma discovers that in order to lock the gate, someone with a close connection to their dog must close it from the other side. The Rottens help the heroes get Cerebus through the gate while Shaggy sacrifices himself to lock the gate from the inside.

However, the gang realize that there is another exit, which Scooby unlocks, and Shaggy is reunited with his friends and Scooby. The Rottens turn on Dastardly and Muttley, who are arrested and taken into custody. Back home at Venice Beach, the gang unveil their new Mystery Inc. headquarters and celebrate with Blue Falcon, Dynomutt, and Dee Dee, who in turn give the gang an upgraded Mystery Machine before the sleuths get called away on another case.

During the credits, the Scooby Gang’s popularity rises. They consult with Dr. Benton Quest, father of Johnny Quest, while Muttley breaks Dastardly out of prison. At the same time, Blue Falcon and Dynomutt form the Falcon Force with new members Captain Caveman, Jabberjaw, Atom Ant, and Grape Ape.