In one of the first adaptations of the classic Charles Dickens’ tale, Sir Seymour Hicks plays Ebenezer Scrooge, a cold-hearted businessman who hates Christmas and looks down upon anyone who celebrates it. However, when the ghost of his former partner appears to him on Christmas Eve and warns him that he may share his fate of damnation unless he changes his ways, Scrooge begins a magical journey through the past, present, and future that will give the miser a new perspective on life and Christmas. 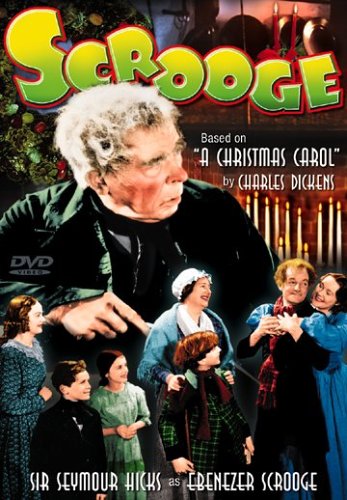 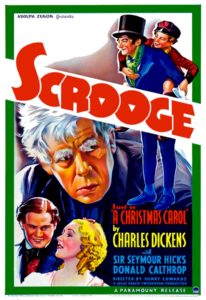 In one of the first adaptations of the classic Charlies Dickens’ tale, Sir Seymour Hicks plays the story’s central character of Ebenezer Scrooge. In 1843 London on Christmas Eve, Scrooge (Sir Seymour Hicks) is a cold-hearted businessman with an incredibly bad temper and tendency to be a skinflint. Scrooge hates Christmas and everything that it stands for and looks down on anyone who celebrates the holiday, including his own nephew Fred (Robert Cochran), his sole living relative. As the film opens, Scrooge rejects his nephew’s invitation to Christmas dinner and lambasts two gentlemen (Charles Carson and Hubert Harben) who are collecting money for charity. Scrooge would rather see the poor placed into the poor houses or graves before he would contribute to help anyone.

Scrooge has a loyal employee by the name of Bob Cratchit (Donald Calthrop) who works alongside Scrooge in the freezing counting house. At the close of business, Bob goes to celebrate the holiday with his family while Scrooge dines alone at a seedy pub while the citizens of London celebrate Christmas all around him.

Later, Scrooge returns to his home, where he lives alone with minimal amenities. Scrooge encounters the ghost of his late business partner Jacob Marley (Claude Rains). Marley warns Scrooge that he needs to repent and except Christmas into his heart or he will be doomed to share his miserable fate in the afterlife. The deceased businessman informs Scrooge that he will be visited by three spirits during the night. However, once Marley leaves, Scrooge convinces himself that he imagined the ghost.

Shortly after midnight, Scrooge is visited by the Spirit of Christmas Past (Marie Ney). The Spirit whisks Scrooge to his past and shows the miser when he lost his fiancée Belle (Mary Glynne), the one love of Scrooge’s life. Scrooge’s unbreakable focus on accumulating wealth drove a wedge between the couple. The Spirit also shows Scrooge’s greedy nature towards others including a debt-ridden couple (Maurice Evans and Mary Lawson), who are barely getting by. Scrooge is also shown Belle marrying another man and having many children. At the conclusion of their journey, Scrooge is returned to his bed chamber.

Soon after, Scrooge is visited by the Spirit of Christmas Present (Oscar Asche). This Spirit shows Scrooge the joys and wonders of Christmas Day. The Spirit takes Scrooge to Bob Cratchit’s house, where Scrooge is surprised to find that his clerk has such a large family. Scrooge watches as the Cratchit family celebrates Christmas with a meager meal made up of goose and pudding. Scrooge takes pity on Bob’s ill son Tiny Tim (Philip Frost). The Spirit warns Scrooge that unless things change, Tiny Tim will die. The Spirit then shows Scrooge how others celebrate Christmas, including his nephew Fred and his wife (Eve Gray) and friends.

Finally, Scrooge is confronted with his final apparition, the Spirit of Christmas Yet to Come (C.V. France). This Spirit shows Scrooge what lies in store the following year. The final Spirit shows Scrooge a group of businessmen discussing the death of an unnamed colleague. The men show no sadness or remorse towards the death. The Spirit also shows Scrooge his charwoman Mrs. Dilber (Athene Seyler) trading several items to a fence that Scrooge recognizes as belonging to him. The Spirit then shows the Cratchit family in mourning, as Tim has died. Finally, the Spirit takes Scrooge to the cemetery and shows him his own grave, revealing to Scrooge that he was the man who died that no one mourned. Overcome with guilt and emotion, Scrooge vows to change his ways and embrace every day as if it was Christmas.

After dining at Fred’s, Scrooge visits the Cratchit household and tells his clerk that he will raise Bob’s wages and give him the entire day of Christmas off. Scrooge promises that he will be a stepfather to Tiny Tim before attending church with the Cratchit family. The film ends with the church congregation singing Hark! The Herald Angels Sing as they enter.