In Seeking a Friend for the End of the World, Dodge Petersen finds himself all alone and heartbroken after his wife dumps him weeks before Earth’s apocalyptic ending. With a massive asteroid about to hit the planet, Dodge makes a mutually beneficial pact with his British next-door neighbor, Penny, who will help him reconnect with his high school sweetheart, as she tries to reunite with her family back in England. Among the chaos and riots, these two desperate travelers find themselves spending their last days alive chasing one final dream. 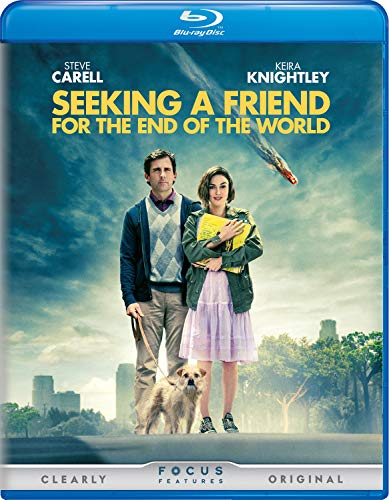 Seeking a Friend for the End of the World [Blu-ray]

‘Seeking a Friend for the End of the World’ Movie Summary 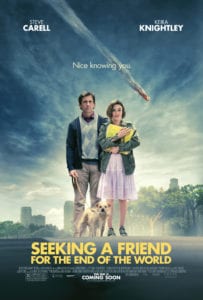 Seeking a Friend for the End of the World begins with a news report which informs the world that a mission to stop an incoming asteroid from hitting the Earth in three weeks has failed. Its impact will wipe out all known life on the planet.

In New York, Dodge Petersen (Steve Carell) and his wife, Linda, listen in on that report from the side of a road. Dodge seems to care less about it, but Linda angrily gets out of the car, and walks away without saying a word.

Back home, as Dodge reminisces about his high school sweetheart, Olivia, he notices his neighbor, Penny (Keira Knightley), crying outside on the fire escape. She just broke up with her boyfriend, Owen, because he caused her to miss her last chance to catch a flight back to England to see her family.

It’s the first time the two have talked for all the years they have lived in the building, and Penny gives Dodge three years of his mail that was incorrectly delivered to her. She also lets it slip that his wife, Linda, is having an affair. That night, Dodge tries to commit suicide with a combination of codeine-laced cough syrup and window cleaner, but it doesn’t work.

He wakes up, confused, the next morning in a park with a dog tied to his foot. There’s a note pinned to his sweater that says, “Sorry!” So, Dodge names it Sorry. He returns to his empty home, and opens up some of his old mail.

One letter is from Olivia that arrived about three months ago. In it, she says Dodge was the love of her life. Depressed, Dodge goes for a walk, but a riot breaks out on his street. He finds Penny with Owen in the middle of melee, and the two leave the self-centered Owen to the rioters.

Dodge knows someone with a plane who can fly Penny to England if she agrees to help him find Olivia first. She does agree, and they head out with Sorry in tow to Dodge’s hometown in Delaware.

They hitch a ride to the suburbs of Camden, New Jersey where Penny’s ex-boyfriend, Speck lives. He’s a preper who’s already ready for the coming apocalypse, and he lets Penny use his satellite phone to call her family. Speck then tries to get Penny to stay with him, but she declines. Speck gives them a car where they finally make it to Delaware, and find Olivia’s family home.

As they walk up to the door, they find nobody home. So, they spend the day together, and learn that they are falling in love with each other. Penny finds a letter from Olivia to her parents which has her return address on it, so they drive to Olivia’s house next. There, Dodge leaves her a letter at the door, and professes to Penny his love for her.

With Penny’s end of the bargain fulfilled, Dodge takes her to the man he said could take Penny to England; Dodge’s own estranged father, Frank. The two men make amends, and later, as Penny sleeps, Dodge puts her into his dad’s plane. He whispers to her that she is the true love of his life, and Frank and Penny fly off to England; leaving Dodge to die alone.

He returns to Penny’s apartment to wait for the impending asteroid impact. However, Penny opens the door; upset that Dodge let her leave. The two lie in bed together as the asteroid makes impact. While Penny says she regrets not meeting Dodge sooner, Dodge replies that their meeting couldn’t have been at a more opportune time.

Focus Features released Seeking a Friend for the End of the World to theaters on June 22, 2012. Lorene Scafaria directs the film which stars Steve Carell, Keira Knightley, and Melanie Lynskey.