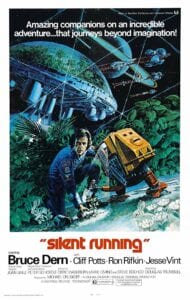 Freeman Lowell (Bruce Dern) is a forest ranger aboard the spaceship, the Valley Forge. There, he tends to some of Earth’s last remaining forests in giant space greenhouses on the ship. Back on Earth, humanity has long since destroyed them, so Lowell is very dedicated to preserving what remains. When orders come back from our planet to destroy the greenhouses, and return to home, Lowell goes rogue. He kills his crew, and looks to save his one remaining greenhouse. Will he succeed?

This is Douglas Trumbull’s first time directing a film. He learned to be a director while working on this film, and had no training or prior experience before filming it. He is mostly know for creating wonderful visual/special effects in movies like 2001: A Space Odyssey, The Andromeda Strain, Close Encounters of the Third Kind, Star Trek: The Motion Picture, and Blade Runner. While nothing is overly spectacular about his directing in this film, his special effect skills more than make up for it.

Bruce Dern is the protagonist, and the film succeeds (or fails) based on his performance as he’s the only human on screen for the most of the movie. His character is a product of the times the film was created; oozing an idealistic flower-child philosophy culminating in his refusal to partake in destroying the only forest remaining. Dern’s performance is subtle and striking here. Although, at times, I did find it a bit hard to empathize with him and his plight. To me, that has more to do with the less than stellar script than his performance.

Cliff Potts, Jesse Vint, and Ron Rifkin are not in the film long enough to have any sizable contribution to the film, but that is not really their fault either. Their characters aren’t developed much more than your typical Redshirt crew member on the Starship Enterprise. They are quite interchangeable, and any actor could have played them.

Douglas Trumbull is the son of Donald Trumbull who created visual effects for the 1939 movie The Wizard of Oz, so he comes from a good pedigree when it comes to special effects. Before this film, Stanley Kubrick hired Trumbull for his 1968 production of 2001: A Space Odyssey, and his experience on that project heavily influenced his making of this film. To keep costs down, Trumbull hired college students for much of the model creation.

Originally, Kubrick wanted his Stargate sequence of 2001 to be about Saturn, but the technology wasn’t good enough to sufficiently create it in his time frame. After Kubrick switched it to Jupiter instead, Trumbull developed that sequence for Silent Running.

While the sets were created on the cheap, the mood, the cluster-phobic atmosphere, and sense of utter isolation throughout are the highlight of this film. Not only do these visuals hold up today, it is the most endearing quality of this film.

The visuals in it have also influenced a great number of filmmakers. Possibly, the most notable comes from the director, George Lucas. After seeing 2001 and Silent Running, he asked Trumbull to work on a little film of his called Star Wars. While he did not, Trumbull gave Lucas his blessing to model his new character named R2-D2 after his drones Huey, Dewey, and Louie, and the rest is history.

Peter Schickele scored the film. The soundtrack of a film is not something that ever really sticks out to me. So if I don’t notice it, that’s a win in my book. This one compliments the visuals, and doesn’t distract me.

Schickele and Diane Lampert did write two songs that Joan Baez sang; Silent Running and Rejoice in the Sun. They are once again, products of their time; very earthy, peaceful, and pretty. While Baez’s style is not high on my list, her performance of them fits this film very well.

I see completely why this film has a cult status. Bruce Dern’s performance and the film’s special effects hold up incredibly well. Its message on preserving the environment is just as important today as it was back then. However, the script is a bit weak; the story line too simple for me. It’s also a bit too slow paced for me at times. I found myself looking at my watch in the middle if it. However, this film is a must see for the classic science fiction fans out there.