A rail passenger George Caldwell finds that a romantic escapade with a sultry secretary puts him in the middle of a Hitchcockian murder plot. Leaping on and off the train, in and out of roomettes, he escapes, only to team up with thief Grover T. Muldoon, who helps him get to Kansas City where they reboard the train together. 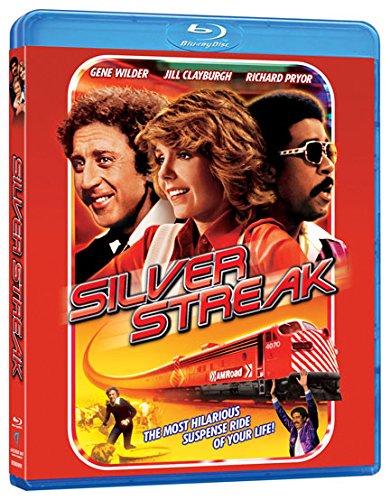 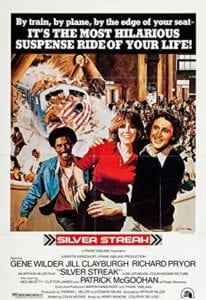 George Caldwell is a book editor traveling from Los Angeles to Chicago for his sister’s wedding on a train called the Silver Streak. There, he meets a vitamin salesman named Bob Sweet and a woman named Hilly Burns. Hilly is a secretary for Professor Schreiner, a reclusive art historian on a publicity tour for his new book on the artist Rembrandt.

After the first night’s dinner, a drunk George and an equally drunk Hilly make out in their combine cabin after opening up the partition that separates their individual cabins. Outside the window of it, George spots a dead man hanging from the roof of the train, which then falls off the train before Hilly sees it. Hilly thinks he imagined it, and then gets back to juggling his balls for the night.

The next morning, George looks at Professor Schreiner’s book (which has an envelope in it), and sees the author’s photo on the book. The person in the photo and the man he saw hanging from the window are one and the same. George goes to the Professor’s cabin to make sure he’s okay, but Schreiner’s killers, Johnson, Whiney, and Reace are there. Whiney has Reace toss him him off the train.

In the middle of nowhere, George ambles down the tracks until he meets a farmer named Rita who flies him to town to meet the sheriff in Albuquerque, NM, but once there, George sees Silver Streak and runs off to catch it. Back on board, George goes to Hilly’s cabin to make sure she’s okay. There, art dealer Roger Devereau apologizes for his chauffeur, Reace, throwing him off the train. The killer Johnson, who is now impersonating the dead professor, arrives and mentions he misplaced the Rembrandt letters.

George is confused, and Johnson quickly excuses himself back to his cabin for some scotch. George heads to the train’s bar, and gets white-girl wasted. Sweet shows up, and a drunk George tells him his story what happened last night. Sweet, knowing that the real professor never drinks, tells George he believes him, and that he’s an FBI agent named Stevens.

Devereau is not an art dealer, but a criminal posing as one, and Whiney, Reace, and Johnson are his evil henchmen. Devereau was afraid the professor would expose him for authenticating two painted forgeries as original Rembrandts. George takes Stevens to the book where he saw the envelope. In that envelope are the Rembrant letters.

As the train goes in a dark tunnel, the killers shoot Stevens in an attempt on George’s life. When Whiney sees George still alive, Reace goes to kill him. He chases George to the roof of the train where it ends when George shoots Reace with a spear gun. As this happens, the train passes an overhanging signal, and it knocks George off the train.

Stranded in the middle of nowhere again, George walks along the tracks until he hitches a ride to the nearby town. He goes to its sheriff who’s busy watching TV. During a commercial, George reports a murder on the train to him.

During George’s story, the sheriff gets an emergency call which corroborates George’s story. However, the inept sheriff doesn’t believe George is innocent, and accuses HIM of killing Stevens.

George steals the sheriff’s nephew’s patrol car, and heads to catch the Silver Streak in Kansas City. The patrol car was transporting petty thief, Grover T. Muldoon, and he helps George break through a police roadblock, and then steal another car to catch the train.

Once in Kansas City, Grover disguises George as a black man in order to sneak past a police stakeout, and re-board the train. However, the killers quickly capture George, and toss him in the Devereau’s cabin with Hilly. Grover disguises himself as a steward, and rescues the two.

After a brief shootout, George and Grover jump off the train when they run out of bullets, but the cops immediately arrest them on the banks of a rive. Back on the train, Devereau promptly burns the Rembrandt letters. The cops then take George and Grover to a station, where federal agent Donaldson explains that he planted the Stevens murder story to protect George. George tells Donaldson about Devereau’s plan, and Donaldson arranges for his men to stop the train.

Once the train has stopped and the crew gets the passengers off it, another shootout ensues between the Feds and Devereau. George boards the train (for the fourth time if you’re counting) with Grover. Devereau climbs into the locomotive, and orders the engineer to start it moving at gunpoint.

An agent shoots Whiney in the leg, and as he tries to climb on the train; Devereau kicks him off. George shoots Johnson dead. Devereau shoots the engineer, and then places a toolbox on the dead man’s switch to keep the engine running. Donaldson then shoots Devereau, who falls. An oncoming train hits him in the head; shredding that master mind into pieces.

With no one alive in the locomotive’s cab, and the pedal to the medal and the thing to the floor, the train rides out of control with no emergency breaks thanks to Devereau’s men.

The train’s only steward with the “Shine” helps George uncouple the passenger cars from the engine. The engine slams into Chicago’s Union Station at full speed, and smashes through the end-of-track barrier into the terminal; destroying everything in its path. The uncoupled passenger cars safely roll into the station where they glide to a stop. In the chaos, Grover steals a yellow sports car, and drives away. George and Hilly leave together to go to the park for a happy ending together.