With the Charlestown Chiefs facing permanent shutdown closure at the end of the season, Pennsylvania’s minor-league ice-hockey team finds themselves stuck in a long losing streak. However, they refuse to throw in the towel. Their very experienced coach, Reggie Dunlop, encourages his newest players, the Hanson Brothers, who specialize in very unsportsmanlike tactics, to goon up the games. While the Brothers put butts in the stands and gets the Chiefs winning again, its star player, Ned Braden, insists on playing fair. In the end, the team must come together if they want to win their championship game against their most feared opponents named the Syracuse Bulldogs! 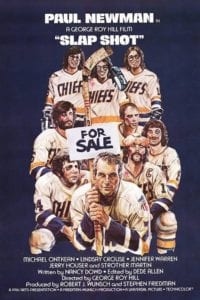 The Charlestown Chiefs is a minor league hockey team in need of an attendance boost for an upcoming game against a team from Hyannisport. Television host Jim Carr interviews Denis Lemieux on “Sports Talk” where they talk the finer points of hockey. Since English is the second language for the French-speaking Canadian, Denis tries his best to describe moves like hooking and slashing to Jim.

The team is dead last in the Federal League with Reggie “Reg” Dunlop as their aging player/coach. The game begins with Reg meeting Hyannisport’s Nick Brophy at center ice to start the game. Nick’s a bit drunk, and he’s annoyed his coach put him in the game.

Over at the broadcast booth, the Chiefs’ Dave Carlson, who’s on the injured reserve from a previous game, reveals that he’s really out due to a cold. Ned Braden is a Princeton grad who plays for the love of the game; not the money. He’s the team’s best player, and he holds the record as the highest-scorer in the Federal League.

Joe McGrath is the team’s manager, and the teams unknown owner is actively encouraging him to come up with publicity stunts to put asses in the seats. Once such stunt is a fashion show using the hockey players, but the Chief’s Johnny Upton hates the idea. He tells McGrath that he’s going to flash the audience so they won’t have to be degraded like this again. Joe ignores his threat, and goes to make a phone call to locate Reg and Ned, who are late to the show. He stops his call short when he hears screams of disgust once Johnny hits the runway.

Meanwhile, Ned and Reg pass the local mill which will soon close forever; laying off 10,000 workers. The Chiefs already have trouble with attendance, but it will be extra hard once most of the town is out of work.

Ned’s wife Lily can’t stand being a hockey wife or the town they are in. Their marriage is in trouble because of it, and Ned now gives more of his attention to their St. Bernard, Ruby, than her.

Joe’s been grooming Reg for a future in the front office, and he has Reg pick up the three new players from the Iron League known as the Hanson Brothers. Reg finds them at the bus station shaking down a vending machine to get their quarter back. Reg takes them to their hotel, but he’s less than impressed with them, and berates Joe for picking up players just because they are cheap acquisitions. Reg refuses to play the brothers as long as he’s coach of the Chiefs.

Reg goes to the bar to meet his ex-wife Francine, with whom he’s still good friends. He then heads to the bus for the next away game. There, Lily tries to give Ned a book with sex scenes highlighted, but he refuses to take it (Reg gets a woody for it though).

For the next game, some Chief’s players worry about Oggie Oglethorpe, their opponent’s craziest player, but he’s been suspended for the night’s game due to poor sportsmanship.

At the hotel before the game, Reg spots the Hansons playing with their racing cars in their room. Those cars are the one thing they love as much as playing hockey. Later, in the locker room, Reg spots the brothers wrapping their knuckles with aluminum foil and tape (which might possibly be considered illegal.

We get an extended sex scene between Reg, Suzanne Hanrahan (the mom from A Christmas Story), and her lovely, lovely breasts. Suzanne’s decided she’s a lesbian after a night of drinking and exploratory sex with another player’s wife. Out on the ice, Reg riles up Tommy Hanrahan, the other team’s goalie and Suzanne’s husband, about her being a dyke. Hanrahan chases after Reg; leaving the goal wide open for the Chiefs to score the winning goal.

Ned calls the team’s win garbage, but Reg looks to fire the team up over it. He slyly cooks up a story to reporter Dickie Dunn where he hints that a Florida retirement community wants to buy the team.

The next day, Reg talks to the players to pump them up. He confides to Dave Carlson about possibly hanging up the skates because he’s too old. Since Dave idolizes Reg, when one of the Broom County player’s suggests suggests that Reg shouldn’t be in the league later that night, Dave goes after him, and takes him out of the game.

Desperate for another win, Reg lets the Hansons in the game. They immediately goon it up; much to the delight of the Chief’s fans. With nothing else to do in town, the fans create a booster club, and begin following the team on their own bus to away games.

At the Peterboro match, the teams start fighting before the game begins, but the officials haven’t shown up to stop the melee. By the time the Chiefs make it back to Hyannisport again, they have a winning recording an exceedingly poor reputation.

Hyannisport townsfolk jeer the team upon arrival, so the team (and their boosters) moon the crowds as the buses pass them. By this time, the entire Chiefs team, except for Ned, goon it up as much as the Hansons; fighting more than playing.

Back at the next Peterboro match, a fan throws something which hits one of the Hansons in the face. All three brothers jump into the stands to fight him, and a large brawl starts with the crowd. After the game, the police arrest the brothers, but the Chiefs won the game which is all that matters.

Once the bus arrives home in Charlestown, Ned is not on it because he decided to get off and walk the last few miles. Angry about that, Lily speeds off in her van, but not before Reg gets in to talk some sense into her. She drops him off at his place, and then speeds off again in tears. Francine later tells Reg she’s moving to Long Island for a job, so she won’t be around much longer.

Reg next goes on Jim Carr’s radio show, and puts a $100 bounty on the head of Syracuse’s Tim McCracken. As Reg tries to get some sleep before the game, Joe calls him screaming for putting a bounty on a player’s head. Lily then shows up at Reg’s place with her dog and belongings in tow; ready to straighten herself out.

Reg finally gets a short nap in the remaining bed space the St. Bernard leaves him. The game that night goes well, but Ned still refuses to play dirty. So, Reg benches him for the first time in his career. With nothing else to do, Ned goes to the broadcast booth, and gripes to Jim Carr about it. Then, discovering Jim wears a toupee, he announces that to the on air listeners too.

Reg finally figures out that the team’s owner is somebody named McCambridge, so he goes to his home to talk with him. When he arrives, he finds the owner is a widow named Anita McCambridge. She plans to fold the team to take a tax write-off even though she agrees she could sell the Chiefs. She chooses not to as she hates the violence in hockey.

Reg tosses a tirade of insults at her, and then leaves disgusted. He then drives to Ned’s house where he find him out in the woods to avoid talking to Reg. Reg tells to Ned play however he wants and, since the team is folding regardless, he’d like to finish in style.

Reg, ever the busy bee, then takes Lily to Francine’s beauty shop for a makeover. She says Lily’s naturally pretty, but could look like Cher with the right makeup.

At the championship game, Reg tells the guys to play old time hockey, and not goon it up for what will most likely be his last game. The Hansons agree, and take the ice to wait for Syracuse to come out. The announcer receives an updated roster for them, and we find Syracuse recruited some “Old Time” goons to play the Chiefs; including McCracken and Oglethorpe.

As soon as the match begins, the Syracuse players start a huge fight with the Chiefs. As usual, Ned doesn’t get involved. Joe angrily sits in frustration because his team doesn’t fight back. During a break, Joe screams at the Chiefs because he’s brought all the major NHL talent scouts to the game to watch them play tough; not act like a bunch of pussies.

Reg tells the boys that old time hockey is over, and to goon it back up. Ned sits on the bench while the two teams fight it out. He spots Francine along with the new and improved Lily in the stands. He gets a boner for his wife’s new look, and skates out to center ice where he begins removing his uniform until he’s wearing nothing but his jockstrap.

This sight stops the players from fighting, and McCracken yells at one of the refs to stop Ned’s disgusting display. He doesn’t interfere with it, so McCracken punches the ref, and Syracuse immediately forfeits the game. The ref hands Reg the winner’s cup, who then passes it to Ned as they skate off the ice to thunderous applause from the Chief’s fans.

The next day, Charlestown throws the team a victory parade. The NHL’s Minnesota Nighthawks hire Reg as their coach, and take many of the Chief’s players with him. Reg spots Francine driving off to Long Island to her new life, and Reg asks her to stay in touch once he moves too.