The beautiful and kindhearted princess Snow White charms every creature in the kingdom except one – her jealous stepmother, the Queen. When the Magic Mirror proclaims Snow White the fairest one of all, she must flee into the forest, where she befriends the lovable seven dwarfs – Doc, Sneezy, Grumpy, Happy, Bashful, Sleepy, and Dopey. But when the Queen tricks Snow White with an enchanted apple, only the magic of true love’s kiss can save her. 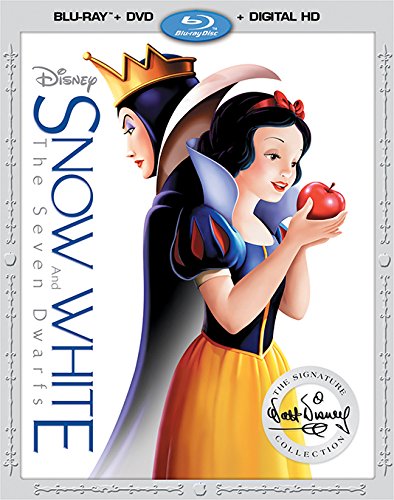 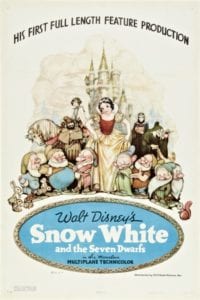 Snow White lives with her evil stepmother who is quite vain. She is afraid that Snow White is even more beautiful than she is, and makes the girl her maid. Every day, the queen asks her mirror who is the fairest one of all. While the mirror always replies that the Queen is, one day it says that Snow White is the fairest one of all. This upsets her tremendously, and she does what any rational woman in her position would do; she orders Snow White into the forest and killed. As proof of her death, the Queen wants Snow White’s heart delivered to her in a box.

Unfortunately for the Queen, the huntsman, tasked to do the job, can’t go through with it. While begging Snow White for forgiveness, he tells her that the Queen wants her dead. She can never return home to the castle. Alone, in the forest, some woodland creatures befriend Snow White. They lead her to the cottage of seven dwarfs: Doc, Grumpy, Happy, Sleepy, Bashful, Sneezy, and Dopey. When they return home from working the mine, they find their cottage all clean. They find Snow White asleep upstairs, and she awakes to find the dwarfs staring at her.

They allow her to stay because she can cook and clean, and all seems well in the forest. That doesn’t last long as the Queen quickly finds out that Snow White is still alive when she asks the mirror again who is the fairest one of all. The huntsman tricked her with the heart of a pig.

If you want something done right, you have to do it yourself!

The Queen whips up a poisoned apple that puts the person who eats it into a cursed coma. The only way to break the spell is from love’s first kiss. The Queen transforms herself into an old hag, and delivers it to Snow White. She tricks Snow White into biting the apple under the ruse that the apple grants wishes. Snow White falls into her magical sleep, and the Queen proclaims herself the most fair in the land.

The dwarfs return to their cottage with the woodland creatures, and chase the Queen to the edge of a cliff. There, they trap her. She begins to summon a boulder to smash her pursuers, but lightening strikes the cliff, and the fairest Queen of them all falls to her death. The dwarfs return home to find Snow White in her coma. They can’t bring themselves to bury her, so they put her in a glass coffin. They and the woodland creatures will keep watch over Snow White.

After a year, a Prince, whom Snow White met previously while alive, learns of her condition. Madly in love with her, he goes to visit her. Thinking she’s dead, he gives her a kiss which, of course, breaks the spell; waking Snow White from her slumber. As the dwarfs and woodland creatures celebrate, the Prince take Snow White away from them to live in his castle, happily ever after.