In this extremely controversial, but Academy Award winning film, young Johnny and his mother are sent to live on his grandmother’s plantation in the deep South some time after the American Civil War while his father remains in Atlanta. Once there, Johnny befriends Uncle Remus, one of the African American men living on the plantation, who helps guide him through life with his colorful stories about Br’er Rabbit, Br’er Fox, and Br’er Bear and their adventures in the woods near the Briar Patch.

‘Song of the South’ Movie Summary 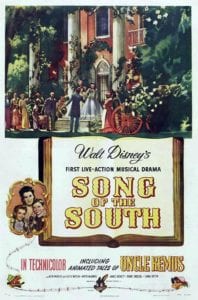 Johnny (Bobby Driscoll), a young child, is traveling with his parents, Sally and John Sr. (Ruth Warrick and Eric Rolf), to his grandmother’s Georgia plantation sometime after the American Civil War. Johnny is excited to see his grandmother (Lucille Watson), but is devastated to find out that his parents have decided to live apart for a while. John Sr. tells Johnny that he will return to Atlanta to continue his job as editor of the city’s newspaper, while Sally will stay with Johnny at the plantation. That night, Johnny secretly sneaks out of the house and leaves for Atlanta with only a small bindle.

While on the road to Atlanta, Johnny overhears the voice of Uncle Remus (James Baskett) telling a group of African American children tales of a character named Br’er Rabbit (Johnny Lee). Remus sees Johnny eavesdropping on the stories but doesn’t confront him. A few moments later, some of the former house slaves inform Remus that Johnny has run away. Remus tells them to go back to the mansion and inform Sally that Johnny will be back soon. Remus then goes and finds Johnny hiding in the bushes. Remus befriends the boy and offers him some food for his journey to Atlanta. Remus takes Johnny back to his cabin where he tells Johnny a story about Br’er Rabbit.

In the story, Br’er Rabbit attempts to run away from home. However, he is captured in a trap left by Br’er Fox (James Baskett) who intends to kill Rabbit and eat him. Dim witted Br’er Bear (Nick Stewart) comes across Rabbit trapped in the rope, and Rabbit convinces Bear to take his place in the trap, frustrating Fox’s plan. Fox informs Bear that he has been tricked, and the two try to catch Rabbit before he gets away. Rabbit evades the two larger animals and runs all the way back to his house in the Briar Patch.

Johnny interprets the moral of the story and agrees to return home with Uncle Remus and Johnny’s friend Toby (Glenn Leedy). Remus attempts to cover for Johnny by telling his mother that Johnny was listening to Remus’ stories about Br’er Rabbit and lost track of time. However, Sally realizes that Johnny was planning on running away when Toby gives her Johnny’s bindle. After Johnny and Sally leave, Remus and Johnny’s grandmother comment to each other that both Johnny and his mother need the presence of Johnny’s father.

The next day, Johnny and Toby are playing on the plantation with Toby’s frog. They encounter a poor white girl named Ginny Favers (Luana Patten) who lives in a nearby shack. Ginny’s older brothers, Jake and Joe (George Nokes and Gene Holland), make fun of Johnny’s fancy clothes. Johnny runs off by himself to a nearby river and rips off his fancy collar. Ginny follows him and gives Johnny her puppy in exchange for Johnny’s frilly collar.

Once back at home, Sally refuses to let Johnny take care of the puppy and orders him to give it back to the Favers. Fearful that Ginny’s brothers will drown the small dog, Johnny takes the puppy to Uncle Remus. Remus agrees to watch the dog for Johnny. A few days later, Jake and Joe try to get the puppy back from Remus, but when Remus and Johnny refuse to turn it over, the two boys vow that they will get the dog back. Remus then tells Johnny and Toby another story about Br’er Rabbit.

In this story, Br’er Rabbit is warned by Remus and Br’er Frog (Roy Glenn) that his care free attitude is going to get him into trouble someday. Meanwhile, Br’er Fox and Br’er Bear make a trap for Rabbit using a scarecrow made from tar and disguised as a fellow animal. Rabbit comes across the trap and becomes angry at the tar baby when it won’t talk to him. Rabbit hits the tar baby and becomes trapped in the tar. Fox and Bear come out of hiding and begin fighting over what they want to do with Rabbit. Fox wants to cook him and eat him. Bear wants to knock his head clean off with his club. Rabbit tells them they can do whatever they want as long as they don’t throw him into the Briar Patch. The reverse psychology works and Fox throws Rabbit into the Briar Patch, allowing the smaller animal to escape the predicament alive. Once safe, Rabbit reveals his ruse to Fox and Bear.

Johnny uses the moral of the story on the Favers brothers. Johnny tries to convince the boys not to tell their mother about the dog, which is what they do. The brothers receive a whipping from their mother (Mary Field) over the incident. The boys figure out the ruse and tell Sally about the dog. Sally becomes upset with her son and Remus, who was unaware that Sally ordered Johnny to take the dog back to the Favers. Sally orders Remus not to tell Johnny anymore stories. She also orders Remus to turn the dog back over to the Favers. Johnny is heartbroken when he learns that puppy is gone, and Remus won’t tell him anymore stories.

A few days later, Johnny’s birthday arrives. Johnny invites Ginny to the party and picks her up to take her. Jake and Joe are jealous of Ginny and push her into a muddy puddle ruining her new dress. Ginny is sad and embarrassed and runs off crying, not wanting to go to the party with a muddy dress. Johnny begins fighting with the boys, but the fight is broken up by Remus. The older man reprimands the brothers while Johnny runs after Ginny. Johnny tries to comfort Ginny with a story about Br’er Rabbit, but his version only makes her sadder. Remus steps in and tells the two children another story about Br’er Rabbit.

In this story, Br’er Rabbit has been captured by Br’er Fox and Br’er Bear. He is tied up in their cave while the two bigger animals prepare to cook him in a fire. As Fox goes to put Rabbit on the fire, Rabbit begins laughing uncontrollably. Fox and Bear stop and ask Rabbit what he is laughing about. Rabbit explains that he is thinking about his laughing place. Bear is curious and wants to see the laughing place, although Fox wants to cook him. Rabbit leads them to a bush with a beehive. Bear charges in and disturbs the hive. Bear becomes angry at Fox for laughing at him and throws the hive at Fox. Fox and Bear begin to fight, which allows Rabbit to escape again.

After the story, Johnny and Ginny run off to find their laughing place. Sally finds them and scolds Johnny for missing his party. Johnny explains that he was listening to another story from Remus. Sally orders Remus to stay completely away from Johnny. Saddened, Remus packs his bag and begins to head for Atlanta. Johnny chases after Remus when he learns of him leaving. Unfortunately, Johnny is attacked by a bull when he cuts across a field. Johnny is seriously injured and hovers between life and death. Johnny’s father returns to the plantation. From his bed, Johnny calls for Remus, and Johnny’s grandmother escorts the older man into the child’s bedroom. Remus retells the Br’er Rabbit Laughing Place story to the injured boy and Johnny miraculously recovers. Johnny’s father promises not to leave again.

A few weeks later, Johnny, Ginny, and Toby are playing and singing while Johnny’s puppy runs alongside them. Remus smiles when he sees the kids but is shocked when Br’er Rabbit suddenly appears with some of the other animated characters from his stories. Remus rushes off to join the group as they all skip away singing into the horizon.