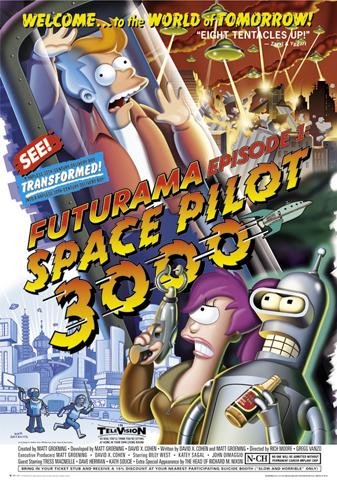 Space Pilot 3000 begins on the night of December 31, 1999. Philip J. Fry (Billy West) is a pizza delivery boy who delivers a pizza to Applied Cryogenics in New York City. However, once there, he finds that the order was just another prank call.

With nothing to live for, he takes a moment in the deserted lab to eat the pizza. As the entire world celebrates the beginning of New Year, Fry sits alone, tilting on a chair. At the stroke of midnight, he loses his balance on it before falling into an open cryonic tube. It immediately activates, and freezes him for the next 1000 years.

He defrosts on Tuesday, December 31, 2999 in what is now New New York City. He immediately meets a purple-haired cyclops named Leela (Katey Sagal) who is a fate assignment officer. The computer she uses on him assigns Fry to a permanent career of delivery boy.

Not happy about another lifetime of deliveries, Fry manages to trick Leela into falling into his old, open cryonic tube as she tries to implant his career chip in his hand. It sets the time for another 1000 years, but Fry feels bad, and switches it to 5 minutes and leaves.

Before he left, Leela also determined that Fry has one living relative named Professor Farnsworth (Billy West). So, Fry decides to track him down while on the run. When he spots a suicide booth, he mistakes it for a phone booth, and decides to call Farnsworth. In line too is a robot named Bender (John DiMaggio), and the two bond over their near death experience inside the booth.

Bender likes his booze, so they next head to a bar for some drinks. There, Bender reveals that he just deserted his job bending girders for use in constructing suicide booths. However, Leela has now thawed from the cryonic tube, and spots the two in the bar. Together, they run off to the Head Museum because it has free admission on Tuesdays. Inside, the meet the preserved heads of historical figures from the 20th century.

Now they find they have to flee both Leela AND some overzealous police. Their only choice is down, and they find an underground tunnel that leads to the ruins of Old New York. After some reminiscing of his old life, Leela catches up to Fry again. However, a strong dose of reality has hit Fry, and he’s now depressed. He fully realizes that everyone that he knew and loved is dead.

Fry tells Leela that he accepts his fate as a delivery boy, and she can put the career chip in his hand. Leela, who’s also alone and hates her job, sympathizes with him. Instead of implanting the chip into Fry, she removes hers. Now, the law considers all three to be job deserters, and they are wanted criminals.

They finally track down Professor Farnsworth, to find he’s the founder of an intergalactic delivery company called Planet Express. Farnsworth helps the three evade the police who have now surrounded his laboratory. They all go inside Farnsworth’s Planet Express Ship, and prepare for takeoff. At the stroke of midnight, they hightail it out of there under the cover of the New Year’s fireworks.

As the year 3000 begins, Farnsworth hires the three as the new crew of his ship. It seems something bad happened to his old crew when he produces their career chips from an envelope that reads, “Contents of Space Wasp’s Stomach.” When Fry asks what his new job is, Farnsworth says that he will be traveling into space as a delivery boy. Surprisingly, Fry is overjoyed at his new job.