Lonestar and his trusty sidekick, Barf, wind up rescuing a princess from the evil clutches of Dark Helmet. He, along with his group of Spaceballs, seeks to rule the universe. After Dark Helmet comes up with a sinister plan to take all the air from planet Druidia, Lonestar finds he has the Schwartz. Along the way, he finds out that he’s a certified prince, and he marries the cute princess after he and Barf save the day. All in Druidia live happily ever after. 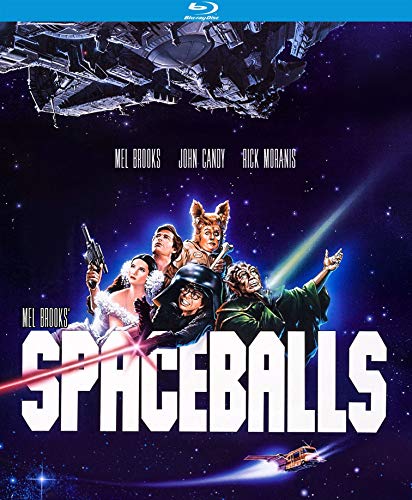 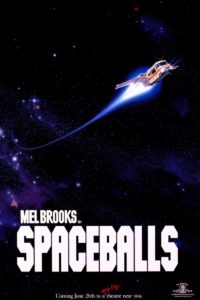 The evil leaders of Planet Spaceball, having foolishly squandered their precious atmosphere, have devised a secret plan to take every breath of air away from their peace-loving neighbor, Planet Druidia. Today is Princess Vespa’s wedding day. Unbeknownst to the princess, but knownst to us, danger lurks in the stars above…

As the opening crawl fades from sight, an extremely large ship thunders across the screen with a bumper sticker on it that reads: “We brake for nobody!” On the ship, a minion informs Lord Dark Helmet (Rick Moranis) they’ve reached Planet Druidia. Additionally, he goes over Dark Helmet’s helmet to inform President Skroob (Mel Brooks) of the news. While this infuriates Lord Helmet, he still orders Colonel Sandurz (George Wyner) to execute their plan to raid Planet Druidia’s atmosphere of its air.

On the Planet Druidia, Princess Vespa (Daphne Zuniga), the daughter of the Druish King Roland (Dick Van Patten), is about marry a guy with a sleeping disorder named Prince Valium (Jim J. Bullock). As she walks down the aisle with her father, she tells him that she doesn’t love the prince and walks out of the ceremony. She and her robotic caretaker named Dot Matrix (Joan Rivers) escape in King Roland’s new Mercedes space cruiser.

In the deep throws of space, a Winnebago cruises along. Its captain, Lone Starr (Bill Pullman), is asleep at the wheel while his co-pilot, Barf (John Candy), stuffs his face. The ruthless mobster, Pizza The Hutt (Dom DeLuise), calls to tell Lone Starr he screwed up the job he was supposed to do for him, and now Lone Starr owes him $1 million spacebucks. He’s to pay Pizza that money… or else.

King Roland also calls Lone Starr and hires him to track down his daughter before the Spaceballs get her. Lone Starr take the job and they locate her Mercedes space cruiser in short order. Spaceball One is there and after Lone Starr rescues the princess, he throws the Winnebago into hyper active mode; making quick tracks to escape Dark Helmet. However, Dark Helmet orders Spaceball One into Ludicrous Speed to catch them. The result action causes them to overshoot the Winnebago by a week and a half.

Unfortunately for Lone Starr, the Winnebago is now out of fuel, and they crash land on Vega’s desert moon. The group decides to travel on foot in order to evade the Spaceballs, but before they head out, Lone Starr and Vespa fight about what she can take with her. Barf pressures them to split before Spaceball One comes back and makes them all dead.

Soon after they set out for parts unknown, they find themselves lost in the desert. That night, Lone Starr and Vespa share moment together, but Dot’s virgin alarm goes off before Lone Starr goes off.

The next day, a group of Jawaesque aliens called Dinks rescue them. They take the everyone to Yogurt’s cave. Yogurt (Mel Brooks) introduces Lone Starr to “the Schwartz”, a supernatural Force-like power. He then tries to get everyone to buy the film’s official merchandise. Lone Starr and Vespa now seem to have romantic feelings for each other, but Vespa can only marry a prince.

Back on Spaceball One, Dark Helmet doubles his efforts to nab Princess Vespa after President Skroob decides to use her as ransom to get Druidia’s air. In order to locate her exact location, Colonel Sandurz uses a new technology called Instant Video to watch the movie. Spaceball One next heads to Vega’s moon. Dark Helmet orders his men to literally comb the desert for them.

Dark Helmet then tricks Vespa into thinking that he’s her father and he captures her. Lone Starr, Barf, and Dot Matrix set out to rescue her and destroy Spaceball One. On their way out, Yogurt gives Lone Starr the Ring Of The Schwartz, as well as a fortune cookie which Yogurt explicitly instructs him to open before eating. Additionally, he hands Lone Starr a can of special liquid schwartz fuel to use when needed.

Lone Starr, Barf, and Dot arrive on Planet Spaceball where they locate Princess Vespa in a remote prison cell. After the make their way past several heavily-armed Spaceballs, they rescue her. They then high tail it to Spaceball One.

After Spaceball One successfully deactivates Planet Druidia’s air shield, Dark Helmet flips a switch which transforms his ship into a giant intergalactic maid with an equally giant vacuum cleaner. Lone Starr, Barf, Vespa, and Dot Matrix arrive as it the maid sucks up all of Druidia’s air. Lone Starr uses the Schwartz to reverse the vacuum, and as it begins blowing the air back onto the planet, Lone Starr flies his ship into the giant maid’s ear.

Lone Starr and his group, along with all the Spaceballs, except for Dark Helmet, Colonel Sandurz, and President Skroob escape the ship in their respective Winnebago and escape pods. The three villains, trapped in the maid’s head, are still in the ship as it explodes. The head crash lands on a nearby Planet of the Apes-style planet, much to the dismay of its inhabitants.

With their enemy defeated, Lone Starr returns Vespa to Druidia so her wedding to Prince Valium can continue. As King Roland walks his daughter down the aisle again, he tells her that Lone Starr didn’t take the money they offered him. He only took enough for gas and food, but he didn’t have to worry about paying back Pizza the Hut anymore after he ate himself to death.

By now, Lone Starr and Barf are in the diner portion of a space gas station while they wait for the Winnebago to fill up. Unfortunately for them, “today’s special” is completely inedible, and our two heroes pay their tab and leave.

Barf is still hungry though, so they break open the fortune cookie that Yogurt gave Lone Starr. Yogurt appears and tells Lone Starr that the medallion he wears on his neck is a royal birth certificate. It certifies Lone Starr as the son of a king and queen, and if they hurry, he can still marry Vespa.

Lone Starr has the Winnebago flip a bitch and head back to Druidia. Just as the Vespa / Valium wedding hits the “speak now or forever hold your peace” portion of the ceremony, Lone Starr interrupts. He tells Vespa that he’s a certified prince and asks her to marry him. She barely thinks about it before kicking Prince Valium to the curb. The two get married. Dot turns off her virgin alarm, and our happy couple flies off in the Winnebago for a happily ever after.