Stagecoach takes place in June of 1880. An eclectic group of settlers boards a stagecoach in Tonto, Arizona Territory. They are all headed to Lordsburg, New Mexico for various reasons. The list of passengers include: the drunken doctor, Doc Boone; Dallas, the prostitute; a gambler named Hatfield; Mrs. Lucy Mallory, the cavalry officer’s wife; a timid whiskey salesman named Mr. Peacock; an embezzling banker named Gatewood; Marshall Wilcox, and his escaped prisoner, the Ringo Kid. As the coach crosses through Geronimo’s Apache-infested land, only the mighty U. S. Cavalry can finally save the day. 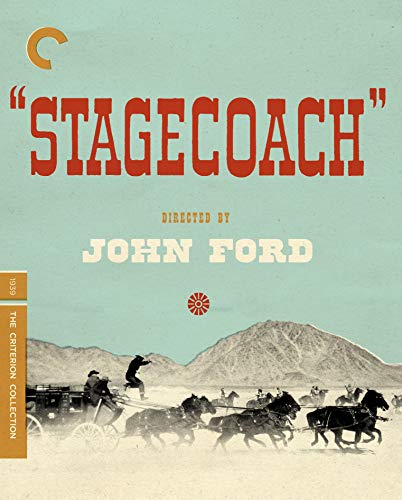 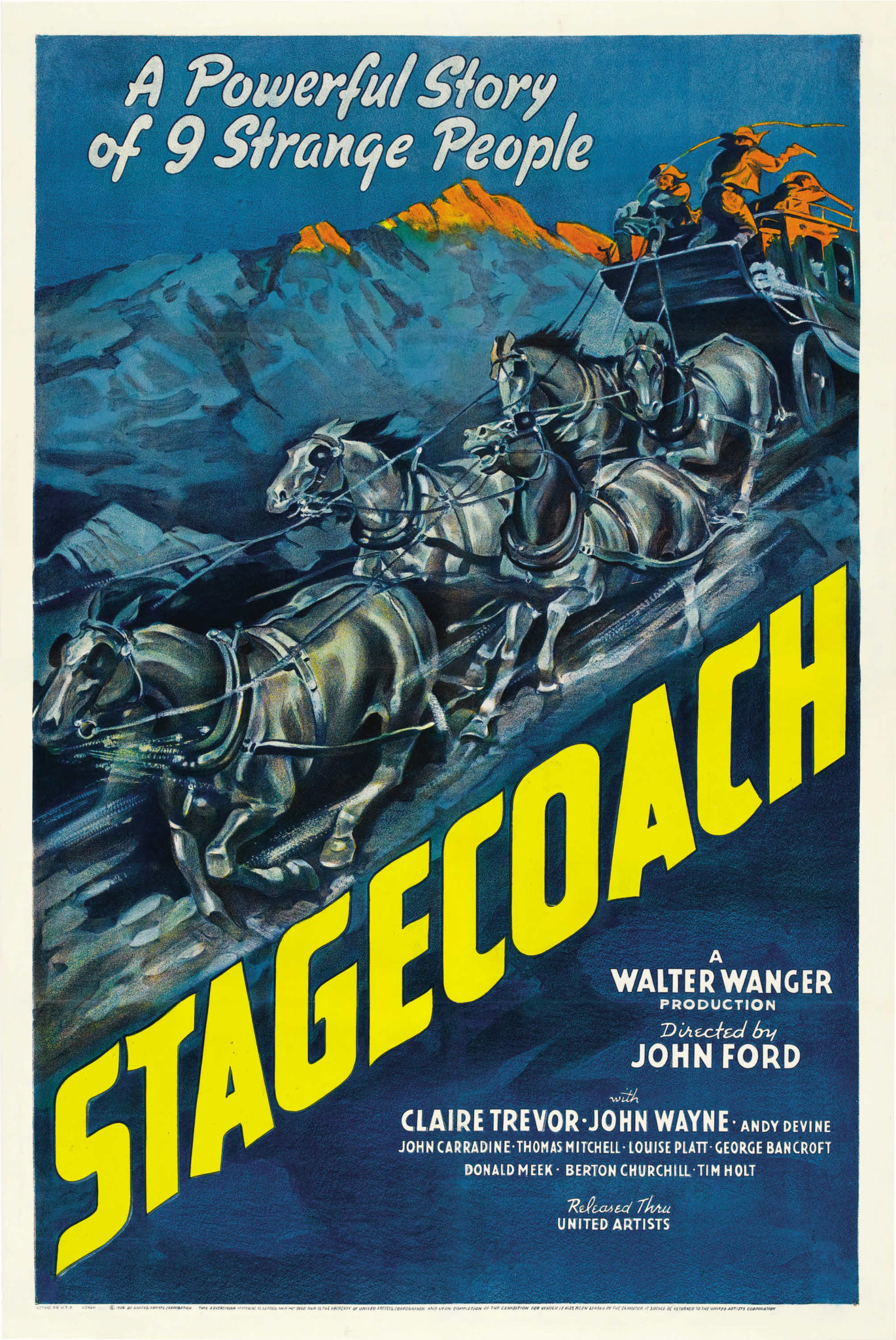 Stagecoach begins in the Tonto, Arizona Territory in June of 1880. There, a group of strangers board a stagecoach to Lordsburg, New Mexico. Dallas (Claire Trevor) is a female prostitute the Law and Order League wants out of town. Doc Boone (Thomas Mitchell) is an alcoholic doctor. Lucy Mallory (Louise Platt) is a pregnant wife on her way to meet up with her cavalry officer husband. Finally, there’s the timid whiskey salesman, Samuel Peacock (Donald Meek), whose samples Doc Boone has a certain fondness for.

The stage driver, Buck (Andy Devine), needs his shotgun guard before heading out. Marshal Curley Wilcox (George Bancroft) tells him that he busy searching for a fugitive named the Ringo Kid (John Wayne). He broke out of prison after learning Luke Plummer (Tom Tyler) murdered his father. Knowing that Ringo is headed for Lordsburg (and that Ringo is looking for revenge) Curley decides to ride along as guard.

As the stage sets out, U.S. Cavalry Lieutenant Blanchard (Tim Holt) shows up to let everyone know that Geronimo and his Apaches are on the warpath. His small troop is headed to Dry Fork, and they will give the stagecoach an escort.

A gambler and Southern gentleman named Hatfield spots Mrs. Mallory in distress at the news. He offers her his protection, and climbs aboard the stage. They aren’t even out of town yet before another man flags them down. He’s the local banker named Henry Gatewood (Berton Churchill), and unbeknownst to them, he’s fleeing the town with money he’s embezzled from its bank.

Shortly after they head out, they come across one more lone man—it’s the Ringo Kid, and he’s now stranded after his horse went lame. Although he’s friends with Curley, Curley has a job to do, and he takes Ringo into custody. Ringo joins the overcrowded coach in cuffs.

Eventually they reach Dry Fork, and the expected cavalry detachment has already moved on to Apache Wells. Buck’s a little spooked, and he wants to turn back. However, most of the party votes to proceed to Lordsburg.

As they eat lunch before continuing on the trek, Ringo surprises the others when he invites Dallas to sit at the main table. Ever the gentleman, Hatfield offers Mrs. Mallory his silver folding cup. No lady should ever have to drink directly from a canteen. When she recognizes the family crest on it, she asks him if he ever made it out to Virginia. Hatfield replies that he served in the Confederate Army under her father’s command.

Finally, they arrive in Apache Wells. Mrs. Mallory is horrified to learn her husband’s been wounded in battle. She faints from the trauma, and goes into labor. That drunk Doc Boone sobers up in time to deliver the baby with Dallas’ assistance.

Later that night, Ringo asks Dallas to marry him and live on a ranch he owns in Mexico. However, she’s quite afraid to reveal her whoring ways, so she doesn’t give him an answer right away. As the next morning dawns, she accepts his proposal. However, she’s not leaving Mrs. Mallory and her new baby just yet. She tells Ringo to go on alone to his ranch, and she will meet him later. Ringo heads out to the ranch, but he stops when he spots smoke signals. He knows an Apache attack is imminent, and returns to Curley’s custody. They all will need help.

When the stage reaches Lee’s Ferry, the find the Apaches’ war party already destroyed it. Curley uncuffs Ringo to help lash logs to the stagecoach so it will float across the river. The danger seems to be behind them, but then the Apaches attack. A long chase ensues, and the invaders manage to injure some of the stagecoach passengers.

All looks looks lost for the party as they run out of ammunition. Hatfield prepares to “save” Mrs Mallory from the indignity of capture, and use his last bullet to kill her. As he’s about to do so, the 6th U.S. Cavalry rides in to save the day.

After all that drama, they finally make it to Lordsburg. The local sheriff is there to arrest Gatewood for embezzlement. Additionally, Mrs. Mallory learns that her husband’s wound is not serious, and he’ll pull through. She thanks Dallas for everything, and Dallas gives her her shawl.

Dallas then turns to Ringo, and begs him not to confront the Plummers. Unfortunately, there’s some things a man just can’t run away from, and he walks Dallas through town before going to see the brothers. On the way, Ringo catches glimpse of Dallas’ brothel, but he’s not phased by it.

Meanwhile, Luke Plummer plays poker in one of the saloons. When he hears of Ringo’s arrival, and orders his brothers to help kill him. It turns into a three-against-one shootout which Ringo manages to survive. He then surrenders to Curley, fully expecting to go back to prison.

As Ringo boards a wagon, Curley invites Dallas to ride with them to the edge of town. She agrees, and as she joins him, Curley and Doc shout into the night air. The noise scares the horses, and they stampede. Ringo “escapes” with Dallas down to the Mexican border and happiness.