On the day of James T. Kirk’s birth, his father dies on his damaged starship in a last stand against a Romulan mining vessel looking for Ambassador Spock, who in this time, has grown on Vulcan disdained by his neighbors for his half-human heritage. 25 years later, James T. Kirk has grown into a young rebellious troublemaker. Challenged by Captain Christopher Pike to realize his potential in Starfleet, he comes to annoy academy instructors like Commander Spock. Suddenly, there is an emergency on Vulcan and the newly-commissioned U.S.S. Enterprise is crewed with promising cadets like Nyota Uhura, Hikaru Sulu, Pavel Chekov and even Kirk himself, thanks to Leonard McCoy’s medical trickery. Together, this crew will have an adventure in the final frontier where the old legend is altered forever as a new version of the legend begins. 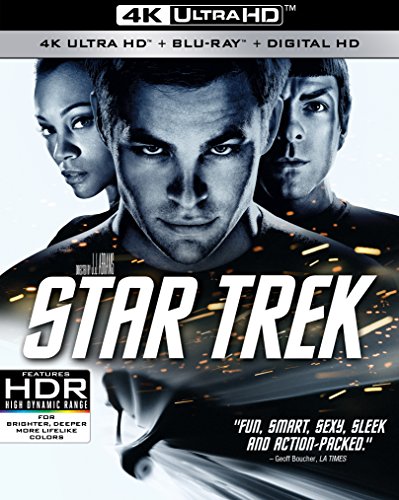 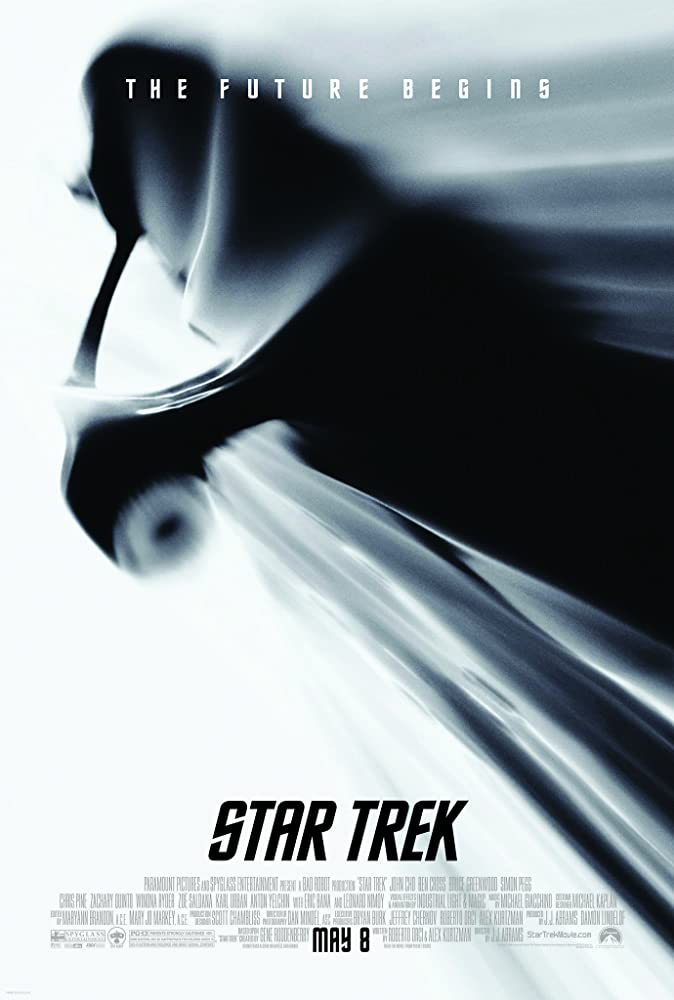 In the 23rd Century, the U.S.S. Kelvin investigates what their sensors indicates is a lighting storm in space. Suddenly, a Romulan ship named the Narada emerges from the storm and viciously attacks the Kelvin. The Romulan ship’s first officer, Ayel (Clifton Collins Jr.), orders the Kelvin’s Captain Richard Robau (Faran Tahir) to come aboard the Narada to negotiate a truce. Robau agrees and leaves his first officer, Commander George Kirk (Chris Hemsworth), in command of the Kelvin. Once on board the Narada, Robau is questioned as to the current stardate and an Ambassador Spock, whom Robau does not know. The commander of the Narada, Nero (Eric Bana), kills Robau and resumes attacking the Kelvin.

Kirk order the ship’s passengers and crew to abandon the ship via escape craft. Kirk’s pregnant wife, Winona (Jennifer Morrison), goes into active labor during the crisis. Kirk plans to join his wife after he sets the Kelvin on a collision course for the Narada. However, the auto pilot malfunctions and Kirk is forced to pilot the ship himself to give enough time for the escape craft to escape. He continues to talk to his wife as she gives birth to their son, James Tiberius Kirk. Kirk crashes the Kelvin into the Narada allowing his wife and new born child to escape.

Years later, a young Spock (Zachary Quinto) is accepted into the Vulcan Science Academy. However, when one of the Academy’s panel members mentions Spock’s disadvantage of having a human mother, Spock announces his intent to join Starfleet instead. Sometime later on Earth, a young James Kirk (Chris Pine) gets into a bar fight with several Starfleet cadets after he tries unsuccessfully to pick up Nyota Uhura (Zoe Saldana). The fight is broken up by Captain Christopher Pike (Bruce Greenwood) who recognizes Kirk’s name. Pike tells Kirk of his admiration for the young man’s father. He challenges Kirk to make something of his life and encourages him to enlist in Starfleet Academy. The next day, Kirk joins Starfleet and befriends Dr. Leonard “Bones” McCoy (Karl Urban).

Three years later, Kirk is taking the Kobayashi Maru simulation, and somehow finds a way to beat the no-win scenario. The designer of the program, Commander Spock, investigates and accuses Kirk of cheating. Kirk admits to changing the program, but his disciplinary hearing is cut short when a distress signal is sent out from Vulcan. The cadets are mobilized due to their proximity to the alien planet. McCoy and Kirk board the U.S.S. Enterprise, Pike’s ship. Kirk overhears someone mention a lighting storm in space around Vulcan, and believes it may be related to the incident where his father was killed. Kirk breaks protocol and tries to convince Pike that the distress signal is a trap.

The Enterprise arrives at Vulcan shortly after the remainder of the fleet. They discover that the other ships in the fleet are already destroyed, and the Narada is drilling into Vulcan’s core. The Narada viciously attacks the Enterprise, forcing Pike to surrender himself, much like Robau. Before leaving the Enterprise, Pike designates Spock as captain and Kirk as first officer. Kirk and Spock formulate a plan to disable the drill before it completes its task. Kirk, Lieutenant Hikaru Sulu (John Cho), and Chief Engineer Olson (Greg Ellis) perform a dangerous space jump onto the drilling platform.

Olson fails to land the jump and dies. Kirk and Sulu successfully reach the platform and disable the drill. Meanwhile, Spock beams to the surface of the planet and attempts to evacuate the high council, his father Sarek (Ben Cross), and his mother Amanda (Winona Ryder). Nero launches a new weapon called red matter into Vulcan’s core. The red matter forms an artificial black hole. Spock is able to save the high council and his father, but loses his mother during transport. The red matter causes Vulcan to implode in on itself, killing millions.

The Narada flies off towards Earth. The Enterprise attempts to make repairs while Spock decides their next course of action. Kirk argues that they should pursue the Narada, where Spock is inclined to try to join the remainder of the fleet. Kirk attempts a half-hearted mutiny, and Spock maroons Kirk on Delta Vega, a frozen planet. Meanwhile, Nero tortures Pike in an attempt to gain access to Earth’s defense codes.

On Delta Vega, Kirk is attacked by a snow creature and is saved by an older Spock (Leonard Nimoy). Old Spock explains that he and Nero are both from 129 years in the future. In that future, Romulus was threatened by a supernova. Spock created the red matter in order to create an artificial black hole that would consume the supernova and save Romulus.

Unfortunately, the supernova exploded earlier than expected and Romulus and its millions of inhabitants were destroyed. Nero’s family was killed, and he sought revenge against Spock for failing to save his world and family. The Narada, a mining ship, attacked Spock’s ship with the red matter. However, the red matter was used and both the Narada and Spock were pulled into the black hole, which sent both ships back in time. Nero stranded Old Spock on Delta Vega so that he could see his home planet destroyed.

Kirk and Old Spock make it to a Starfleet outpost on Delta Vega. They meet Montgomery “Scotty” Scott (Simon Pegg) and his alien assistant, who are the only people stationed on the outpost. Scotty and Old Spock devise a way for Kirk and Scotty to beam onto the Enterprise while it is traveling at warp speed. Once on board the Enterprise, Kirk follows Old Spock’s advice and provokes Young Spock into attacking him, forcing the Vulcan to recognize himself as emotionally compromised. Spock relinquishes command to Kirk, who sets a pursuit course.

Spock speaks with his father Sarek, who helps center him emotionally. Spock returns to the bridge and agrees to help Kirk with his plan. The Enterprise hides itself within the gas clouds of Titan, and Kirk and Spock beam aboard the Narada. Kirk fights with Nero and Ayel. He kills the first officer and rescues Pike from imprisonment. Spock then takes Old Spock’s ship and destroys Narada’s drill. He then leads the Romulan ship away from Earth before setting it on a collision course with Nero’s ship. The Enterprise rejoins the battle and beams Kirk, Spock, and Pike back on board right before the Narada collides with Old Spock’s ship, igniting the red matter. A black hole opens in the middle of the Narada and beings to destroy the ship. Kirk offers to assist Nero, but the Romulan refuses. Kirk and Spock decide to fire on the Narada instead as the ship is consumed by the black hole.