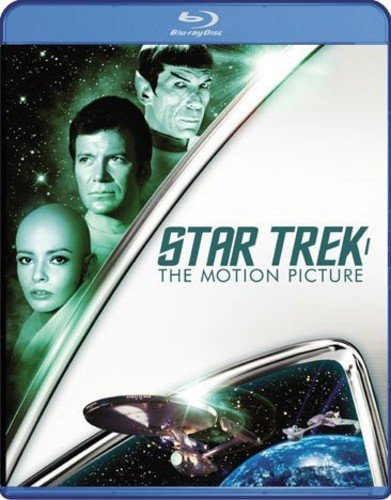 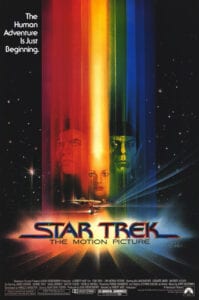 Star Trek: The Motion Picture starts with a giant energy cloud in space destroying everything in its path. Three Klingon Birds of Prey investigate. The cloud blows up two, and the third tries to retreat before they too meet the same fate. Wait, retreat? What the hell kind of Klingons are we dealing with? Qapla, indeed.Meanwhile in Sector 001, the Enterprise is undergoing a major refit.

For years of dedicate service, banging numerous Orion slave girls, Captain Kirk is now admiral. He throws a major hissy fit so he can regain command of the Enterprise to investigate the space cloud coming straight for Earth. Captain Decker, who oversaw the refit and was to take command, gets his space panties in a bunch and doesn’t take the news too well. Hey, at least he still has his relationship with Illia…who is bald…and took a celibacy vow. Ok, I can see why this frustrates Decker.

Kirk addresses the crew in the most motivational way he can: showing the cloud destroying the Klingon ships. You can tell Kirk suppressed doing the jig when he saw the Klingons go the way of his son… wait… that happens later in the timeline. Nevermind. Any who, Kirk says the cloud is heading straight for Earth and they, as per standard Starfleet protocols, is the only ship that can intercept the cloud in time. Because if you are going to build a fleet of starships capable of not only defense, but also for destruction, you want to make sure that none of them are around to protect the home base.

The cloud interrupts the briefing when it attacks a Starfleet station, which Kirk also shows to the crew. The cloud destroys the station, which clearly upsets everyone at the loss of their comrades. Kirk consoles his crew by saying, “pre-launch countdown will commence in forty minutes.” Comforting. And they say that Spock is the emotionless one.

The rest of the cast, I mean crew, assembles, except for Spock who is now a hippie. The Enterprise leaves dock and heads out into space. Kirk fires up the warp engines which creates a wormhole that engulfs the ship. Kirk damn near kills the crew before the cloud can. Only Decker, with clearly much more knowledgeable of the new Enterprise saves the ship and Kirk’s legacy.

Shortly thereafter, Spock joins the crew, helps get the engines working, and the ship speeds off at Warp 7 toward the cloud. Once at the cloud’s edge, the cloud attacks. The shields deflect the first assault, but can’t take another hit. How cliché. Spock figures out how to communicate with the cloud, see… I told you he went hippie, just as the cloud begins a second assault. Spock figures out how to say “hi” in cloud language in just the nick of time.

The cloud opens up faster than Nurse Chapel’s legs after a bottle of wine and the Enterprise thrusts deep inside. The cloud accesses the Enterprise’s database and vaporizes Illia. However, the cloud then makes a probe that looks exactly like the Illia actress. Fortunately, the actress who plays her has a robotic acting method, so it works. V’ger programmed the Illia probe to observe and report the happening of the carbon-based units infesting Enterprise.

Eventually, Spock realizes V’ger is a sentient machine that wants to meet its creator. Once at the center, Kirk, Decker, Spock, and McCoy form a landing party and realize V’ger is really Voyager 6, an Earth deep-space probe from the 20th century. V’ger wants to know if there’s more to life than observe and report.

Decker, realizing this is his chance best chance to bang the bald chick, or at least a real doll version of the bald chick, rewires Voyager to merge with the Illia probe and V’ger. With the merging complete, Enterprise and Earth are safe. Kirk then goes on joy ride with the Enterprise, probably looking for more Orion slave girls.