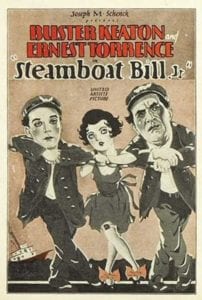 This was the last of Buster Keaton’s “Big 3” movies – “College”, “The General” and “Steamboat Bill, Jr.” In my opinion, all three should be seen to be believed. There never has been, nor will ever be, another actor who did his own death-defying stunts that had such skill as an actor to carry an entire picture by himself. Douglas Fairbanks, Sr. was considered a legend of physical prowess. I’d match Buster up against him any day of the week. Jackie Chan is the closest thing we have today to doing his own death-defying stunt work. But even Jackie would never dream of pulling off the most dangerous work as Buster. To this day, people still marvel at the physicality of the tiny Keaton.

“Steamboat Bill, Jr.” is not the most creative at story-telling. Basically it’s plot device after plot device to move Buster to and from one dangerous stunt to the next more dangerous stunt. How he pulls this off with such ease is still a marvel. And the comedy from “Ol’ Stoneface” is still funny today. The hat-switch scene where Buster and his father go through a series of hats while Buster looks right at the camera as though it is the mirror is comedy brilliance.

In all of Buster’s best comedies, he figures out how to maneuver huge objects through the funniest and most insanely difficult ways possible – trains in “The General”, a crew boat in “College”, and he maneuvers a really large steamboat with only an insanely simple yet complex set of ropes in “Steamboat Bill, Jr.”. Just watch Buster shimmy down FIVE levels of the boat to basically shake hands, only to shimmy BACK UP those same five levels in mere seconds. It is astonishing the athleticism and creativity he could pull off in one single, UNEDITED scene shot with only one camera. Astounding.

The supporting cast is mainly there as foils for Buster’s laughs. However, Marion Byron (a mere 16 at the time of filming) is wonderful as the dainty love interest in this Romeo & Juliet story between feuding river boats. It is decently acted by all involved but this is Buster’s show and everyone knows it.

The ultimate payoff is in the dramatic and DANGEROUS hurricane that hits the tiny town in the finale. There is a reason that ONLY Buster is in all the scenes in the hurricane. Nobody else would be crazy enough to be caught dead in something like that simply for a movie. It’s borderline suicidal actually. They blow up an ENTIRE town right in front of our eyes using six jet engines creating a wind storm so strong Buster could literally lean at a 45-degree angle into the wind and not fall. In several scenes, there is only one take because once the building explodes into a pile of kindling within inches of the real-life Buster they can’t rebuild it. For him to keep a stoneface when the world is physically demolished right in front of him, and he keeps acting in the midst of all that chaos… My mind can’t fathom that kind of bravery from a screen legend.

I can reasonably believe that by today’s standards, the insurance companies would NEVER allow the stunts Buster Keaton pulled off in this story. Simply breathtaking isn’t a strong enough word. DEATH-DEFYING is the only word that can be used for the now-legendary scene of a wall collapsing all around Buster, save for a lone open window that saves Buster from certain death. It is said that half the crew stayed away from the set that day simply because they couldn’t watch Buster die in real-life from that wall in the event Buster was only a couple inches from his mark and the stunt went horribly wrong.

He would have been crushed without a doubt. How many movies have ever done something as dangerous around their major star simply for a scene in a movie? I can say without equivocation – none. Watch and rewind that scene – I promise you won’t believe what you see. The weight of that wall is not break-away kindling. It is a SOLID wall of bricks and mortar weighing at least a few thousand pounds. When it SLAMS into the ground around Buster, you see what damage would have been done to him had it hit him. But as you rewind the tape, watch Buster through the entire sequence in slow-motion. You will see that he NEVER FLINCHES!!! I read that he was having a really bad day in his personal life that day but this is unreasonably suicidal as a scene. It is legendary for a reason. There will never be anything like it again.

Buster made the impossible seem routine. He was just a little feather being brutally tossed all over that town from one dangerous stunt to another. If you can’t see true genius in his timing and physical superiority, you are missing a once-in-a-century entertainer.

Buster Keaton was a national treasure. His “Big 3” movies need to be in the Smithsonian for many millennia. That way, in a thousand years when our society is viewed by that generation, I hope they view Buster’s movies and see what the best of us looked like at one time. He is my favorite silent movie comedian, with Harold Lloyd a distant second and Charlie Chaplin third. But nobody touched Buster. He’s my hero.

As a movie, the story is maybe a 5 for it’s simplicity. As a study of physical comedy and dangerous stunts, this is a 50 out of 10. Thank you, Buster. You are missed.