Mario and Luigi are two ordinary plumbers living in Manhattan who suddenly find themselves on a daring quest to save a princess in Dinohattan. Dinohattan is a city in a world in a parallel universe of sorts where the inhabitants evolved from dinosaurs. King Koopa leads these creatures, and he sends everything from his goombas to thugs to the kitchen sink to stop the brothers from ruining his chances of taking over the human world. 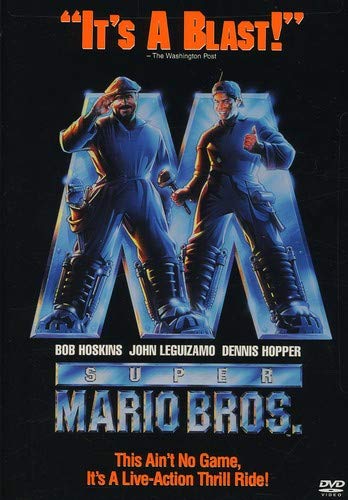 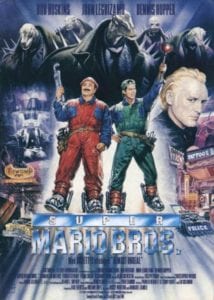 Super Mario Bros. starts about 65 million years ago when a meteorite crashes into the Earth. It kills the dinosaurs, and splits the universe into two parallel dimensions. The surviving dinosaurs cross into this new dimension, and they evolve into a humanoid race.

Time switches to near present day. A mysterious woman leaves a large egg at a Catholic orphanage, but as she attempts to leave King Koopa confronts her. He demands to know where the rock is at. She doesn’t say, and a rock appears from above; crushing the woman to death. The egg then hatches to reveal a baby girl.

A few years pass, and we meet the plumbers Mario and Luigi who live in Brooklyn, New York. They are good plumbers, but Anthony Scapelli’s mafia-controlled Scapelli Construction Company is working on running the brothers out of business.

One day, Luigi meets Daisy, a NYU student digging under the Brooklyn Bridge for dinosaur bones. He falls head over heels in love with the girl, and asks her on a date. They have a wonderful time, and after it, Daisy takes Luigi to the bridge to see the dig. They find two of Scapelli’s men opening up some water pipes; sabotaging the site. Luigi is good plumber, but he’s not that good. He and Daisy head back to Mario to tell him what happened.

They all return back to the site, and the brothers fix the leak. However, Iggy and Spike pop up, and knock the brothers out cold. They then kidnap Daisy for good measure. The boys aren’t out long, and they follow Daisy’s screams deep into the cavern below them. They happen upon an interdimensional portal which takes them to Daisy now located in another world.

You see, Iggy and Spike are King Koopa’s henchmen in this other world. King Koopa is a direct descendent of the Tyrannosaurus Rex, and this world’s obsessive-compulsive dictator. Iggy and Spike forgot to bring Daisy’s meteorite fragment with them that Koopa needs to merge his world with the human world.

We learn that Daisy is the long-lost Princess of the dinosaur dimension, and when Koopa overthrew Daisy’s father years ago, her mother took her to Brooklyn using the interdimensional portal; meaning Daisy was the baby in the egg at the beginning of the film.

The portal was closed for good once they killed Daisy’s mother. However, Scapelli’s men accidentally reopened the portal when they blasted the cave. Once Koopa learned the portal was open, he sent Spike and Iggy to find Daisy and the rock. Merging the worlds would, in his mind, make him the dictator of both worlds.

Unfortunately for Koopa, he increases Spike and Iggy’s intelligence through one of his experiments. The two become smart enough to realize Koopa is true evil, and they end up helping the Mario Bros.

Once Koopa takes Daisy to Koopa-Tower, she meets a young Yoshi, and Koopa informs her that her descendants are dinosaurs. She alone has the power to merge the two worlds into one due to her royal lineage.

The Mario Bros. arrive at the tower where they rescue Daisy with the help of Toad, a good-natured guitarist who Koopa punished for his protest music.

Eventually, the two worlds do merge into one, and Koopa devolves Scapelli into a chimpanzee. Then he turns his attention to Mario, but Luigi and Daisy remove the fragment from the meteorite, and the worlds separate again.

Back in Dinohattan, Mario takes on Koopa. He manages to defeat him when he and Luigi fire their devolution guns at Koopa and blast him with a Bob-omb. Koopa transforms into a semi-humanoid Tyrannosaurus Rex. He attempts to kill the Mario Bros. one last time. They then transform Koopa into an actual Tyrannosaurus Rex, but this final transformation is too powerful, and he bursts into primeval slime.

The group restores Daisy’s father to his old form where he reclaims control over the kingdom. The citizens celebrate, and tear down anything related to Koopa. Luigi professes his love for Daisy, and asks her to come back to Brooklyn with him. Unfortunately, she will not until the damage Koopa caused is repaired…and for some reason, she now wants to spend more time with her father she never knew too.

Luigi is of course heartbroken. He gives Daisy a kiss goodbye, and then returns home with Mario to Brooklyn. Three weeks later, as the Mario Bros. get ready for dinner, Daisy arrives and asks the Mario Bros. for help. She says, “You’re never gonna believe this!” as the film ends.