In this irresistible musical, the legendary dancing duo Fred Astaire and Ginger Rogers are at the pinnacle of their art as a feckless gambler and the shrewd dancing instructor in whom he more than meets his match. Director George Stevens laces their romance with humor and clears the floor for the movie’s showstopping dance scenes, in which Astaire and Rogers take seemingly effortless flight in a virtuosic fusion of ballroom and tap styles. Buoyed by beloved songs by Dorothy Fields and Jerome Kern—including the Oscar-winning classic “The Way You Look Tonight”—Swing Time is an exuberant celebration of its stars’ chemistry, grace, and sheer joy in the act of performance. (Courtesy Criterion.com) 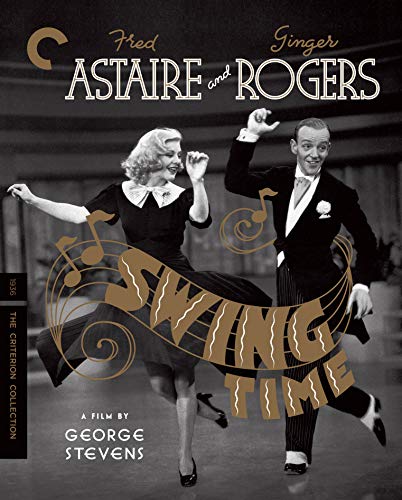 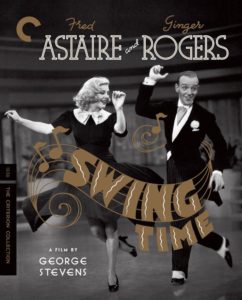 In Swing Time, John “Lucky” Garnett (Fred Astaire) is a gambler / dancer engaged to small town girl named Margaret Watson (Betty Furness). After he performs one last dance number with the boys, Lucky prepares to head over to his wedding, but the other members of his troupe have other plans. They are going to get this wedding called off at any cost.

The boys convince Lucky his striped trousers need cuffs so Lucky has Edwin “Pop” Cardetti (Victor Moore) take them to be altered. While they wait, the boys strike up a friendly game of craps with Lucky. However, the tailor (Abe Reynolds) Pop visits refuses to alter the pants because cuffs on striped trousers is a fashion faux pas and he wants nothing to do with it. Eventually, Pop returns to Lucky with unaltered pants and Lucky heads out as is, but $200 richer from the winnings he took from the boys.

Meanwhile, Margaret’s father, Judge Watson (Landers Stevens), loses his patience and calls off the wedding before telling all the wedding guests to go home. By the time Lucky arrives, he’s in the dog house, but he’s able to schmooze the Judge by saying he was delayed because he was “earning” $200. This pleases Watson and he tells Lucky he may still marry his daughter if he earns $25,000 to prove how good a business man he is.

Lucky decides to take a train to New York city to win the dough, but as he goes to purchase a ticket, the boys show up to claim their bet of $200. You see, one of the boys bet Lucky finally left to go to the Watsons that he wouldn’t get married and well, he didn’t. The boys took all his money except for his lucky quarter. This doesn’t deter Lucky though and he hops a freight train (still in his wedding suit) to the Big Apple. Pop, not wanting to be left behind, jumps on the train with him.

They arrive in New York with no money, no smokes, and no place to live. That’s when Lucky meets a girl named Penny (Ginger Rogers) on the street. He asks for change for his lucky quarter so he can buy cigarettes for Pop and she obliges. The cigarette machine takes his money so Lucky hits it which causes the machine to pop out a bunch of coins and cigarette packs. Lucky then catches up to Penny to buy back his lucky quarter.

At this point, Penny is annoyed with Lucky and she does her best to ignore him, but she winds up dropping her packages in the crosswalk. As Lucky helps her pick up the packages, Pop steals the quarter out of her purse right before he hands it to Lucky. As Lucky gives her back her purse, she sees she’s missing her quarter and calls a cop out on patrol. He shoos Penny off because Lucky looks like a rich socialite and rich socialites must be protected at all costs!

Lucky is now smitten with the girl and wants to make amends. He follows her to a dance school where she works. Luckily for Lucky, the school offers one free lesson with one of their instructors, and he takes this opportunity to dance with Penny and try to apologize to her.

However, Penny is having none of that. She loses her patience with him as he pretends to not know how to dance to extend his lesson. When she tells him he will never learn to dance, that catches the attention of her boss, Mr. Gordon (Eric Blore), and he fires her on the spot. He then fires his school secretary, Mabel Anderson (Helen Broderick), because she’s chastising Pop for eating her sandwich while he waits for Lucky in the lobby.

Lucky schmoozes Mr. Gordon by dancing with Penny to prove to him how much she actually taught her. Of course the dance number is outstanding and Gordon excitedly rehires Penny and sets up an audition for the two with the owner of the Silver Sandal nightclub and casino. Mable is still fired.

Lucky and Pop con themselves into a room at the same hotel as where Penny and Mabel live, but Lucky is in a predicament. He needs a tuxedo for the night’s audition but has no money. Pop finds a drunk who not only likes to gamble but is wearing the same size 36 tuxedo as what Lucky needs and the two play a game of strip piquet for the outfit… Lucky loses his pants!

Now with barely any cloths at all, the two can’t go to the audition and Penny is mad at Lucky again. He and Pop picket in front of Penny’s apartment door until Mabel talks some sense into Penny and she forgives him. The two get a second chance at the audition.

At the Silver Sandal, we meet bandleader Ricardo “Ricky” Romero (Georges Metaxa), and Lucky immediately takes a disliking to him. When he learns that Romero wants to marry Penny, but she’s been refusing, Lucky likes him even less. Then, Romero refuses to let his band play for the duo and Lucky likes him even less than he previously did. To make matters worse, Silver Sandal’s owner lost Romero’s contract gambling with a rival casino owner so no dance audition.

Pop and Lucky head to the casino to win Romero’s contract back, and as Lucky plays Roulette, he wins nearly enough to marry Margaret back in Smallsville. Lucky stops immediately which brings the club owner, Dice Raymond (John Harrington), over to meet him. The two wager a friendly bet cutting cards—Lucky’s winnings for Romero’s contract. Pop realizes Raymond is cheating with the cards and asks to draw the card for Lucky. Raymond agrees and Pop uses sleight of hand from his magic days to pull the Ace of Spades. Lucky wins the contract.

Lucky and Penny are now official dance partners, but Lucky doesn’t want to be alone with her because the two are clearly in love, and there’s that little issue with Margaret, marriage, and $25,000. However, Mabel is looking to push the two closer together and she makes Pop help her arrange a trip to the country.

Once there she and Pop leave the lovebirds alone, but Lucky has instructed Pop not to leave them alone. As Penny warms Lucky up to their first kiss, Pop cools him off with a snowball to the head. Then Pop manages to let it slip to Penny that Lucky is engaged to another woman, and the magic is gone. Penny demands to go home.

Back at the newly remodeled Silver Sandal, Mabel dares Penny to kiss Lucky before the big debut of their dance number. Not wanting to seem like she’s afraid, Penny goes to Lucky’s dressing room and they share a kiss behind a door.

We cut to the dance floor where the band is playing for the assembled guests, patrons, and fellow con artists… one of whom is Raymond. He and his boys sit with Pop who lets is slip that he conned Raymond with his card trick and Raymond now wants a word with Lucky. Also in attendance is Margaret who desperately needs word with Lucky. Also also in attendance is Lucky’s old dance group who seems bitter he’s moved on without them—no word on if they’d like a word with him.

Backstage after Lucky’s big blackface dance number, everyone comes to claim their word. Margaret shows up first, forcing Lucky to hide in his dressing room closet. Then Raymond arrives with his goons and Pop in tow before shooing Margaret away. Lucky starts to thank Raymond for getting rid of Margaret, but Raymond doesn’t want to hear it. He forces Lucky to cut cards and Lucky loses Romero’s contract. Then Penny shows up and Lucky tells her who Margaret is and he loses Penny too. She leaves and then agrees to marry Romero when he asks her for the umpteenth time.

The next day, Lucky pays Margaret a visit to break off their engagement, but she interrupts him to call it off first because she has agreed to marry another man. Lucky is elated and the two share a good laugh. Then Pop and Mabel show up and as the four have a good laugh over the hilarity of it all, Pop lets it slip that Penny is marrying Romero that afternoon. Lucky is horrified which Mabel thinks is even more hilarious.

The three rush to where the ceremony will take place and Pop and Lucky pull our infamous striped trouser gag on Romero to stall. While this goes on, Mabel finds Penny in on a couch next to where the ceremony is going to take place and laughs at her. Then Pop and Lucky arrive and the group laughs at Romero when he shows up holding up a pair of extremely large pants because Pop has stolen his wedding trousers instead of getting them altered.

As the four laugh at Romero and the situation as a whole, Penny realizes whom she really loves and calls off the wedding to live happily ever after with Lucky.