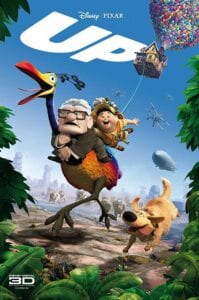 2009’s Up is full of symbolism and hidden meanings. Here’s a few we have found. What have we missed?

The Grape soda pin represented a promise from Ellie to Carl that would last a lifetime. It not only symbolized bravery and camaraderie, but it represented hope, promises yet to come, and most of all love from one person to another.

Russell’s badges represented his only real relationship with his biological father. If you notice he had every badge but one when all the other boys had a small handful only. Russell was overachieving as his only way of having any quality time with his dad when his dad clearly had other things to do besides spend time with his son.

The balloons that Carl sold symbolized joy and laughter during his lifetime with Ellie. They also ultimately led to his freedom when his house flew away using them as his means of escaping death at an old folks’ home.

The house symbolized Carl’s attachment to Ellie in a tangible way when she was gone. He was tied to her memories in everything within that house. When something broke, scraped or burned on the house and mailbox, Carl would defend it like the house was Ellie herself, to the point of violence. When he watched the house float down out of sight at the end, he realized the symbol of Ellie as the house would never actually be Ellie in his memories so watching it fade into the fog was his final goodbye to his past with her.

Ellie’s album had hidden meanings in all her pictures beyond the page Carl would always stop at. It took Carl’s tragedy at giving up before he pushed past that page and moved onto a new chapter which is what Ellie wanted all along.

Kevin represented the ultimate prize for Muntz that he could use to prove how smart he was and how wrong the entire world was for thinking he was crazy. Carl only saw a stupid bird that was a roadblock to his ultimate goal of planting Ellie’s house at the Falls. Russell only saw Kevin as a great pet and a mother to her lost babies.

Dug symbolized innocence and virtue in a vicious world run by Muntz as his master and all the other talking dogs in the blimp. Dug was content doing the dirty work as long as he was allowed to be part of the gang when the gang just saw him as a joke. Dug’s bravery at the end to save Carl, Russell and Kevin proved how strong Dug was when he stopped worrying about being liked and more about doing the right thing.