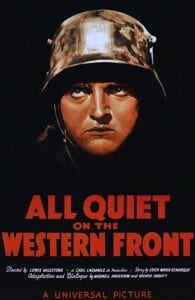 In All Quiet on the Western Front, the entire movie symbolizes the tragic loss of youth at times of struggle. The world war was called “The Great War” because it was the first to involve nearly all corners of the globe. The class of young boys one by one drop by the wayside as their carefree individualism is stripped from them and replaced by battle-hardened soldiers with one design.

Kat symbolizes the folly of invincibility. He is constantly going where nobody else will to get food, weapons, liquor, whatever the lads need. He never gives danger a second glance. Even when a lone plane is flying slowly overhead, he thinks he can’t be hurt.

The boots that kept trading hands symbolizes how beautiful and shiny maybe comfortable while wearing them but they do not guarantee safety, experience or wisdom. They cannot fire a bullet. They cannot stab like a bayonet. They cannot protect your head from shrapnel. They keep your feet dry. But when a bullet or bomb goes off nearby, they do nothing to protect you.

The French women symbolize the unattainable until they are bought for one night for the price of a loaf of bread and a bottle of cognac. How cheaply we give up our virtues and morals at times of war, desperation and destitution.

The hospital stay symbolized everything a soldier dreads. They all want to die on the battlefield or go home safely. Nobody wants to die alone in a hospital bed being ignored and forgotten by medical staff. Paul’s screams about being taken away to die was his way of fighting back against sure death. The signs over their beds signified the hospital staff’s loss of hope or desire to heal when on death’s doorstep. Paul returning from the death room symbolized the desire to overcome death to fight another day.

The butterfly symbolized Paul’s innocence and freedom in youth. How even in the bleakest of moments in his life, he could remember a more serene, peaceful existence when all was right with the world. His sudden death in the same sequence symbolizes how quickly our hopes and dreams can tragically come to an end if we are not aware of the dangers at every turn, especially when we have resigned ourselves to our current existence or when we least expect it.

The Top 15 Greatest Films of the Silent Era

The Top 15 Greatest Films of the Silent Era