Travis Bickle is a depressed former U.S. Marine who suffers from insomnia living as a lone wolf in the Big Apple. To make money, he spends his time trolling its mean and seedy streets in his yellow cab at night. A nobody among nobodies, his mental state declines and his perception of reality becomes warped. He falls deeper and deeper into a world of his own; one full of obsession and vitriolic revulsion. Once many women he finds attractive reject him, the trashy fares he take become too trashy, and he co-workers find fault with him; Travis decides to clean up his filthy city. He buys guns—lots of them, and they will be his messengers of truth. You just better not be caught talking to him! 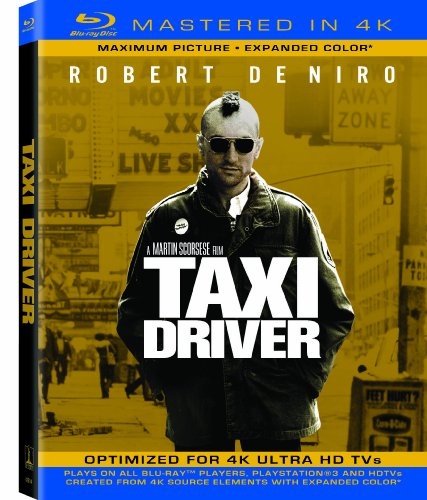 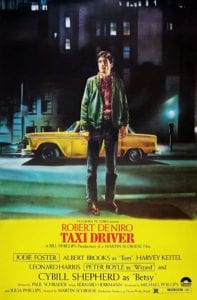 As any red-blooded American male would do, Travis barges into Betsy’s work, and berates her in a desperate attempt to win her back. This only serves to get Travis axed from the office.

Travis has had a lot of trouble with the scum, low lives, and prostitutes dirtying up New York City, and his thoughts of cleaning up the Big Apple become more violent by the day. His horrific experience with Betsy has only served to flame those thoughts.

One fateful night, Martin Scorsese hails Travis’ cab, and he makes Travis watch his wife cheat on him in a bedroom window above them. The Big Scorsese tells Travis his plan to kill his wife and lover for cheating on him. This inspires Travis to act on his aggression, and he buys a number of big guns, and then modifies them for his personal killing needs. The first target of Travis’ rage will be Senator Palantine; the very man Betsy is helping get elected for President of the United States.

On Travis’ first big night out on the town with his new guns, he kills a young man who is robbing the convenience store he’s shopping in. Another night, Travis meets a sweet 12-year-old prostitute named Iris. Travis makes it his mission to kill her pimp named Sport, and set Iris free.

The day Travis is set to kill the senator, the Secret Service spot his very inconspicuous mohawk, and chase after him. Travis escapes, only to decide now is the time to kill Iris’ pimps. Travis kills them all as Iris watches in horror. After being shot a few times as well, Travis tries to kill himself, but he’s out of ammo. The cops come in with guns blazing, and Travis is saved.

Sometime later, Travis has recovered from his gunshot wounds, and is a hero for rescuing a young girl from her pimps. Iris is returned to her abusive family, and forced back into school. Travis is back to being normal, and driving his cab. On his last shift of the film, Betsy gets into his cab, and asks to be taken to her house. When they arrive, Travis won’t let her pay. Knowing Betsy’s home address is payment enough.

Is Travis still psychotic? We don’t really know, but when he looks into his rearview mirror, driving away from Betsy, he suddenly becomes agitated. Is it the fleeting sight of Betsy, or is it the sight of himself? It could all just be the last dream of a crazy man dying on a sofa after a gunfight with a gang of criminals. Martin Scorsese could tell us, but he’s still too busy getting up the nerve to kill his own cheating wife.