Dawn is a high school girl who grew up in the shadow of a nuclear power plant. During an evolution lesson in her biology class, Dawn realizes she may have a special evolutionary trait of her own. However, she can not tell her mother, step-father, or asshole step-brother. They just don’t get her. Additionally, Dawn has a crush on a boy named Tobey, and he thinks she’s swell too. Oddly (or not) the two have taken a pledge to remain chaste until marriage. The two court in groups, watch G-rated films, don’t kiss… and never feed after midnight! Dawn has an orbiter named Ryan, and when things get crazy between her and Tobey, she turns to Ryan for help. However, this evolutionary trait she’s got is taking a huge chunk of fun out of everyone’s lives, which isn’t nice! 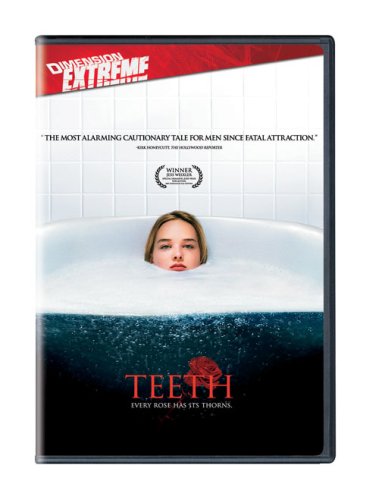 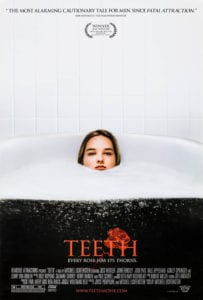 In 2007’s Teeth, teenager Dawn O’Keefe is a spokesperson for the Promise — a Christian abstinence group. At one meeting, Dawn meets Tobey. While she thinks he is very attractive, Tobey is there to speak about purity rings the group’s members wear.

Dawn daydreams about marrying Tobey, and while he finds her attractive too, they can not spend anytime together due to their promise. However, teenage lust gets in the way, and the two meet at a local swimming hole. The water is chilly, so they go in a cave to warm up, and start making out.

Dawn becomes a bit uncomfortable from it, and wants to leave. Tobey is really getting into it, and becomes more assertive. Dawn pushes him away with her purity ring, but Tobey will have none of that stupid talk. He shakes her violently, and smacks her to the ground. While she’s in a daze, Tobey rapes Dawn.

Dawn fights him, and somehow bites off his penis using her vagina…let me say that again, she bites his penis off with her vagina! Confused and horrified at what has just taken place, Dawn runs away. Later, after a Promise meeting, Dawn meets up with Ryan at a dance. They talk a bit before he takes her home.

Still uneasy over her rape, Dawn goes back to the scene, and screams when she sees a small crab crawling on Tobey’s penis…he didn’t even take it with him when he left. Now an unclean woman, Dawn takes her purity ring, and tosses it off a cliff.

She goes home to do some research, and comes to the conclusion that she has vagina dentata. The next day, she goes to a periodontal gynecologist named Dr. Godfrey for answers. The good doctor takes the opportunity to sexually assault her during the examination when he decides not to use a glove. Dawn panics, and bites off four of his fingers.

On her bike ride home, Dawn spots the police with Tobey’s car, but no Tobey. She goes back to the pool where the attack occurred, and looks on as the police pull Tobey’s dead body out of the water…he must have died from exposure.

The next morning, they have sex one more time, but in the middle of it, Ryan’s friend calls him. Ryan takes the opportunity to brag that he won their bet on who would bang Dawn first. This angers her, and her gal-pal teeth bite off the end of his penis.

Dawn’s mother soon dies in the hospital which leads to Dawn’s stepfather, Bill, attempting to toss Brad out of the house. Brad sics his mean old dog on poor Bill. At the hospital to visit Bill, Melanie tells Dawn how Brad told her to ignore Kim’s cries for help. Dawn is enraged, and sets out to fix Brad once and for all.

Dawn makes herself all pretty and seduces Brad. In the middle of sex, Brad tells her of the time when they were kids playing in a little pool. Somehow, Dawn bit him, but she didn’t use her mouth. Just as Brad puts two and two together, Dawn bites off Brad’s penis. It flops to the ground where his mean dog gobbles it up like a Vienna sausage. Dawn leaves him for dead.

With no family left, Dawn rides off on her bike, but she pops a tire along the way. She hitchhikes, and a kindly old man picks her up. They drive for a few hours and Dawn falls asleep, when she wakes, it’s night out, and she tries to get out of the car. The old man locks the door, and gives her a wink; wanting some sort of sexual favor for his help. Dawn looks at the camera as the old guy throws her a sexy smile.

User Rating: Be the first one !
May 9, 2019
4 minutes read
Show More
Back to top button
Close
Close