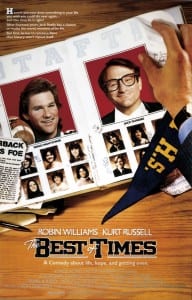 “The Best of Times” is a comedy worthy of your time.

Underrated movie with a host of famous and near-famous actors/actresses playing “everyman” roles. Football, memories, mud and Robin Williams. OMG!!! This is one of those gems I watch every few years just because it makes me happy. Who hasn’t had those moments of “What might have been…?” Ron Shelton’s clever, funny and emotional screenplay was brought to life with a talented cast — yet it failed at the box office.

Of course it was competing at the theaters in 1986 when “Top Gun”, “Crocodile Dundee”, “Stand By Me”, “Ferris Bueller”, “Platoon”, “Peggy Sue Got Married”… and other such classics were trouncing any other good movies. It didn’t stand a chance – and has since been forgotten it seems. What a shame. This is a quality movie.

Quick plot: Robin Williams is a high school nerd who dropped the pass that cost the tiny town their destiny win against their biggest rival. He can’t forget it — and neither can anyone else in town. Due to the loss, Robin and the town “quietly faded into lethargy” as he so eloquently states in the opening moments of the film.

Ten years later, Robin has an epiphany to replay “the big game” with ALL the old players – from both teams – in hopes of overcoming the depression and pudgy pre-middle-age everyone in the town have seemingly slipped into over these many years. What transpires are the hits (and hilarious misses) of putting those lovable losers back together as a team and maybe reviving the dying town – and their marriages and friendships in the process.

This is an excellent, very funny story about a brave little town forgotten by everyone except the eccentric inhabitants who can’t forget the most bitter of endings at the stone hands of a “never-was”. Robin Williams is perfect as the pompous-yet-lovable nerdy banker whose inner demons are the catalyst for such a classic re-imagining of their most famous game. Kurt Russell was breaking out of his Disneyesque golden boy image at the time of this movie (remember “Escape from New York”?), so his out-of-shape ex-All-World high school quarterback who has nothing but fading memories of his glory years persona is spot-on.

Williams and Russell are comedic gold in this story. Add in all kinds of quirky, character actors and actresses filling the town and teams with an enjoyable experience of football in the mud and attempting to change one’s destiny when everyone else has given up on you. I’m thankful to have seen this over and over again. It’s just that much fun. 🙂

Re-watch this movie. It will be special again. And if you’ve never had an opportunity to watch it before, I envy you. This is funny, nostalgic, intelligent, athletic, and has just a touch of emotional journey that will not only put a smile on your face, but possibly a tear in your eye at the end. I. Love. This. Movie. 8 out of 10.

A small-town loser determines to have one more shot at the big time by winning a football game.