Two groups of cattle rustlers, Sam Crew and his gang, and Sonora Joe and his men are a new herd coming to town. The Governor sends out John Steele to stop them, but Steele’s greatly outnumbered. So, he plans to deputize Sonora and his men to fight the Crew gang. 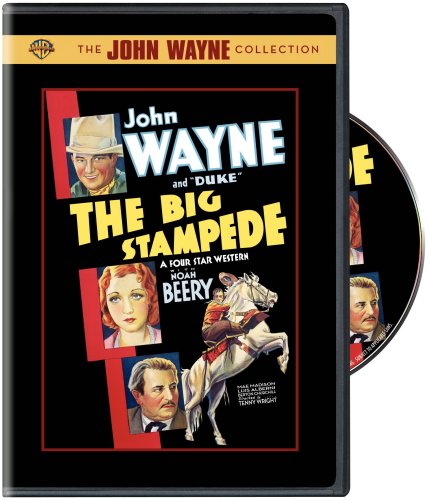 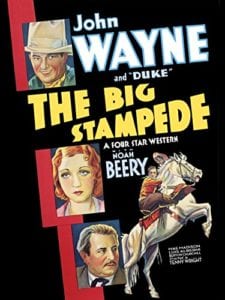 The Big Stampede begins when the Governor of the New Mexico Territory deputizes John Steele (John Wayne) to put an end to rampant cattle rustling in the territory. John poses as a drunken drifter, and observes what is happening. He learns that there are two main rustling gangs. The first is led by Sonora Joe and the other by Sam Crew. Crew poses as an upstanding citizen while employing the dangerous Arizona Frank Bailey to take care of his dirty work.

When news travels to Santa Fe a herd of 5,000 cattle heads to town, John joins the camp to help protect the cattle. He befriends the leader, Cal Brett and his family. John falls for Brett’s pretty niece, Ginger.

Both Sonora Joe and Sam Crew plan to steal the cattle. Arizona Bailey attacks first on behalf of Crew, and Cal Brett dies during a battle.

John Steele deputizes Sonora Joe to help him bring Sam Crew and Arizona Bailey to justice. They arrest Arizona Bailey but Crew will not give up easily. He takes John prisoner and gathers a group to seize the herd.

John’s amazing horse, Duke, rides to the rescue by alerting Sonora Joe to John’s capture. They rescue John, and save the herd.