In the 23rd century, a New York City cabbie, Korben Dallas, finds the fate of the world in his hands when Leeloo falls into his cab. As the embodiment of the fifth element, Leeloo needs to combine with the other four to keep the approaching Great Evil from destroying the world. Together with Father Vito Cornelius and zany broadcaster Ruby Rhod, Dallas must race against time and the wicked industrialist Zorg to save humanity. 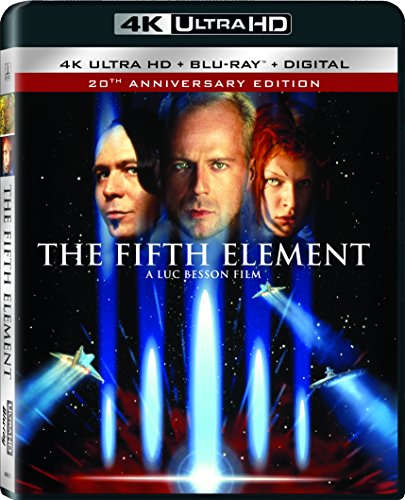 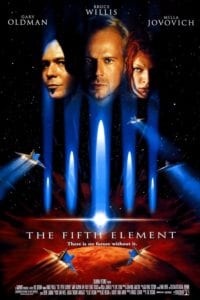 In The Fifth Element, every five thousand years a Great Evil appears to destroy life. That next appearance will happen in the Earth year of 2263 AD. To prepare for this, an alien species known as the Mondoshawan landed on our planet sometime since the last incident and hid on it the only known weapon capable of defeating the threat. This weapon is a collection of four stones representing the Classical Elements of Water, Fire, Earth, and Air. Additionally, there is an eponymous Fifth Element that unites with the other four to create a force so powerful that it can destroy the evil. The aliens hid the stones in a secret chamber inside a small Egyptian temple, and tasked a group of local priests to guard its secrets.

The film begins in the year 1914 in Egypt as the Mondoshawans return and interrupt an overly inquisitive archaeologist studying the ancient hieroglyphs that tell the temple’s history. No longer safe, the aliens take the stones (and a sarcophagus housing the fifth element) off world to safety. The lead alien gives the current priest in charge a key and tells him to pass on his knowledge to future generations.

Three hundred years pass and it’s now 2263. The Great Evil has made itself known in the form of a fiery planet in the middle of empty space. When a fleet of interplanetary battleships arrive to probe the odd appearance for information, the Great Evil is ready for them. Nervous, the Admiral in charge has the battleships fire missiles on the planet. That only feeds the planet and it doubles in size.

Down on Earth, the world’s president, President Lindberg (Tom Lister Jr.), consults with General Munro (Brion James) of the Federated Army and his science advisers about this new threat. While this happens, the Mondoshawans appear in space to deliver the Elements back to Earth. Unfortunately, a shape-shifting alien race called the Mangalores ambush them and kill them all. An Earth industrialist named Jean-Baptiste Emanuel Zorg (Gary Oldman) has hired them to get those stones at any cost.

General Munro informs President Lindberg that the stones were not found at the crash site, but he has it on good authority that the Mondoshawans gave them to a trusted alien named Diva Plavalaguna (Maïwenn) who will next perform on the leisure planet of Fhloston Paradise.

Meanwhile, government scientists have recovered a portion of the Fifth Element’s arm, and they use their biotechnology to recreate the original occupant of the sarcophagus. That occupant is a humanoid woman named Leeloo (Milla Jovovich) whom the scientists describe as the perfect being.

Terrified and untrusting of General Munro, Leeloo easily escapes the scientific arcology when she leaps from its great heights. As she falls to the earth, she crashes the roof of a flying cab belonging to taxi driver Korben Dallas (Bruce Willis). He’s a recently retired Major in the Federated Army’s Special Forces. While she doesn’t speak any english, Korben is able to get out of LeeLoo that she’s looking for a priest named Vito Cornelius (Ian Holm). Unknown to Korben, Cornelius is the current guardian of the Mondoshawans’ knowledge.

When Cornelius realizes who the girl is, he forces Korben our of his apartment so he and his acolyte, David (Charlie Creed-Miles), can help Leeloo recover. At this point Korben is still clueless to her true purpose. Leeloo tells Cornelius that the Mondoshawans didn’t have the four Elements; she tricked the naive Mangalores. She must now must get them from Diva Plavalaguna on Fhloston Paradise.

Meanwhile, the Great Evil uses intergalactic radio waves to make a phone call to Zorg about an update on the stone’s whereabouts. Zorg tells him he doesn’t have them yet, but will soon. The Great Evil threatens him before hanging up. Zorg next meets with the Mangalores who have brought him the case containing the four Elements they stole after their attack on the Mondoshawans. They are to exchange the stones for weapons Zorg makes. When Zorg opens the case, he finds it empty, and with no stones for him, there are no guns for them. Zorg detonates a weapon as he leaves, killing many of them. Now, Zorg must do the job himself and he heads to the planet Fhloston Paradise. The Mangalore’s leader survives the blast, and he decides to get his revenge on Zorg and also steal the stones with his surviving minions.

In another part of the megapolis, General Munro arrives to Korben’s tiny apartment to let him know he’s been drafted back into the Army. He’s to travel to the planet Fhloston Paradise to meet the Diva. To fly under the radar, General Munro rigged the annual Gemini Croquette Contest to allow Korben to win; first prize, two tickets to the lovely planet Fhloston Paradise.

As Korben insists he’s retired and won’t take the job, Leeloo arrives to his apartment too. Excited, Korben hides the General and his two assistants for a quick second to let her in. Cornelius pops out because he’s heard that Korben won the contest. He wants the tickets so he and Leeloo can meet the Diva. Korben offers to help, but when his back is turned, Cornelius knocks him out and steals the tickets before departing with Leeloo.

Once Korben comes to, he accepts General Munro’s mission. He heads to John F. Kennedy International Airport, where he spots David and Leeloo as they’re about to board their flight. Korben pushes David aside so he can escort Leeloo to the planet. Also there are two Mangalores who try to pose as Korben and his date along with one of Zorg’s minions. The check-in agent, suspecting something’s up since Korben’s already boarded, quickly closes the gate and leaves.

David finds Cornelius in an airport bar to tell him the bad news. Cornelius instructs David to prepare the temple in Egypt and then sneaks aboard the spaceplane before it leaves. Inside the spaceplane, Korben meets a flamboyant galactic radio personality named Ruby Rhod (Chris Tucker). Korben will be Ruby’s personal guest for the trip and on his show as the contest’s winner.

Soon they arrive at a space cruise ship orbiting Fhloston Paradise. Ruby takes Korben away to prepare for the performance and Leeloo hides outside the Diva Plavalaguna’s room to await her arrival. She will hand over the stones her after her performance. During the space opera, the Mangalores arrive and begin shooting up the place; one of the bullets fatally strikes Diva Plavalaguna.

Korben tries to help her as she dies. Her last words to him are that she hid the stones inside her. Once dead, Korben pulls the stones from her abdomen and gives them to Ruby who has been screaming like a third grade child the whole time. Korben begins shooting the Mangalores; saving the passengers and crew.

Meanwhile, Leeloo is in Diva Plavalaguna’s room and she takes out the Mangalores ransacking it. By now, Zorg has arrived, and he begins shooting at Leeloo who has to hide in the air ducts above. Once he’s satisfied she’s dead, he takes the case he believes the stones are in and sets a timer attached to a bomb to countdown. He then returns to his ship and flies off.

Back in the room, Korben finds Leeloo exhausted and near death. Ruby is in the room and he finds the bomb counting down and figures they are all near death. Back in his ship, Zorg opens the case to find it empty. If he doesn’t return to the cruise ship now, he will be dead. The ships sensors detect the bomb and orders an evacuation.

Zorg re-enters the cruise ship in all the chaos and heads up to Diva Plavalaguna’s room just as Dallas, Leeloo, Cornelius, and Ruby head down to the dock in a separate elevator. They find Zorg’s ship and flee. Zorg stop his bomb with plenty of time left and as he turns to find the stones, one of the defeated Mangalores wakes up and activates another bomb. Zorg, the Mangalores, and the cruise ship goes boom!

While this has been going on, the Great Evil has been making a beeline towards Earth. However, Korben and the others arrive first and go to the Egyptian temple. By now, Leeloo has seen on the ship’s computers what human war is like and is disillusioned. She doesn’t see the purpose of saving life now that she knows what humanity does to life.

Unfortunately, Cornelius doesn’t know how the stones work, and Leeloo is out cold. When all seems lost, David sighs on the Air stone which reacts ti his breath. Korben finds that to activate each one, they need to match its element; water for Water, fire for Fire, earth for Earth, and air for Air. With Leeloo unwilling to save those from death who willingly kill others, Korben must convince her that all the things worth living for outweigh the bad… and he needs to convince her quick.

After a bit of rambling about love, Korben kisses Leeloo and she releases the Element’s Divine Light. It flies up to the Great Evil and turns it to solid rock; becoming Earth’s newest moon.

Sometime later, President Lindberg and General Munro enter the government lab where Korben and Leeloo “recuperate”. However, the two are too busy getting busy to receive his congratulations. Instead, the President takes a call from Korben’s overbearing mother as the film comes to a close.