The French Colonel Georges Geraud and General Paul DeMarchand lead a group of the struggling settlers in 1818 Alabama after Napoleon’s defeat at Waterloo. By 1819, the exiles have created a thriving community called Demopolis. While on a shopping trip to Mobile, Fleurette DeMarchand, the General’s daughter, meets John Breen, and he’s immediately smitten with the woman. The Kentucky rifleman then marches his regiment through Demopolis so he might court her. However, the needs of her Fleurette’s fellow exiles outweighs her desires for marriage, and that puts her at the mercy of a wealthy man named Blake Randolph who wants her as his bride instead. Unfortunately for him, John has no intention of letting that to happen. He resigns from his regiment, and takes up the fight against Randolph and his minions. 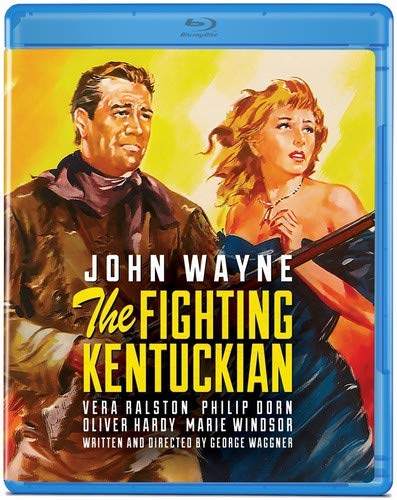 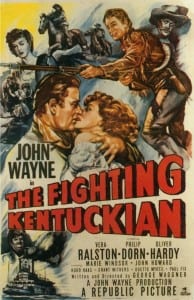 The Fighting Kentuckian begins in 1818 with a Kentucky regiment on its march home that enters Mobile, Alabama. Soldier John Breen (John Wayne) jumps into the carriage of the French General DeMarchand in an attempt to evade his troop. Fleurette DeMarchand sits alone in the carriage, and doesn’t say anything when Breen shows up. Breen falls head over heels in love with Fleurette, and she is smitten with him too. The two share a kiss.

However, Breen spots his buddy, Willie Paine. Knowing that Willie will rat him out, and make him return to his company, Breen drives off with Fleurette. She recommends a place out in the countryside where he can take her.

They come to a stop under a tree and chat, but Fleurette’s fiancé, Blake Randolph, the evil George Hayden, Colonel Georges Geraud, and Mobile’s sheriff quickly interrupt the pair. They place Breen under arrest for a minor assault at a local pub. Luckily for Breen, his troop shows up, and makes him march off with them.

A week and a half later the Kentuckians arrive in the newly founded town of Demopolis, Alabama. There, Breen reunites with Fleurette during a party to celebrate her engagement. Soon, a playful brawl between Hayden’s men and the Kentuckians breaks out over a jug of whiskey. Colonel Geraud then tells Breen the locals are none-too-thrilled to have the French settlers there in Alabama. The next day, the Kentuckians continue their march on home, but Breen and Willie stay behind.

Breen stays so he can try to romance Fleurette. He pays her a visit at her house, but unbeknownst to him, the butler is under General DeMarchand’s orders not to let Breen in. Instead, fiancé, Blake Randolph, shows up, and visits with the General.

As Breen rides home, he spots Willie in an argument with Hayden’s men at a tavern. Breen enters, and tries to calm things with a round of drinks on him. Hayden then shows up, and demands the two split Demopolis right away because they don’t have a job.

Hayden’s lady friend, Ann Logan, intervenes, and says she met Breen six years ago in Kentucky, and that he’s a surveyor. Since he has a job, there’s no reason for him to leave. Willie and Breen return to their cabin to find someone has delivered some surveying equipment to them. Ann shows up, and says the equipment belonged to her fiancé who died in a cabin fire. A jury concluded the cause was an accident, but Ann implies Hayden arranged his death.

Being the Boy Scout that Breen is, he pledges to bring Hayden to justice. In the morning, Wille and Breen attempt to survey the land. Fiancé, Blake Randolph sees them, and reports back to Hayden. He worries that Breen will uncover their plot to steal the French settler’s land, but Hayden is two steps ahead of everyone. He already has Beau Merritt watching over the men.

Willie and Breen are terrible surveyors, but when Breen discovers a boundary marker, he’s promptly shot in the wrist. They head over to the first cabin they can find for help. There, Marie, a young French girl tends to Breen’s wound. As she does this, Fleurette shows up to have Marie finish her wedding dress. Breen is about to put his best moves on her, but fiancé, Blake Randolph arrives for the cock block.

That evening, General DeMarchand throws another party at his home. Willie and Breen sneak in as fiddle players so that Breen can get some face time with Fleurette. Fiancé, Blake Randolph lures Breen outside so that he can tell him THEIR marriage will happen. That doesn’t stop Breen. He marches back in the house, finds Fleurette, and tells her she will marry him and not Randolph. She agrees to run off with Breen later that night.

Later, when Breen goes to pick up Fleurette, General DeMarchand finally decides to meet with Breen for a chat in his cabin. DeMarchand calmly explains that the only hope his settlers have for survival in Alabama is to forge alliances with influential people. That means Fleurette’s wedding with Randolph must go on. He successfully convinces Breen not to take Fleurette away.

Breen returns back to his cabin where Willie attempts to play Colonel Geraud in chess. The Colonel gives Breen a letter that arrived a few days prior. It from the former surveyor. He believes some of the French settlers have settled outside their designated boundaries, and he wants the men to look into it.

Breen, realizing Ann lied to him about the death of her fiancé, heads off to confront her. He sneaks into her room where he overhears her plot with Beau Merritt to steal Randolph’s fortune. Breen interrupts the two, and puts a gun to Beau’s head. He tells Breen of Hayden and Randolph’s plot to trick the French into settling on the wrong land, and then take it all back from them; which will happen the next morning.

Breen hightails it to General DeMarchand’s home to tell him what he’s learned, but Hayden and Randolph show up to arrest him. Meanwhile, Wille is on his way to retrieve his fellow Kentuckian company, and save Breen and the French settlers.

The next morning, Fleurette lets it be known to Randolph that she loves Breen, and there’s nothing he can do about it. Randolph postpones the wedding as General DeMarchand orders all French settlers to his home in case Breen was telling the truth.

When Randolph learns Hayden’s men are attacking the settlers, he heads to Hayden’s place to have him stop the fighting. Instead, Hayden throws Randolph into the jail cell with Breen. Ann enters their cell to give them food, and then leaves…with the door unlocked. Hayden plans on letting the men escape, and then shoot them as they leave.

Randolph knows of Hayden’s plan, and momentarily knocks out Breen. He then leaves the jail where Hayden shoots him in the back. Breen is able to successfully escape while Hayden is off shooting Ann for stealing his money from his safe.

Both men get on horses, and Breen chases Hayden to the General’s home where Hayden’s men are attacking it. There, Breen kills Hayden in front of his men, and his men then attack in retaliation. The men have the upper hand until Willie, and those Fighting Kentuckians, show up to save the day!

Days after the battle, Breen marries Fleurette, and the Kentuckians (with Willie) continue their 600-mile march home.