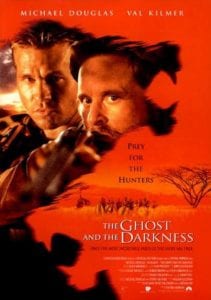 Not exactly factual but think “Jaws” set in the African plains

I’ll forget facts for a moment about “The Man-eaters of Tsalvo” and focus on this entertaining story about two man-eater lions thirsting for blood on the African plains in the middle of a race to build the first African transcontinental railway system. I had watched this movie the year it came out in 1996. It looks as good now as it did when new since it was set in the late-1890s and looks like it.

Gorgeous, magical cinematography. The setting is lush and very African-specific, as it should be. The main actors, background characters, and direction were perfectly executed. Magnificent actually. I had also read that William Goldman (screenwriter) had written this true story based on a 1910 book by the main character, Colonel John Patterson. It’s scary, and this event really happened. Just not entirely as written for the screen…

Basic story: Col. Patterson (Val Kilmer) is a charismatic and visionary bridge builder who has a tight time-frame to build a railroad across a specific river in Africa to keep Great Britain ahead of the French and German railroads in a race for African dominance in the days of empires. If he succeeds, it’s a knighthood. If he fails, his career is finished by his sadistic benefactor. Once he arrives, almost immediately workers start mysteriously disappearing. They realize a lion is attacking them.

What they don’t realize is this is no mere hungry lion. It’s a man-eater. And there are two of them. Through a series of events, they hire a legendary hunter, Charles Remington (Michael Douglas), to track down and kill the blood-thirsty beasts. What transpires is a cat-and-mouse game (pun intended) where who is hunted and who is the prey is always in question until the very end.

This is a good movie. Don’t get me wrong. I watched it again last night for a reason. However, had this story not started with the narrator telling us, “…And no matter how outrageous it seems, all of it is true,” it would have been easier to take. That part is not factual. For one — there is no Michael Douglas character in real-life. When the cover of the poster and DVD cover shows two main characters — and one of them isn’t factual — yet your narrator says everything we see really happened…

You see where I’m going with this. Had they just stated, “This is based on a very real, very scary story in the heart of Africa,” I would have understood artistic license. Douglas was fascinating as the fictional Remington btw and well worth the addition to the script. Dramatically, the story was enhanced in some very keen ways. Unfortunately, that “true story” part keeps rearing it’s ugly head. Oh well. Minor issues I guess.

Overall, this is a very enjoyable movie adapted for the screen. Kilmer is terrific as Patterson (although his Irish (I think?) accent comes and goes at mysterious times). Douglas is mesmerizing as the mercurial Remington. The supporting natives and landscapes are breathtaking and fantastic. Just don’t go in with expectations this is the entire true story of “The Man-eaters of Tsalvo”. You’ll have to read the book for the facts.

Watch this movie expecting to see a stunning African tale of overcoming terror in the jungle by an unstoppable force of nature and you will be rewarded with a first-class production. Think “Jaws” in the African plains. It’s that terrifying for the natives. 8.5 out of 10 from that perspective. But I rate it a 7 out of 10 simply because it lauds the facts openly and proudly but ignores them for the production. Pretend this is an original, well-written, FICTIONAL screenplay that could possibly happen in real-life (because it did) and enjoy the show. Worth watching for sure.

A bridge engineer and an experienced old hunter begin a hunt for two lions after they start attacking local construction workers.