The film begins when the mysterious Sardo Numspa kidnaps the mystical bearer of virtue and kindness known as the Golden Child. This disrupts the fine balance between the forces of good and evil, and has unforeseen consequences. To save humanity, the beautiful Tibetan Kee Nang recruits the Los Angeles-based freelance lost children searcher, Chandler Jarrell, to find the missing boy. However, Chandler is quite skeptical of the woman’s story, but looks for the boy. In time, Chandler realizes that all that he is all that stands between the Golden Child and the powers of darkness. 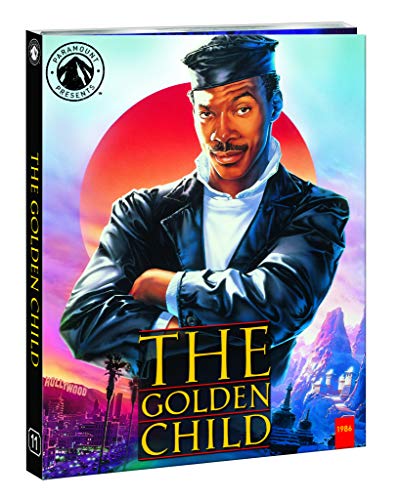 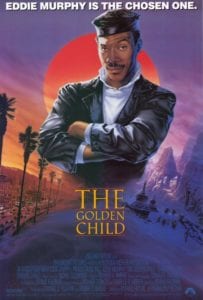 The Golden Child opens in present day Tibet. There, a well-dressed Charles Dance leads a trio of strange henchmen to kidnap a chrome-dome kid, but not before the kid brings a bird back to life which follows him across the globe.

Back in L.A Chandler goes about his business nailing pictures to posts in the streets and appearing on talk back television searching for a lost girl until he is approached by the gorgeous Charlotte Lewis who actually appeared in an worse film ‘Roman Polanski’s Pirates’ released the same year.

Better known as Kee Nang, she talks Chandler into teaming up to find her missing Buddhist Golden Child and thus the fun begins including sleeping together.

Chasing, fighting and spiritual scenes all rolled into one even one including a rattlesnake lady philosopher while not to mention product placement at a premium when a Pepsi can dances to the tune of puttin on the ritz.

In an attempt at pure hilarity Chandler has to complete a booby-trapped chamber of horrors holding a glass of water not spilling a drop only to figure out when surrounded by fire all he has to do is drink it to put the flames out.

As Murphy mugs the screen every second of screen time he can character development scenes are almost non-existent but at least we see the reunion of James Hong and Victor Wong together again direct from Big Trouble in Little China, released the same years as this.

The lameness continues when trekking back to Tibet in order to confiscate an enchanted sacred dagger while fighting a stop motion demon courtesy of Industrial Light and Magic the same technological wizards who thought up Jeffrey Jones turning into an electrical beast in Howard the Duck, yes in the same year as this.

It all ends with The Golden Child now out of his traditional robes into 80’s street wear holding hands with Charlotte and Eddie all practically skipping together over a grassy Los Angeles knoll discussing going back to Nepal.