John Tipton is a federal agent determined to break up Charles K. Plummer’s corrupt Wyoming-territory political machine. Plummer is a politician by day and the head of a corrupt vigilante army by night, bent on killing anyone who opposes his reign. Major Carter is a newspaper editor in town with his lovely daughter to cover the eventual election for the statehood of Wyoming. Murder and mayhem soon follows. 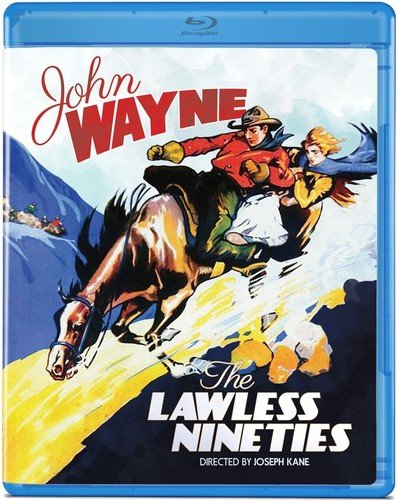 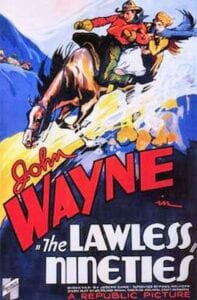 The Lawless Nineties takes place in the territory of Wyoming ca 1890. The U.S. government sends two agents, John Tipton (John Wayne) and a man named Bridger, undercover to Crocket City, Wyoming to ensure the vote on whether to join the Union is on the up and up.

At this time, Wyoming is overrun with outlaws hell-bent on keeping the territory from becoming a state. Charles Plummer leads one such group in town, and his hired thugs run off any homesteader in their path to keep them from voting in the election.

As John and Bridger split up, John meets Major Carter, his daughter Janet, and their servant Moses when they fall behind a wagon train. Major Carter has just bought the local newspaper, the Crockett City Blade, sight unseen, and plans to use it to call out the dirty outlaws.

Obviously, Plummer wants the lawlessness to continue on, and as the chairman of the Law and Order Committee, he quickly pays Carter a visit. There, he lets Carter know that his stance is not a healthy one. However, Carter is undeterred. So Plummer has his men kill him in a staged fight.

Soon Plummer is able to discern that Bridger is one of the government agents sent out to stop him after a wiretapper he employs intercepts a coded telegram. Plummer has his men ambush Bridger. They shoot him in the back, and leave him for dead.

Now with his best friend dead, John sends some fake telegrams to nab some of Plummer’s men. However, it’s not until one of Plummer’s men captures John, and brings him to Plummer’s hotel room that John learns their leader’s true identity.

John manages to escape their evil clutches, and on the day of the election, he has his men around the state organize the homesteaders. They mount up their horses, and set out to fight anyone trying to prevent voting. Plummer’s outlaws initially manage to keep the men away from the polls, but then John’s posse arrives to confront them.

They blow up their barricade, arrest all the bad guys, and save the town from Plummer. Wyoming becomes a state. John gets Major Carter’s daughter, and Moses falls for Mandy Lou.