Based on the novel by Giusuppe Tomas di Lampedusa, The Leopard chronicles the changes to Sicilian life and society during the Risorgimento in 1860. Don Fabrizio Corbera, the Prince of Salina, and his family have long lived a life of privilege, largely isolated from the poverty experienced by the masses due to government corruption which pervades the island. The film traces with a slow and inexorable rhythm the waning of the noble home of the Prince’s family and the rise of the wealthy ex-peasant Don Calogero Sedara. 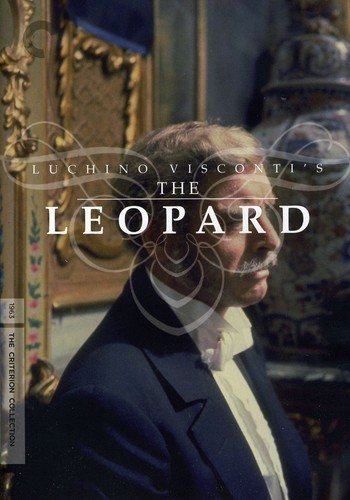 The Leopard (The Criterion Collection) 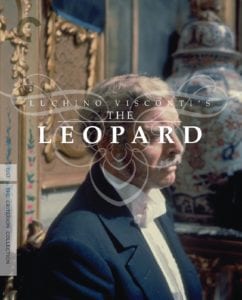 The Leopard begins in 1860 Sicily. Don Fabrizio Corbera, the Prince of Salina (Burt Lancaster), and his family enjoy the customary comforts and privileges of an ancient and noble name. However, war has come to their lands. The armies of Frances II of the Two Sicilies and the insurgent volunteer redshirts of Giuseppe Garibaldi clash across the land in a battle to liberate Sicily from Austrian rule. Garibaldi’s forces include the Prince’s young nephew, Tancredi Falconeri (Alain Delon). Tancredi is incredibly handsome and daring and draws the attention of most women. The Prince takes delight in Tancredi’s romantic impressions of politics and sees some of his younger self in his nephew.

When the Prince hears of the uprising, he departs for nearby Palermo with Father Pirrone (Romolo Valli) to visit his mistress. Pirrone is aware of the Prince’s infidelities and disapproves. Nevertheless, the Prince drops the priest off at the church and then heads to a rundown alley in a poor area of the village for a distraction from his world.

Meanwhile, Garibaldi’s army, along with Tancredi, conquer Palermo and liberate Sicily from the Bourbons. Observing the beginning of a transition to a new government, the Prince discusses the inevitability of change in the world and notes that the middle class is progressively displacing the hereditary ruling class while everything remains the same on the surface.

After the liberation of Palermo, the Prince takes his family to his summer palace at Donnafugata. The new national assembly calls a vote on what form the new government shall take. The nationalists in Donnafugata win the vote 512-0 thanks to the corruption of the town’s mayor, Don Calogero Sedara (Paolo Stoppa). The Prince, although in favor of the nationalist movement, learns of the corruption through one of his employees who tells him that he voted against the nationalist agenda, meaning that the election results were fixed. Nevertheless, the Prince supports the change in government.

Soon after, the Prince holds a get together at his home and invites Don Calogero and his daughter, Angelica (Claudia Cardinale). Calogero believes that his daughter may be the key to breaking into high society and uses her to open doors to new possibilities. Angelica is extremely beautiful and catches the attention of the Prince and Tancredi. Unfortunately, the Prince’s own daughter, Concetta (Lucilla Morlacchi), has fallen in love with Tancredi and hopes to marry him. However, the beauty of Angelica overwhelms Tancredi who quickly falls in love with the mayor’s daughter. The mayor himself encourages his daughter to pursue a relationship with Tancredi, and eventually, the Prince’s nephew asks his uncle to help broker a deal for Angelica’s hand in marriage.

The Prince, who himself has fallen in love with the idea of Angelica, sees the wisdom of the match even though it breaks his daughter’s heart. Tancredi is ambitious, but cash poor, and could benefit from the money that Calogero could provide him in a dowry. In exchange, Calogero’s name would have more prestige and he would be provided with a higher status in society. Both Calogero and the Prince support the union which will be beneficial for all parties. Tancredi tries to sooth the broken heart of Concetta by trying to arrange a relationship with his friend, Count Cavriaghi (Terence Hill), but the broken hearted Concetta rejects all suitors.

Soon after, a visitor from the constituent assembly comes to the villa to meet with the Prince. The visitor begs with the Prince to allow his name to be submitted to join the senate and help direct the shape of the government. He appeals to the Prince’s sense of duty to volunteer his name to help alleviate the poverty and ignorance that is everywhere on the streets of Sicily. However, the Prince respectively refuses the request, claiming that Sicily prefers its sleep to the agitations of modernity because its people are proud of who they are. The Prince sees a future when the leopards and the lions, such as himself and his visitor, along with the sheep and the jackals, will all live according to the same law. However, the Prince does not want to be a part of the democratic vision himself.

Not long after, the Prince notices that Tancredi has shifted his allegiances from the insurgent Garibaldi to the king’s army. He notes to himself that his beloved nephew is the kind of opportunist and time-server who will flourish in the new Italy, unlike himself.

Shortly thereafter, a ball is held at the villa of a neighboring Prince, and the Salinas family and Tancredi attend. The Prince wanders aimlessly around the party, lost in a fog of melancholia and nostalgia. He realizes that his time has passed and that he no longer represents what Sicilian society has evolved into. He is brought out of his haze when the beautiful Angelica asks him to dance a waltz with her. Momentarily returned to his youth, he smiles and dances with Angelica, once again becoming the elegant and dashing figure of his past.

After the ball, the Prince decides to walk himself home through the village to clear his head. He asks Tancredi to arrange a carriage for the family. He walks through the dark streets alone, stopping to prey when a young priest walks by. In the distance, the king’s men fire shots that kill some insurgents who oppose the newly formed government. After his prayer, the Prince walks down the same dark alley that he visited in the beginning of the film, looking for another moment to remind him of his youth, but knowing that he now symbolizes Italy’s inordinate and fading past.