In The Love Guru Pitka has always wanted to be a guru since the age of 12. His Guru, Tugginmypudha, disapproves of his reason for wanting to become one, and make him wear a chastity belt until he learns to love himself. Years pass, and Guru Pitka lives in America. He wants to appear on the Oprah Show so the public sees him as a better Guru than Deepak Chopra.

When Jane Bullard, the owner of the Toronto Maple Leafs, hires him to counsel their star hockey player, Darren Roanoke, Pitka sees it as his opportunity to be on Oprah. All he has to do is get Darren back together with his wife, Prudence. She’s currently banging the Kings’ goalie, Jacques “Lè Cocq” Grandé. 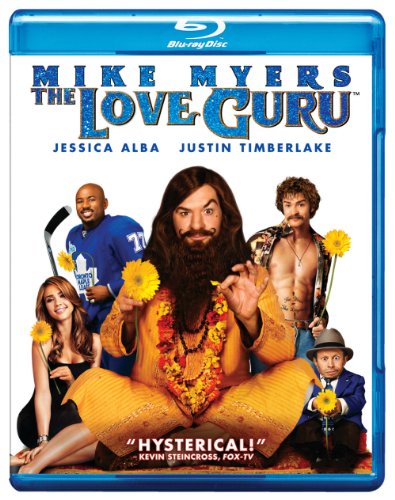 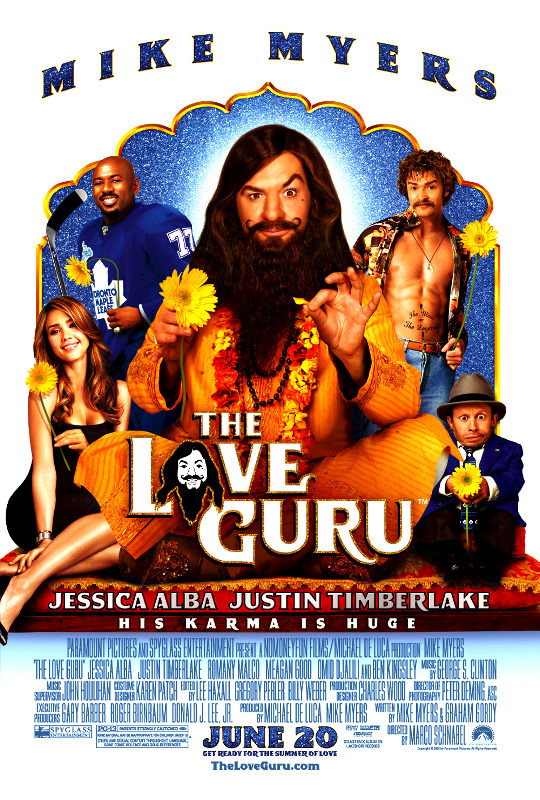 In The Love Guru, Guru Pitka (Mike Myers) is the number-two Guru in the world, after Deepak Chopra. When he was a little orphan, Guru Tugginmypudha (Ben Kingsley) taught him in the Guru ways. However, his 12-year-old self only wants to become a Guru so that girls will love him. That’s not a good answer, so Tugginmypudha orders him to wear a chastity belt until he learns that loving himself is more important than others loving him.

Pitka wants to appear on The Oprah Winfrey Show which will help him become the number one Guru in the world. He’s close to it with thousands of followers, including celebrities like Jessica Simpson, Val Kilmer and Mariska Hargitay.

Jane’s a superfan of Pitka’s, and has read all his books. She wants to pay him $2 million to save Darren’s marriage. In theory, with him happy again, her team can win the Stanley Cup. Additionally, Pitka’s agent, Richard “Dick” Pants (John Oliver), tells him that if he succeeds, Oprah will bring him on her show.

During a plane ride back to Toronto, Pitka and Jane talk about the death of her father. She then confides that she has a crush on him. Even though he’s a love guru, Pitka doesn’t have much of a game, but he still asks her if she has a man in her life . She says no, and blames if on her Bullard Curse. It keeps the team from winning, and the fans (and all the men in town) hate her so much that they throw food at her upon sight. She can’t get a guy to save her life.

When the Stanley Cup begins, Pitka encourages the Kings to beat up Darren during the game in hopes it will distract him from his wife’s affair. It works, and Darren begins to play well. Unfortunately, he winds up suspended for the next two games for fighting Le Cocq, and then hitting Coach Cherkov (Verne Troyer) with a hockey puck.

Later, when Pitka has dinner with Jane, he tries to give her a kiss, but we hear a ding from his chastity belt. She thinks he’s leading her on, and she runs off. Later, Pitka advises Darren to write an apology letter to Prudence, and then goes off to deliver it for him. Pitka must fight off a large rooster to give it to her.

With Darren suspended, the Maple Leafs lose their first three games. Coach Cherkov then loses his shit on Jane, and follows it up with a stiff punch to Pitka’s groin. I’m not sure how that works with the chastity belt, but he falls to the ground in pain anyway.

Dick Pants shows up again to tell him if he doesn’t hurry up, Oprah will give his spot to Deepak Chopra. However, Pitka says Darren isn’t ready. Dick pushes him anyway. Pitka takes Darren to confront his mother, Lillian (Telma Hopkins), but her aggressive manner scares both of them off. He then helps Darren to realize that since his mother only showed him love when he succeeded, he subconsciously believes Prudence only loves him as long as he’s a winner.

With time running out, Pitka takes a shortcut to bring the two back together. He goes to the nightclub Prudence and Le Cocq are at, and brings in Le Cocq’s idol, Celine Dion, to distract him with an onstage performance. He then tells Prudence that Darren finally stood up to his mom (which is a white guru lie). That message is all Prudence needs to hear to return to Darren.

Darren comes off his suspension to tie the series up. For the last game of the Stanley Cup, Le Cocq, knowing that Darren cannot play with his mother present, brings her in to sing the national anthem. Darren sees her, and then runs off the ice like a scared little girl.

Meanwhile, Pitka is at the airport on his way to Oprah’s show. There he sees Darren’s mother on TV, he knows there’s going to be trouble, and returns to help Darren—against Dick’s wishes. Once back in the arena, Pitka helps Darren confront his mother, and he is finally confident enough to return to the ice.

Once that happens, there’s only six minutes left in the game to win it. Darren dresses, goes back onto the ice, and ties it up. As the clock’s about to wind down, a Kings player fouls Darren’s, and the ref awards him a penalty shot. All he has to do is score on Le Cocq like Le Cocq scored on his wife, and they win the Stanley Cup.

Before the play, Le Cocq skates up to him and says, “DAMN!” Of course he’s referring to what Prudence exclaimed when she first saw his mighty cock. Darren regresses, and freezes again.

This distraction is all Darren needs to snap out of it to score the winning goal and take the trophy. Now the fans can hate Jane a little less too. After the game, Pitka and Jane make up. Deepak Chopra shows up for some reason to tell him he will be on Oprah instead., but he’s proud of Pitka. Once he leaves, Pitka sucker punches Coach Cherkov for a happy ending.

Back in India, Guru Tugginmypudha tells Pitka that he’s finally learned to love himself, and can remove his chastity belt. When Pitka asks for the key, he replies that there isn’t one, and just presses the button on the back to release it. Our film ends with Jane and Pitka dancing away Bollywood-style.

In a post credit scene, the director asks the camera man to lower the shot with Coach Cherkov because all he can see are asses. The actor, Verne Troyer, responds, “Now you know how I feel.”