Sixty years after the events in The Matrix Revolutions, a new generation of human survivors infiltrate the Matrix looking for Neo, a man who most believed died at the end of the Machine War. An older Neo has once again taken up his life as Thomas Anderson, a revolutionary video game developer who created the famous Matrix video game series. When Neo’s memories of his past begin to return, he soon finds himself stuck in a battle between machines and humans again. However, when Neo discovers that Trinity is also alive, Neo is willing to sacrifice everything to save his true love. 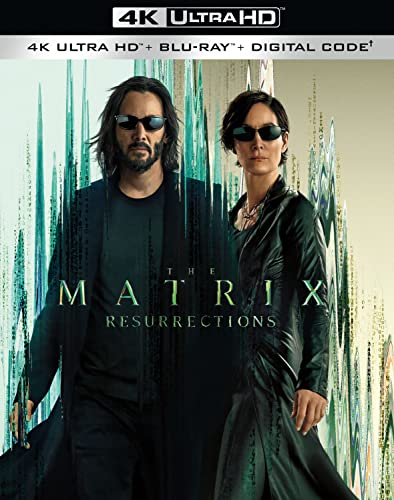 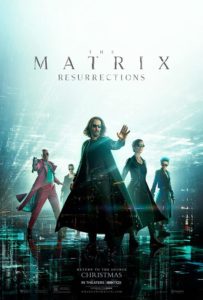 Sixty years after the events in The Matrix Revolutions, the captain of the hovercraft Mnemosyne, Bugs (Jessica Henwick), encounters a modal instance of the events of Trinity discovering the location of Neo, a scene from the first Matrix film. Much as in that film, a group of agents arrive, including Agent Smith (Yahya Abdul-Mateen), who detects the eavesdropping Bugs. The agents begin chasing Bugs throughout the Matrix. Eventually, Bugs is captured by Agent Smith, who is behaving strangely. She discovers that this version of Smith is the embodiment of Morpheus (Laurence Fishburne). Bugs helps the “new” Morpheus to get free from the Matrix before he can be erased.

Meanwhile, Thomas Anderson (Keanu Reeves) is a successful video game developer in the Matrix. Thomas is best known for his creation of a trilogy of video games based on his dreams of the Matrix twenty years before. The video game company is looking to create a new Matrix game, which Thomas is hesitant to be involved with. Thomas’s business partner (Jonathan Groff) insists that Thomas be involved in the game development despite Thomas’ apprehension to do so.

Thomas leads an uneventful and unfulfilling life. He spends much of free time frequenting a coffee shop where he watches a woman named Tiffany (Carrie-Anne Moss), a married woman with two children. Thomas is attracted to Tiffany, but he does not talk to her until pushed by a fellow employee to do so. Thomas visits his therapist (Neil Patrick Harris) to discuss his fears about working on a Matrix game again. The therapist reminds Thomas of his mental problems previously, including Thomas’ attempt to leap off a building. The therapist reminds Thomas to continue to take his medication, a series of blue pills. However, Thomas decides to stop taking his medication.

The most important choice in Neo’s life isn’t his to make. Sati (Priyanka Chopra Jones)

Not long afterwards, Thomas notices an intruder in a private instance of his game. The instance is deleted by his business partner. At the same time outside the Matrix, Bugs and Morpheus locate Thomas’ signal within the Matrix. They are confused as it was widely believed that Neo died at the end of the Machine War decades before. They trace the signal to Thomas and realize that Thomas has subconsciously run the modal instance to allow Morpheus to be freed from the Matrix. Bugs and her crew enter the Matrix to locate Thomas’ body in the real world. Once they locate Thomas, the Matrix reacts to prevent Bugs and Morpheus from restoring Thomas’ memory of his existence as Neo. Thomas’ business partner is revealed to be the original Agent Smith who once again works against Thomas. The Matrix uses “swarm mode” to take over the bodies of people in the Matrix to stop Thomas. Bugs and Morpheus explain to Thomas that he is within the Matrix’s simulation again. Initially hesitant, Thomas agrees to be extracted.

Thomas, now Neo, awakes in his pod with his memories of his passed life as Neo restored. A pair of robots takes Thomas’ body to Bugs’ ship. While escaping, Neo sees a second pod that contains Trinity nearby, but Bugs’ group is forced to leave Trinity behind. Once free, Neo is placed in a loading construct with Morpheus. Morpheus reveals that Neo created him as an algorithmic reflection of the two forces that helped Neo become the famous “One,” Morpheus and Agent Smith.

Neo is taken to a new human city of Io that contains both humans and machines. The city is overseen by an elderly Niobe (Jada Pinkett Smith), who is displeased with Bugs for disobeying orders not to abduct anyone from the Matrix. Niobe tells Neo that the peace that he helped create is still in effect, and that the human survivors have allied with machines in and outside of the Matrix to keep the system working against an Anomaly within it. Niobe takes Neo to meet Sati (Priyanka Chopra Jonas), the little girl program from The Matrix Revolutions. Sati explains that the Anomaly was created after the Machine War and had somehow resurrected Neo and Trinity. The Anomaly kept Neo and Trinity isolated from others, but more importantly, kept Neo and Trinity away from each other. Neo wishes to return to the Matrix to free Trinity, but Sati warns against it and Niobe orders him to stay out and takes him into custody.

Bugs and her crew disobey orders and break Neo out and make plans to free Trinity. Neo and Bugs reenter the Matrix and encounter Agent Smith, the Merovingian (Lambert Wilson), and other exile programs that wish the Matrix to be returned to its previous incarnation. Bugs’ crew fights the exiles while Neo and Agent Smith battle once again. Neo’s abilities to bend the rules of reality slowly begin to return. Neo defeats Smith and then heads to Tiffany’s repair shop to attempt to convince her to willingly leave the Matrix and resume her life as Trinity. Neo’s therapist arrives and reveals himself to be the Analyst. He freezes Neo and the surrounding reality.

Neo and Bugs escape the Matrix and return to the real world. They are taken back to Io by a ship loyal to Niobe. Neo persuades Niobe to help him free Trinity. The pair work with Bugs and Sati to produce a plan for Trinity to escape. Neo reenters the Matrix and demands the Analyst release Trinity if she decides that she wants to willingly leave. The Analyst agrees to the arrangement. Tiffany is brought to the coffee shop and Neo asks her to leave the Matrix. Tiffany’s family arrives and she rejects Neo’s offer. A few moments later, Tiffany rejects her identity and resumes her life as Trinity, ready to leave the Matrix.

The Analyst once again freezes reality and threatens to kill Trinity again. Agent Smith arrives and stops the Analyst, which gives Neo, Trinity, and all the others time to escape. Neo and Trinity race on Trinity’s motorcycle through the city while Bugs and the others work on a way to extract them from the Matrix. The Analyst releases another swarm against the couple. Neo and Trinity climb to the top of a skyscraper where they become cornered. Rather than face reimplantation within the Matrix, Neo and Trinity choose to jump off the edge, hoping that Neo’s power of flight will save them. However, Neo’s powers fail, but Trinity develops her own ability to fly. The two escape and regain control of the Matrix.

Later, Neo and Trinity return to the Matrix and confront the Analyst. The couple promise to remake the Matrix in their own vision. They inform the Analyst of the danger of trying to interfere with their plans before the couple fly off together, this time with Neo’s ability to fly restored.