Frank Drebin and Police Squad are back! This time, Drebin and his partners stumble into a plan to kidnap a top scientist who is about to publish his report on energy supplies for the future. The coal, oil, and nuclear industries are concerned about the report and join with the evil plans of Quentin Hapsburg, a corporate executive of a major oil company and Jane Spencer’s new boyfriend. However, when Drebin sees Jane, will he be able to set aside his personal feelings and foil the evil plans of the villainous energy industry executives? 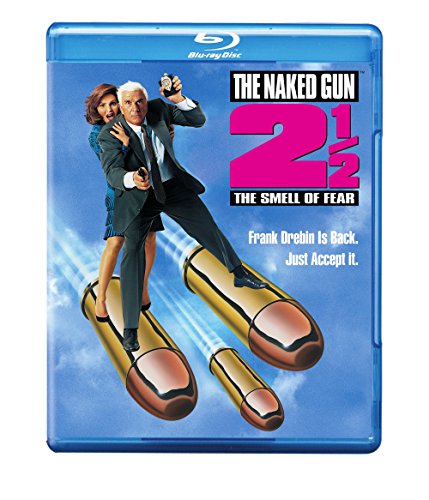 ‘The Naked Gun 2½: The Smell of Fear’ Movie Summary 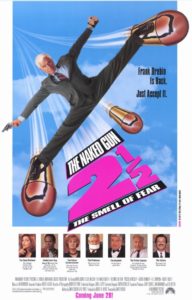 Frank Drebin (Leslie Nielsen) is back! This time he leads a law enforcement delegation to Washington D.C. Drebin is being honored at the White House by President George H.W. Bush (John Roarke). At the honorary dinner, President Bush announces that he will base his recommendation for the country’s energy program on the advice of Dr. Albert Meinheimer’s (Richard Griffiths), one of the leading experts on energy production as well as an advocate for renewable energy. Dr. Meinheimer plans to make his recommendation at the National Press Club dinner the following week. The President’s reliance on Meinheimer disturbs the heads of the coal, oil, and nuclear industries.

Meanwhile, Jane Spencer (Priscilla Presley) is still trying to get over the end of her relationship with Drebin. Jane is also in Washington D.C. and now works for Dr. Meinheimer. One night while she is working late, she notices a man leaving in a van. Shortly afterwards, a maintenance worker finds a bomb that explodes in the lobby of the building. Several people are killed, but Jane survives unharmed.

The next morning, Drebin and Police Squad are called in to investigate the explosion. Drebin is accompanied by his boss, Ed Hocken (George Kennedy), and his partner, Detective Nordberg (O.J. Simpson). Drebin is unaware of Jane’s employment with Meinheimer’s institute. He is also unaware of Jane’s new boyfriend, Hexagon Oil executive Quentin Hapsburg (Robert Goulet), who Drebin immediately becomes jealous of. Jane informs Drebin of the man she saw immediately before the explosion. However, Drebin’s jealousy ruins any chance of a reunification.

Later that night, the leaders of the coal, oil, and nuclear industries have a secret meeting with Hapsburg where he reveals that he has kidnapped Dr. Meinheimer and found an exact double for him, Earl Hacker (Richard Griffiths). Hapsburg plans to have Hacker impersonate Meinheimer and advocate for further reliance on fossil and nuclear fuels at the Press Club dinner.

Meanwhile, Drebin and Police Squad track down the potential bomber and van driver, Hector Savage (Anthony James). Savage barricades himself in a house and demands money and a car when he learns that the police are onto him. Drebin clumsily drives the SWAT tank into and through Savage’s house, which allows the bomber to escape. Drebin ends up crashing into the city zoo and releasing many animals out onto the streets of Washington D.C.

Later that night, Drebin attends a formal dinner and notices that Dr. Meinheimer does not instantly remember him, despite Jane telling him that the doctor has a photographic memory. Drebin goes to Jane’s apartment that night and shares his suspicions. However, Jane dismisses Drebin’s allegations as the further ramblings of a jealous former lover. A few moments later, Savage enters Jane’s home and tries to kill her while she is in the shower. Drebin hears Jane’s screams and comes to her rescue. Savage and Drebin fight, and Drebin kills Savage by sticking a fire hose into his mouth and turning it on full blast. Jane realizes that Drebin was right all along and the two former lovers reunite.

The next day, Police Squad stakes out Hexagon’s Oil headquarters where Dr. Meinheimer is being held. Drebin tries to infiltrate the building, but he is captured and tied up by Hapsburg’s men. Eventually, Drebin and Meinheimer free themselves, and they proceed to the Press Club dinner with the rest of Police Squad. Drebin, Ed, Nordberg, and Dr. Meinheimer sneak into the dinner dressed as a mariachi band. Hacker is intercepted and detained, allowing Meinheimer to give his original speech.

Hapsburg escapes the dinner and takes Jane with him. Drebin and Hapsburg’s men get into a shoot out on the roof of the building. Eventually, Drebin catches up with Hapsburg, who informs the police officer that he has rigged the building with a small nuclear device which will destroy much of Washington D.C. Drebin and Hapsburg fight. Drebin tries to learn the deactivation code from Hapsburg. Ed enters the room and knocks Hapsburg out of a window. Fortunately, despite the enormous fall, Hapsburg lands safely on an awning. Unfortunately, he is immediately mauled by an escaped lion from the zoo.

Desperately, Drebin and Jane attempt to disarm the bomb while Ed and Nordberg attempt to evacuate the building. After several failures, Drebin gives up and grabs Jane to make a run for it. He trips over the bomb’s power cord, unplugging it and stopping the countdown. In the aftermath, President Bush gives Drebin another commendation and offers him a special post as head of the Federal Bureau of Police Squad. Drebin declines, wishing to spend more time with Jane. He asks Jane to marry him, which she gladly accepts.