The Notorious Phantom, a world-renowned jewel thief, steals his way around Europe; leaving nothing but his glove at the scene of the crime. Inspector Clouseau of the Sûreté is an expert on the Phantom, but nothing else really. He’s sure the Phantom will next strike in Switzerland, where Princess Dala vacations with her famous diamond, The Pink Panther. However, Clouseau doesn’t know the Phantom’s true identity, but his wife does, and she’s not telling. After Dala’s diamond is stolen, Clouseau finds himself a suspect in the theft as well, but will his wife help clear him or her boyfriend, Sir Charles of any wrongdoing in the matter? 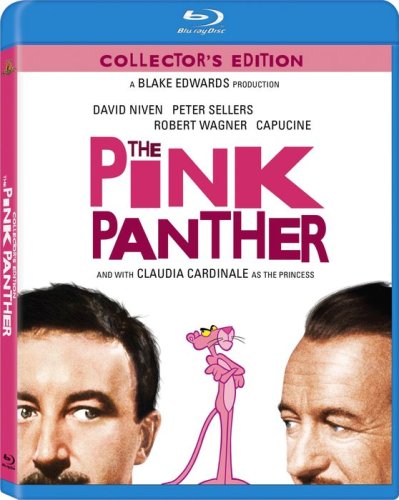 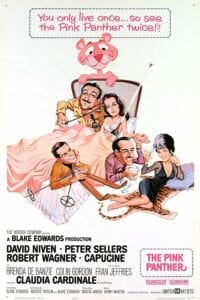 The film begins with the Shah of Lugash giving his little daughter, Princess Dala, a diamond called The Pink Panther. It’s the largest of its kind in the world, but it has one huge flaw; when you look into it, there is a tiny discoloration which resembles a pink panther jumping.

After the cartoon character of the Pink Panther presents the opening credits, the film catches up with Dala who is now a young women. Rebels have taken control of her country, and demand her precious jewel. However, she refuses. So, she does what any young exile would do next. She heads to an exclusive skiing resort in Cortina d’Ampezzo for a bit of a well-deserved holiday.

Also at the resort is the notorious British playboy, Sir Charles Lytton who has a secret life as a jewel thief called The Phantom. With him is his American nephew, George, and he’s a bit of a playboy too. George wants to steal Dala’s diamond, and then blame it on the Phantom. However, he’s clueless to the Phantom’s true identity too.

Hot on the trail of the Phantom is the Sûreté’s finest police inspector, Jacques Clouseau. His wife, Simone, is both Charles’ lover and the Phantom’s willing accomplice. She spends most of the film both dodging both her husband and George, who’ has developed a huge crush on the lady.

For his part, Clouseau makes earnest attempts to stop the Phantom. However, he’s the most bumbling and clueless inspector that France has ever known. In fact, he looks everywhere, but the right place for the Phantom. Somehow though, Clouseau manages to catch Sir Charles and George red-handed when someone steals the diamond during a costume party. A car chase between two gorillas, one silver knight, a heap of cops, and an awkward zebra ensues until all vehicles collide into one pile next to a fountain; allowing Clouseau to get his man, er men.

However, neither Charles nor George stole the diamond. Simone soon discovers that Dala herself “stole” the diamond from her own safe. She’s afraid that someone will get it, and send it back to Lugash.

Simone, ever the helping hand, offers to take possession of the diamond for Dala. She then tries to help Sir Charles and George out of their predicament now that they will be on trial for the diamond caper. When all looks lost for out playboys, Princess Dala and Simone scheme to frame Clouseau instead.

They have the defense call Clouseau as a surprise witness. The barrister then grills him over whether or not he’s actually the Phantom. Clouseau begins to break under pressure, and when he pulls out his handkerchief to wipe his brow, the diamond, which Madame Clouseau planted on him, plops out of his shirt pocket.

It’s only as the police haul Clouseau away that Simone shows some compassion towards her husband. She doesn’t want to see him rot in prison, but Sir Charles calmly explains that, “it takes years for people to rot; and when the Phantom strikes again, he’ll be free as a bird.” He, Simone, and George drive away together to continue on with their life of crime. Dala leaves to go back to her country.

We cut to the police car, where the officers tell Clouseau that The Phantom, is both a national hero and a sex idol for millions of young women. They are envious of the position he’s now in. They ask him how he committed all those robberies, and Clouseau, still clueless over his wife’s betrayal, replies, “Well you know…it wasn’t easy.”

The film ends with the cartoon character of the Pink Panther returning as a police officer. A cop car runs him over, and when he gets up, we see The End spelled ThEnd. He then fixes it to The End after the sounds of the car crashing into something closes out the film.

Add The Pink Panther to your collection today!