When Charles Dreyfus escapes a mental asylum, he has one goal… kill Chief Inspector Jacques Clouseau. After his first attempt fails, Dreyfus switches plans. He sets out to build a Doomsday device and then demand the world’s nations kill Clouseau. The plan works and soon assassins from all over are after Clouseau. However, Clouseau is on a mission of his own… to capture Dreyfus and take him back to the asylum. 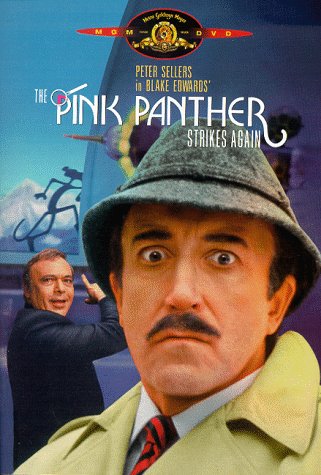 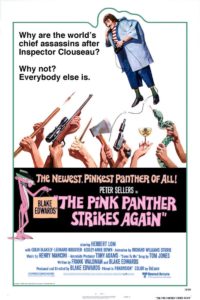 We find former Chief Inspector Charles Dreyfus (Herbert Lom) at a psychiatric hospital where he seems to have recovered from his psychotic episode where he planned to kill Jacques Clouseau (Peter Sellers). Clouseau, who is now the Chief Inspector of France’s Sûreté, speaks on Dreyfus’ behalf. Unfortunately for Dreyfus, Clouseau’s antics quickly causes him to relapse into insanity, and the hospital denies his release back into civilization.

However, Dreyfus later escapes the hospital, and he has one thing on his mind… KILL CLOUSEAU!

Back at his Parisian apartment, Clouseau’s manservant, Cato (Burt Kwouk), attacks Clouseau per his instruction to attack him when he leasts expects it. During the fight, a bomb arrives which destroys his apartment and injures Cato, but Clouseau himself is unharmed thanks to a malfunction in his inflatable disguise he’s wearing.

Disappointed with his assassination attempt, Dreyfus hires a small army of assassins to kill Clouseau. He also kidnaps a nuclear physicist named Professor Hugo Fassbender (Richard Vernon) and his daughter, Margo (Briony McRoberts). Dreyfus uses Margo to force the good professor to build him a doomsday weapon in exchange for their release.

When Clouseau heads to the UK to investigate Fassbender’s disappearance, he winds up destroying their house before bumbling through an interrogation with Fassbender’s cross-dressing butler, Jarvis (Michael Robbins). Dreyfus’ assassins soon kill Jarvis because he knows too much, but Clouseau is able to get a clue out of him before he dies. This clue leads him to Munich, West Germany for Oktoberfest.

Back at Dreyfus’ evil lair, Fassbender’s weapon is ready, and Dreyfus gives it a test run by disintegrating the United Nations building in NYC. He then hops on closed circuit television to blackmail the world’s leaders to kill Clouseau or else.

The leaders take Dreyfus at face value, and several of them send their own assassins to kill Clouseau at the Oktoberfest. Clouseau is completely oblivious to the danger to his life even after two assassins accidentally shoot each other in bathroom stalls while Clouseau poos.

Wanting to get their own hands on Dreyfus’ doomsday device, the leaders also order their assassins to kill the other assassins if necessary. As Clouseau bumbles, about he unwittingly evades each assassination attempt. In the end, each assassin winds up dead until only the Egyptian (Omar Sharif) and the Soviet agent, Olga Bariosova (Lesley-Anne Down), remain.

When Clouseau gets there, he’s pleasantly surprised to find the beautiful woman in his bed. However, when she declares her undying passion for him, he’s a bit perplexed. When he then finds Tournier dead in his bath, he’s really confused. However, Tournier has a tattoo which leads Clouseau to Dreyfus’s location at a castle in Bavaria, Germany.

At the castle, news reaches Dreyfus of Clouseau’s death. While he’s elated, a terrible toothache spoils his celebration. So he sends for a dentist to fix it. When Clouseau hears someone has requested a dentist at the castle, he disguises himself as a German dentist and hightails it over because the castle’s drawbridge foiled his earlier attempts at sneaking in.

Once inside, Dreyfus doesn’t recognize Clouseau as the dentist, even when he bumbles the administering of the nitrous oxide anesthetic. Both men wind up drunk on the gas and Clouseau pulls the wrong tooth. Dreyfus knows there’s only one man in the world who could pull the wrong tooth. He yells at his minions to kill Clouseau, but Clouseau escapes.

Now bat-shit crazy, Dreyfus prepares to destroy England with his doomsday device. Once again though, Clouseau unwittingly saves the day when a medieval catapult shoots him on top of the doomsday device. It begins to malfunction before firing on Dreyfus and the castle.

Dreyfus’ last few minions, along with Fassbender, his daughter, and Clouseau escape as the castle dissolves into oblivion. Dreyfus, for his part, plays “Tiptoe Through the Tulips” on the castle’s pipe organ as he disintegrates.

Clouseau returns to Paris where he finds Olga waiting for him. Before the two can do the dirty, Clouseau bumbles with removing his clothes. Then when all seems well, Cato attacks. Clouseau’s wall bed snaps back up from Cato jumping on them, and they crash back through the wall and into the Seine river.

The cartoon version of Clouseau pops up and begins swimming. A gigantic Pink Panther lurks below with a shark mouth wide open. The film ends as Clouseau chases the Pink Panther up the Seine.