On his first day on the job at a medical supply warehouse, poor Freddy unwittingly releases toxic gas from a secret U.S. military canister; unleashing an unbelievable terror. The gas reanimates an army of corpses, who arise from their graves with a ravenous hunger for human brains! Luckily for those carnivorous cadavers, there’s a group of partying teens nearby, just waiting to be eaten!

‘The Return Of The Living Dead’ Movie Summary 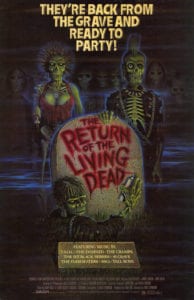 In The Return Of The Living Dead, Freddy is a new employee at Uneeda Medical Supply. Frank, the foreman shows him the cadavers and other no longer living things in the warehouse. He even shows them a secret military drum down in the basement. Frank kicks the drum to show how secure it is, but like anything made by the government, this drum is unstable and releases some sort of gas into the warehouse and on Frank and Freddie.

We learn that the army has been searching for this container for 25 years, and has no idea where it is.

They start hearing noises coming from the cadaver locker and soon realize that the dead dude ain’t dead no more. They decapitate the reanimated body, but that still doesn’t kill it, so they take it to the cemetery across the street to the crematorium – brilliant.

Freddy’s girlfriend Tina and his punk friends, Spider, Trash, Chuck, Casey, Scuz, and Suicide, just happen to be in that cemetery waiting for Freddy’s shift to be over and what better way to pass the time than to watch one of your friend Trash ( a girl and appropriately named) strip down naked on a headstone?

Freddy and Frank cremate the body and the smoke from the furnace is released into the atmosphere, but just then the rain starts, soaking the entire graveyard.

They go after everything living in the area. The Punks hook up with Freddy, Frank and the Crematorium guy, and Burt, the owner of Uneeda Medical supply, but they learn that the gas has also turned Freddy and Frank into Zombies.

Some of the Punks, including Trash the whore, get eaten and turned into zombies. Freddy attacks Tina for her brains, but she is saved by the surviving humans.

The survivors find themselves in the basement with the military drum that started it all. They call the number on the drum and tell the Army official where the drum is. He’s been waiting for this phone call for 25 years and know just how to solve the problem.

He releases the “containment protocol” which is a nuclear bomb that destroys 20 blocks and only kills 4000 people which the government considers “optimal”.

He tells the higher ups to not be concerned by the burning skin that people are feeling and that the rain will wash everything away…just in time for the President’s visit.