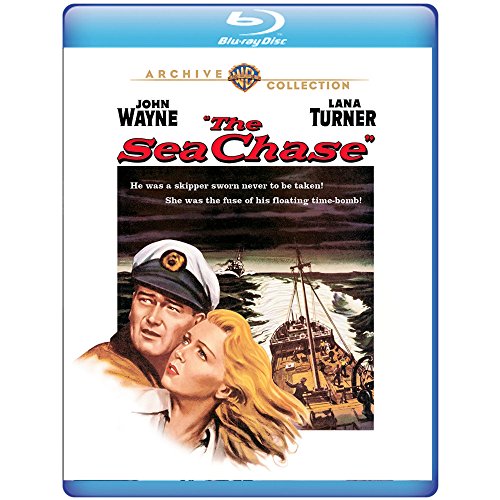 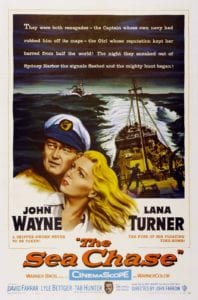 In The Sea Chase, Karl Ehrlich, played by John Wayne, is the captain of the old German steam freighter Ergenstrasse. The Ergenstrasse sits in the port of Sydney, Australia on the eve of the Second World War. Ehrlich is a former member of the German Navy who lost his rank and position; refusing to support the Nazi Party. Now relegated to captaining steam freighters, Ehrlich is a man who loves his country but hates those in charge.

As the Ergenstrasse prepares to head out to sea, Ehrlich is visited by an old friend, British Commander Jeff Napier. Napier introduces Ehrlich to his new fiancée, Elsa Keller, whom the German captain recognizes from a previous encounter. Once Elsa and Ehrlich are alone, Ehrlich tells Elsa that she needs to break off the engagement with his friend. If she doesn’t, he will tell Napier about her notorious past. Elsa concedes, and disappears from Napier’s life.

Meanwhile, Germany has invaded Poland, and war is imminent. The Ergenstrasse faces internment unless Ehrlich can sneak his ship out of port under the British fleet’s noses. Before he can begin his escape, Ehrlich receives a visit from the German Consul-General. He asks Ehrlich to take with him a spy to prevent the spy’s capture. It is only after the Ergenstrasse slips out of harbor in thick fog that Ehrlich discovers the spy is Elsa.

The Ergenstrasse is short on fuel, so Ehrlich makes a daring plan to take the long way back to Germany. The pursuing fleets consider Ehrlich’s ship as old and slow, and easy prey. Especially by Napier, who now holds a grudge against Ehrlich now for breaking up his engagement. Napier is the only man who does not underestimate Ehrlich and believes the German captain will attempt the unexpected. The wily captain leads his enemies on a chase across the Pacific Ocean; beginning with a run to the south, and pausing for supplies at an unmanned rescue station on Auckland Island.

While there, Ehrlich’s first officer, the pro-Nazi Kirchner, murders three marooned seamen for absolutely no reason whatsoever. Because that is what Nazi’s do in films. Kirchner doesn’t tell Ehrlich about what he has done. Later, Napier discovers the bodies while in pursuit and believes his old friend is responsible. The British Commander vows to bring the German captain and his crew to justice as war criminals.

In his desperate journey, Ehrlich burns the ship’s lifeboats for fuel; upsetting the crew, then stops for wood at the Pom Pom Galli Atoll in mid-Pacific. While there, Ehrlich discovers that Kirchner murdered the fishermen and forces him to sign an account of his actions. Elsa and Ehrlich fall for each other while anchored off Pom Pom Galli.

Soon after, the German ship leaves the mid-Pacific and heads to Valparaiso in neutral Chile. Once there, Ehrlich encounters Napier, who is mistakeningly angered with the German captain for the murders. Napier threatens to capture the Ergenstrasse, or sink her, if she dares to try to leave the neutral Chilean harbor.

However, the Ergenstasse crew is lucky. Their fully fueled ship slips away in the darkness of night when the British fleet leaves to support another ship. Napier, obsessed with finding Ehrlich, requests a transfer to the British Naval ships in the North Sea; believing that Ehrlich must pass through the patrols in his attempt to reach Germany.

For political reasons, German radio broadcasts a message that discloses the position of the Ergenstrasse as it passes Norway; thus giving up the ship and crew to the Royal Navy and to the waiting Napier. The British Commander attempts to get the Ergenstrasse to surrender, but Ehrlich orders everyone, save Kirchner, to abandon ship. He gives his log to his crew to turn over to Napier.

Unknown to Ehrlich, Elsa stays on board, bound and determined to be with the man she loves. Ehrlich then attempts to make a break for it, which he knows he will be unsuccessful. Napier begins firing on the steamer, ultimately sinking it in the North Sea. The fates of Ehrlich, Elsa and Kirchner left undetermined. The Ergenstrasse’s crew delivers the ship’s log to Napier and proves Ehrlich innocent of the Auckland incident.