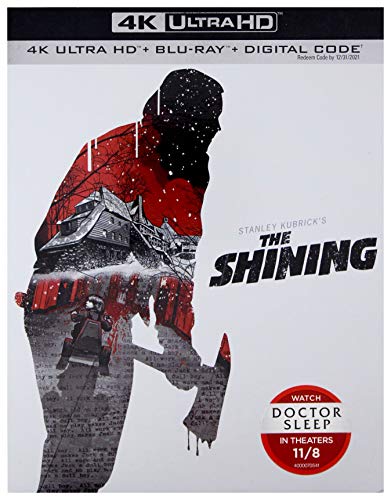 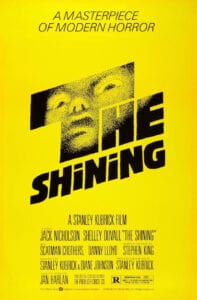 In 1980’s The Shining, we set out on a long and winding road up the Colorado Rockies. The tormented writer, Jack Torrance, approaches the Overlook Hotel for an interview as its winter caretaker. Since the hotel will be closed for the season, Jack will have plenty of time to break his writer’s block.

During the interview, the hotel manager tells Jack of a previous caretaker who came down with a terrible case of cabin fever; resulting in the murder of his family. This doesn’t deter Jack, and he takes the job. However, when back home, he finds his son, Danny, is afraid to go with him.

Danny has learned from his mystical finger, Tony, that there is something sinister at the hotel. After Danny freaks out, his mother, Wendy, fails to calm him down, but off our happy family goes anyhow. They arrive at the hotel just as it is shutting down for the season.

During a tour of the facility, Danny meets Hallorann who has Danny’s gift for seeing dead people, which he calls The Shine. Telepathically, Hallorann offers the boy some ice cream, and the two bond. When Danny asks him why Room 237 is so scary, Hallorann dodges the question. He tells him that the hotel has a shine to it too, and to leave Room 237 alone.

After a month of caretaking, Jack hits a wall with his writing, and no amount of staring into mirrors will help him with that block. Danny and his mother decide to run through the hotel’s hedge maze to pass the time, but this only occupies them for so long.

As time progresses, Wendy becomes more and more concerned about contact with the outside world—especially when the phone lines go down. Danny too becomes more and more scared of the hotel as his premonitions become even more frightening. At the same time, this fear seems to correspond with Jack’s increasingly erratic and violent behavior.

One day, on a Big-wheel tour of the hotel, Danny is surprised to see the door to Room 237 open. Ignoring Hallorann’s advice, he goes inside. What exactly happens in there we shall never know, but Danny later stumbles into the lobby where his Dad and Mother are sitting. He is bruised and beaten.

Wendy blames Jack of abusing him which leads to Jack storming off to the Gold Room. There, he meets a more human than human ghost named Lloyd who patiently listens to Jack from behind the bar. Wendy soon interrupts Jack to tell him that Danny believes a naked woman in a bathtub injured him. Hearing this, Jack goes to explore Room 237. He too meets the aforementioned woman, but he tells Wendy nothing happened.

Now, Wendy wants to leave the hotel with Danny so he will be safe, but Jack argues that she is just trying to make him look bad to his bosses. He storms off to the Gold Room again where it is now filled with partying ghosts. There, Jack runs into an old friend named Grady who was the killer caretaker back in the day. He tells Jack to get his shit together and “correct” his wife and child. Jack says this is something he can do.

We cut to a place somewhere the middle of Florida where Hallorann relaxes at his home. He has a premonition of Danny back in Colorado which haunts him. So he hops the next flight back to the hotel to investigate.

Back at the hotel, Danny now refers to himself as Tony, and only speaks the words red rum over and over. Wendy comes across Jack’s typewriter when she is out looking for him, and reads what he has been writing all this time. It’s 200 pages of the same sentence: “All work and no play makes Jack a dull boy.” Jack finds her reading his love note to the voices in his head, and becomes cross with Wendy. Frightened, she hits him in the head with a bat, drags him to the kitchen, and locks him in the pantry.

Jack wakes, and once he realizes he’s trapped in the pantry, he tells Wendy that she is just as trapped in the hotel as he is because he destroyed both the two-way radio and the snowcat. Wendy runs off with a knife in her hand to see if Jack is telling the truth. While she’s out, Jack chats it up with Grady one last time before escaping the pantry.

Back in his room, Danny finds his mother’s red lipstick. He takes it, and writes redrum one the door. Wendy freaks out when she sees its reflection in the mirror, and notices it spells murder. Jack soon catches up to Wendy and Danny. With an axe in his hand, he chops through door after door until his wife and son are trapped in the bathroom. Danny escapes out the window, but Wendy can’t fit through. Jack breaks a hole in the bathroom door large enough for him to stick his face through it, but Wendy cuts him before he can unlock the door. Jack flees.

Finally, Hallorann arrives to save the day in a new snowcat that he borrowed. As he walks around looking for the family, he forgets he has the Shine and doesn’t bother to contact Danny telepathically…or does he? Before that is revealed, Jack finds him, and gives him a nice chop to the torso with the axe. Hallorann and his Shine fall to the ground, dead. This distracts Jack long enough for Danny to run outside to hide in the snowy maze.

Jack chases after him; following his son’s freshly cast footprints. However, Danny is a smart one, and starts to cover up his tracks. This confuses Jack—allowing Danny to run out of the maze where he finds his mother. The two drive off in Hallorann’s snowcat to safety.

Jack, now lost in the maze, freezes to death in it. The movie ends with the song, Midnight, the Stars, and You, softly playing. The camera zooms in on a photo at the hotel from a Fourth of July party in 1921. We see a smiling Jack in the middle of it all.