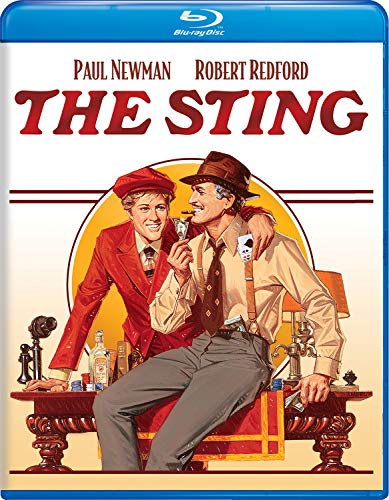 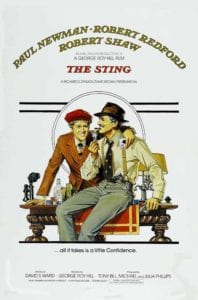 “The Sting” is the story of a small-time grifter that learns how to play “The Big Con” once his partner is killed and a contract is put on his head. Robert Redford plays small-time grifter Hooker who, with his partner, Luther, pickpocket a hoodlum and make their getaway. However, unbeknownst to them, the mark works for big-time, nasty New York mobster and uber-shark-hunter-to-be Robert Shaw playing as Doyle Lonnegan.

Hooker and Luther are ecstatic to pocket $11,000 but don’t realize Lonigan has now ordered them dead. Hooker goes to a cat house casino and blows his share on one roulette roll and loses it all. While he is at the casino, Luther is murdered by Lonnegan’s hoods so Hooker goes on the lamb.

He heads to Kansas City where he comes under the wing of Luther’s former partner, Henry Gondorff, played with a drunken twinkle in his eye by Paul Newman. Gondorff heard the beloved Luther was murdered and sends word out to gather all the grifters that want to get even with Luther’s mobster.

The grifter gang of nameless, gifted dozens finds out Lonnegan plays cards on a train so Gondorff joins the game and out-cheats Lonigan and makes a mortal enemy. When Gondorff sends Hooker for the winnings, Lonnegan threatens to kill Hooker before Hooker offers a way to get even with Gondorff by breaking his illegal gambling business. Lonnegan plans to meet Hooker in an off-track betting office run by Gondorff, that is set up by the grifter gang.

Once Hooker tells Lonnegan they have a way to cheat the track by knowing results ahead of time, Lonnegan wins multiple times with Gondorff and Hooker working both sides until we don’t know who is conning who. With Lonnegan’s goons always around the next corner, a crooked detective wanting thousands in dirty money, and the feds closing in on Hooker, Hooker has to do some fancy footwork to work his way out of a death sentence and fleece the mob boss for half-million dollars.

Will Hooker be able to pull off “The Big Con” before it all comes crashing down on everyone with bullets, crooked cops, angry mobsters and crazy grifters at every turn? Watch “The Sting” to find out.