BI finds out Harry has been killed by a truck and carried by two (or is it three?) men, so BI is homeless.

BI is picked up by police for questioning at the funeral where he spots Czech/Russian/German Hot Girl (CRGHG), then he’s given a ticket back to USA, which he promptly throws away.

BI stumbles (literally) upon CRGHG acting in a local play where everyone speaks Austrian except the CRGHG and BI.

BI questions CRGHG while drinking a lot of alcohol. BI and CRGHG are picked up by the police where (surprise!) CRGHG has forged papers – but of course she’s let go by the police.

BI goes back to first hotel and the porter tells him he has evidence but won’t talk to BI until later tonight. Guess what happens to the porter? Yep. He’s a goner.

After more drinking, BI and CRGHG head back to the hotel to meet the porter but, because some 2-year-old that says “Dada” over and over (and flipping over….) toward BI, the ENTIRE audience thinks BI killed the porter so he runs away, even though he has zero reason to run away.

BI gets drunk and goes back to CRGHG’s apartment to seduce her even though she has zero feelings for the guy where her cat hates him because the cat only loved Harry conveniently. Moments later, the cat is two blocks up the deserted street and cuddles up in a dark corner to (surprise!) a man’s shoe that’s attached to a shadowy figure.
After being rebuffed by CRGHG, the drunk BI stumbles out onto the street and of course notices the flipping cat AND the shadow, which belongs to (surprise!) Harry.

The BI goes to stranger w/ an ugly dog’s apartment and tells him to have Harry meet him (surprise!) at an amusement park ferris wheel that conveniently has a door that opens when it’s at the top.

The BI and Harry climb into said ferris wheel and Harry threatens BI with splatting on the concrete below (because all friends joke around like that). Harry shuts the door as they descend.

For the remainder of the third act, BI turns in Harry to the police, police exhume the body of a missing guy who (surprise!) wasn’t Harry, police threaten to deport CRGHG to Russia, BI makes a deal to save CRGHG in exchange for info on Harry but CRGHG (surprise!) jumps off the train that took her to a safe future because… BI just happened to walk into a cantina on the train platform at that precise moment. BI tries seducing her again – when she clearly only wants Harry. CRGHG runs away. BI makes a deal with the police to have Harry arrested. At the handover, the ENTIRE Vienna police department hovers over BI in the café when CRGHG walks in and gets mad at BI. Just then, Harry walks in the COMPLETELY UNGUARDED back door with a gun. The police give chase but Harry exits the same back door and for the next 10 FLIPPING MINUTES OF PAINFUL ZITHER MUSIC (that plays throughout the ENTIRE movie btw), we see an extensive underground crypt chase by Harry against the entire inept Vienna police force (with dogs btw that stay ABOVE GROUND while the chase happens underground). From long distance because a hundred cops never got near him (how flipping HUGE are the Vienna sewers anyway??), Harry shoots the nicest cop in the movie. Harry is shot by the police but while the whole police force mourns over the dead body of the nice cop, BI walks off WITH THAT GUY’S GUN and finds the mortally wounded Harry on the stairs. We hear a gunshot and BI walks back out of the smoke. Of course, it never occurred to the police that Harry faked his death once and this is his friend who just walked back with a gun. He couldn’t fake his own death AGAIN, could he? We never know. We see another casket. Another funeral. Another CRGHG walking away from the burial. BI is riding from the funeral with the police back to the airport but BI asks to be let out so he can wait for the CRGHG to walk FOR TWO MINUTES ONSCREEN before she just walks right by him out of frame and the Blithering Idiot just stands there smoking a cigarette. THE END (I kid you not).

That’s the entire movie. Feel free to watch it but you’ll get more out of my two minute diatribe above and have 90 minutes of extra life to spend on something worthwhile other than to watch this “masterpiece” movie that is anything but. Happy viewing. 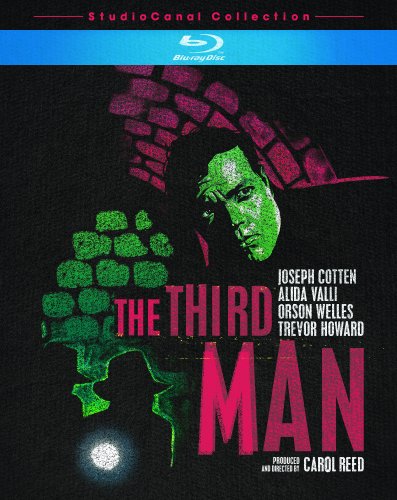 Pulp novelist, Holly Martins, travels to postwar Vienna, only to find himself investigating the death of his old friend, Harry Lime.