Down-on-his-luck former journalist, Jack Brown, struggles to make ends meet working as a night janitor at business tycoon U.S. Bates’ department store. After seeing Jack play with store toys one night, U.S. Bates’ pampered son, Eric, demands to take Jack home to be his toy for one week. Desperate for money, Jack agrees to the deal but soon realizes that underneath the boy’s facade, Eric is, in fact, a good kid in need of a real friend, but above all, an unhappy son in need of a real father. 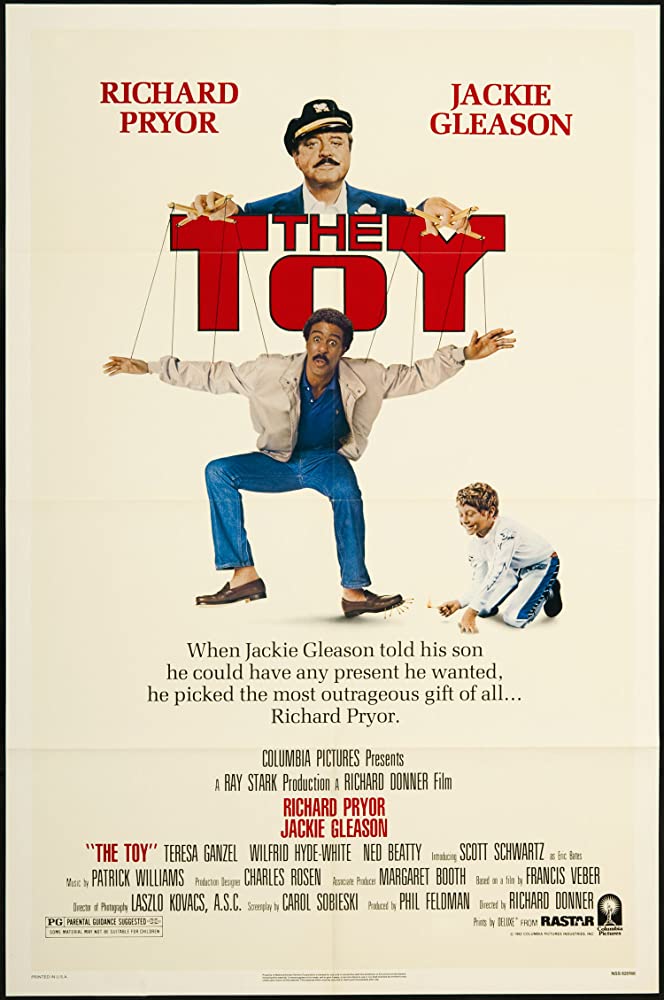 Jack Brown (Richard Pryor) in an unemployed writer living in the fictional town of Bates, Louisiana. Jack lives with his wife Angela (Annazette Chase) in a rundown house that the bank is threatening to foreclose on unless Jack can come up with $10,000 in a couple of weeks. Jack wants to be a journalist for the local paper, The Bugle, which is owned by local millionaire and ruthless businessman U.S. Bates (Jackie Gleason). However, the paper never seems to be hiring, which Jack believes to be for racist reasons.

Jack is desperate for a job and is able to blackmail his way into the Bates’ company as a cleaning woman. On his first day, Jack is forced to wear a woman’s cleaning woman outfit and serve lunch to Bates and his board. The lunch does not go well, and Jack’s manages to anger U.S. to the point that he is fired. However, Jack continues to work for the company and cleans the Bates’ department store at night. On his first night cleaning, U.S.’s son, Eric “Master” Bates (Scott Schwartz) comes into the store to pick any toy that he wants. Eric chooses Jack as his toy. Sydney Morehouse (Ned Beatty), U.S.’s loyal right hand man, offers Jack a lot of money to entertain Eric for the one week that U.S. has custody of his son. Jack reluctantly accepts due to the impending foreclosure of his home.

Eric is a spoiled boy, who spends most of the year at the military school that U.S. sends him to. The long periods of time away from his father have left father and son estranged. Eric does not understand that there is consequences for his behavior and does whatever he wants whenever he wants. Jack arrives at the Bates’ estate in a shipping crate. Jack immediately regrets his decision and attempts to leave. U.S. meets with him and tries to negotiate a price for Jack’s services. Jack tries to get a job on the paper, but settles for $2,500 for the week. Jack tries to “play” with Eric, but finds that Eric just wants to put him through one humiliating experience after another.

The next night, Jack has had enough of the humiliation and attempts to leave. He walks through the house looking for his clothes, not wanting to return home in Spider-Man pajamas. He runs into U.S.’s ditzy trophy wife Fancy (Teresa Ganzel) in the hallway. Fancy takes Jack into a dinner party that U.S. is hosting and introduces him as Eric’s new toy. Jack is further humiliated and leaves the mansion without his clothes.

Later that night, Morehouse shows up drunk at Jack’s door. He hands Jack an envelope from U.S. that contains a check for $10,000.00, the entire amount needed to stop foreclosure on Jack’s home. Jack reconsiders his position in light of the outrageous sum of money. He returns to the Bates’ estate the next morning. He and Eric actually begin to play, and Jack teaches Eric how a friend is supposed to be treated.

Jack and Eric decide to start a newspaper of their own. They interview various people involved in the Bates’ corporation and those working in the mansion. It begins to become clear to Eric that his father is not only a cruel employer and but not a good person. They publish their paper and distribute it around the city. Morehouse finds a copy and gives it to U.S. He summons Jack and Eric to his office and orders Morehouse to find every copy in the city and destroy them. Eric tells his father that he will just make more, that U.S. cannot stop the truth.

U.S. tells his son that his money and power define what the truth is. He tells Eric that people will say whatever he wants them to say because they don’t want to lose their jobs. To prove his point, he has Morehouse drop his pants in front of Eric and Jack. Additionally, U.S. offers Jack a job as a reporter starting the Monday after Eric leaves to show that his money buys loyalty. Jack accepts the job. Eric becomes angry with Jack for taking the job, but calms down after Jack explains that he doesn’t live in Eric’s world and that he has to find a way to support himself and his wife.

The next day, U.S. is hosting a fundraiser for a Senator on his estate. Unbeknownst to the Senator, U.S. has invited members of the Ku Klux Klan to attend the party as well. Angela shows up with her protest group to draw attention to what U.S. is doing; however, Jack is able to convince her to leave when he says he will handle everything. U.S.’s true purpose of the party is to get a picture of the Senator with the Grand Wizard of the KKK so that he could use it as blackmail against the Senator to force the Senator to pass tax cuts that would benefit U.S.

Jack and Eric team up to disrupt the party. They drive in on a motorcycle and a go-cart. They inform the Senator of U.S.’s plan causing the politician to immediately leave. They terrorize the remaining party goers who eventually engage in a food fight. U.S. jumps on his golf cart and chases after Eric and Jack. U.S. accidentally drives into the pool, and Jack jumps in to save his life.

That night, U.S. thanks Jack for saving his life and relieves him of any additional responsibilities with Eric. Jack tells U.S. that his son loves him and that they both need to learn to talk to each other. Jack even role plays with U.S. to help the millionaire understand how he should talk to his son.

The next day, U.S. tries to talk to his son while he is taking Eric to the airport to return to military school. Eric jumps out of the car and runs away to Jack’s house. He begs Jack to let him live with him, but Jack refuses and tells Eric that he needs to give his father a chance. U.S. arrives and confesses to his son how much he loves him, which Eric finally accepts. Father and son embrace, finally bridging the gap of silence between them. U.S. tells Jack that his offer on the paper still stands, and that next year when Eric comes to visit, he will spend one week with U.S. and one week with Jack. After Eric and U.S. leave, another millionaire pulls up in front of Jack’s house and tries to hire him to help her with her son. Jack runs away in fear.

How the Grinch Stole Christmas (2000)

How the Grinch Stole Christmas (2000)