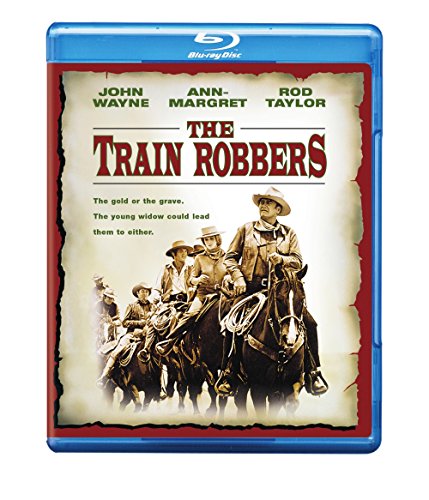 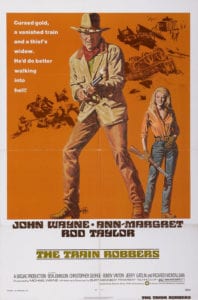 The Train Robbers begins after the death of Mrs. Lowe’s husband, Matt. He was a train robber, and she intends to tell the railroad where to find $500,000 in gold he stole from one such robbery in order to clear her family name for her son.

However, the wise-old cowboy, Lane (John Wayne), convinces her that retrieve the gold to collect the $50,000 in reward money the railroad’s offering for its return is a better deal. Lane finds some equally old friends to help find the gold for a share of the reward.

However, the other train robbers from the original heist with Matt have a little gang of their own, and they will stop at nothing to get it back. They all mosey on down to Mexico in search of the gold, but following closely behind them all is The Pinkerton Man.

Finally, after much struggle, they return to Texas with the gold for one last confrontation. Victorious, Lane and his men put Mrs. Lowe on a train the next day to return the stolen gold and collect the reward. As a token of goodwill, the men let Mrs. Lowe keep the reward for herself and her son.

As the train sets out, the men walk past the end of the train they meet the Pinkerton Agent. He tells them that Matt Lowe was never married, and that Mrs. Lowe is actually a prostitute named Lilly who tricked them into helping her to get the gold for herself.

Looking like chumps, Lane and his boys head out to rob that train as the film ends.

User Rating: Be the first one !
May 15, 2019
2 minutes read
Show More
Back to top button
Close
Close