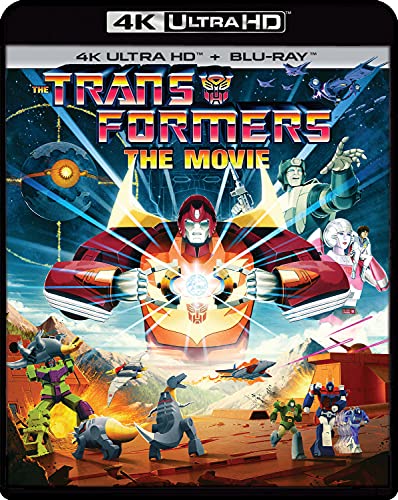 ‘The Transformers: The Movie’ Movie Summary 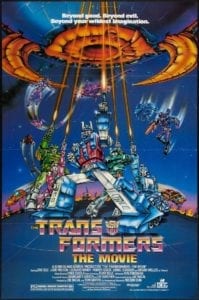 Transformers: The Movie, not to be confused with Transformers the movie, is a timeless tale of redemption, coming of age, and giant robots beating the metallic snot out of each other. The movie takes place in distant future of 2005 – a carefree future where children use hover-boards and cassette tapes, which have replaced inferior MP3s.

The movie opens with Unicron, a metallic, space-anus, with the thundering voice of Orson Wells, munching on random worlds for breakfast. Why? We aren’t told, but it may have something to do with his missing sled being stolen by that environmental do-gooder, Captain Planet.

After a bitchin’ opening credit montage, that was only outdone by the epic thriller “Rad“, the movie cuts to the good Autobots on their spaceship planning a counter-strike on the evil Decepticons. Little do the Autobots’ know, but the Decepticons witnessed their entire planning session…in space…through vacuum-proof glass…with perfect audio and video.

Meanwhile, Hot-Rod, the second most fabulous Autobot, is fishing with his 10-year-old “special friend”, but their romantic date is spoiled when the Decepticons attack a nearly defenseless Autobot City. Among the handful of defenders is an Autobot named “Blur”, who is voiced by the Micromachine guy during a meth binge.

A battle ensues with the Decepticons kicking some Autobot-ass until Optimus Prime, the leader of the Autobots, comes rolling up and ruining a bunch of Decepticon’s shit. The whole battle stops when the much-anticipated encounter between Megatron, the leader of the Decepticons, has a show down with Optimus. Megatron pulls out some sort of light-saber/Voltron-like sword, never seen before in the movie or TV show, and waves it in the air like he just don’t care.

He slashes Optimus–the only likeable character in this piece of shit movie – straight through the heart. Our hero is mortally wounded ten minutes into the goddamn movie, and Hot Rod isn’t going to save anything! After seeing their leader fall, the Autobots rally, causing the Decepticons to escape via the Astro SOULLLLLLLLLL train. One would think that it would drive away like a normal train, but this train flies … without wings. Doc Brown ain’t the only one who don’t need roads where he’s going.

Optimus Prime, on this deathbed, passes the “Leadership Matrix” to the next leader of the Autobots. However, the Matrix falls, and in foreshadowing thicker than a McDonald’s shake, Hot-Rod catches it before passing it to the intended recipient.

Next, Starscream, the whiniest of the Decepticons, stages a coup and dumps a wounded Megatron off the Astrotrain, which is now inexplicably a purple space shuttle, and into the void of space.

Megatron eventually floats by Unicron. Rather than eating Megatron, Unicron follows the orders of Hasbro and upgrades Megatron to Galvatron. He then provides Galvatron new minions to take back control of the Decepticons and steal the lunch money of millions of loyal fans. All Unicron asks for in exchange is for the Decepticons to destroy the “Leadership Matrix.” Why does he need help destroying a football-sized piece of metal when he can FUCKING DESTROY PLANETS IN FIVE MINUTES? Well, for the same reason the Death Star flew around Yavin to get to the rebel base on the far side of its moon instead of blowing the big ball of gas out of the galaxy. Wait. I don’t know the reason for that one either.

Anyhow, the movie then rambles from scene to scene without really advancing the plot, story, or character development until the remaining Autobots all meet up on the aptly named Planet Junk with the Decepticons in hot-pursuit. During the ensuing battle, Galvatron takes the Leadership Matrix from the Autobots and then flees to double-cross Unicron.

Unicron does not take kindly to Galvatron’s treachery and attacks the Decepticon-held Cybertron, the home planet of all Transformers. The Autobots come across the battle between Unicron and the Decepticons, and decide the most prudent course of action is to enter Unicron through his eye like they do at Beggar’s Canyon back home.

Once deep inside the bowels of the Giant Space Anus, Hot Rod finds Galvatron with the Leadership Matrix. The two fight, and Hot Rod snatches the matrix from him. Since “HE GOT THE TOUCH”, the matrix magically opens up for Hot Rod quicker than Kim K can for an NBA bench warmer. The Matrix upgrades Hot Rod to Rodimus, who transforms into a cross between a Ford Tarus and a dump truck. I smell a new action figure coming to a store near you.

With the opening of the Matrix, an ensuing energy blast fucks Unicron’s shit up, but everyone inside him is unaffected. The battle is over. The Autobots have a new leader. The Decepticons escape, and Unicron’s disembodied head is left to float in space until Michael Bay can reboot it, and cause it to explode in a dramatic fashion.